The MOAS office is made up of professional and experienced humanitarians and occasionally they’re given the opportunity to witness what we do first hand. Paula Galea, Media Officer, describes how her time on board the Responder impacted her.

Today marks a year since I started working at MOAS. Before joining the organisation, like many others, I followed their search-and-rescue operations closely; in awe at how simple their act of humanity was in a field of work that is so heavily weighed down by complexities, political and otherwise. When a chance came to join the communications team, I jumped at the opportunity. I was determined to play a part, no matter how small, in the response to what I believe is the greatest humanitarian crisis of my generation.

For 10 months, I worked in the head office, promoting MOAS’ very simple mantra: that ‘No One Deserves to Die at Sea’. Throughout this time, I had never seen or experienced the rescues first hand, and although my work was often met with a generous and heart-warming response it was also met with a level of racism and racial intolerance I had never experienced before. I understand that people fear the unknown; and that the great numbers of displaced people [65.3 million people this year] seen in the news can seem overwhelming. What escapes my realm of understanding, however, is that a person could react to other people’s suffering (and sometimes death) with hatred, joy or even indifference. My feelings in this regard were about to be validated by the experiences I was to have on board.

The opportunity arose for me to shadow one of our crews on a search-and-rescue mission. I would finally witness first-hand the life-saving efforts I had been telling others about for so long. In some ways, my week on the Responder was exactly what I anticipated, on the other, the experience is indescribable. While a few rescues were conducted during that week, one rescue will remain with me. 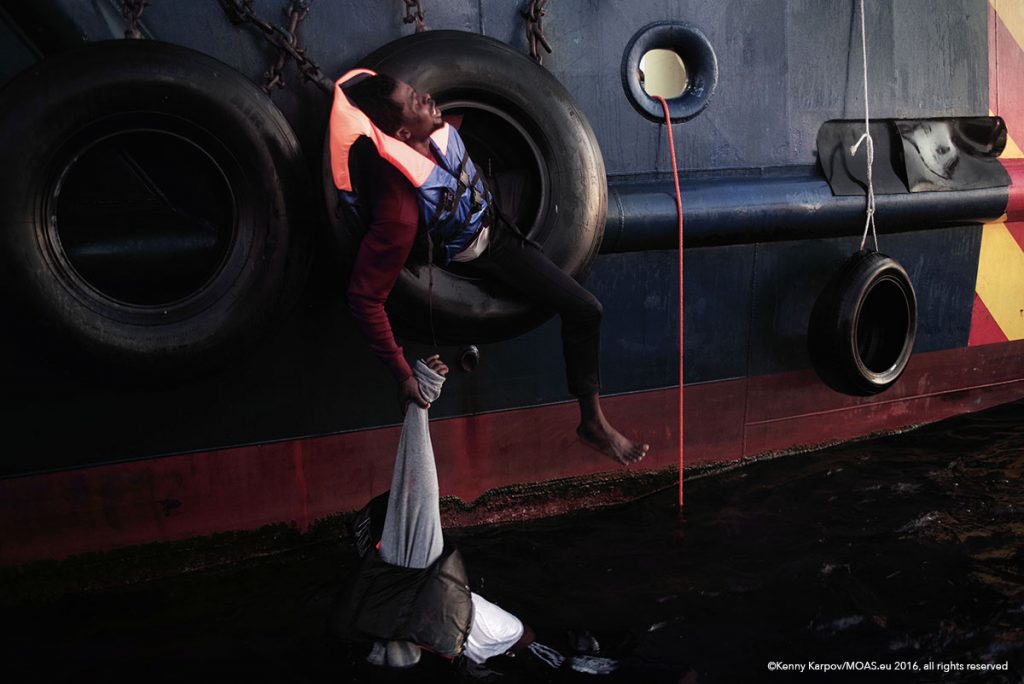 Following several successful operations, early one morning we approached an overcrowded rubber boat that had partly deflated. The rescue commenced but as caustic fuel had been leaking into the boat and surrounding water, panic ensued, further destabilising the dinghy. Dozens of people were thrown into the water and although we were lucky enough to have rescued the children from the boat in time seven people lost their lives in what was one of the most challenging and emotional of MOAS’ rescues to date.

Sky news happened to be on board at the time and their piece on this rescue can be seen below:

Our crews are made up of professional individuals with years of experience, allowing most of the operations we conduct to go off without a hitch. Still, this makes it easy to forget that they operate in extremely difficult and volatile conditions, where fatalities occur on a near daily basis. That day I played witness to the incredible work our crews do daily. They do it with the utmost pride and respect for those we are out there to serve.

The day also happened to be my mother’s birthday, the first one I had missed in a long time. That evening, tired and sitting with the crew talking about the day’s happenings, I started to receive photos and videos of my family surprising my mother with a cake and singing happy birthday. It was exactly what I needed; and I could only hope that the people we’d rescued that day would soon find the same happiness I felt seeing my family, gathered together in the safety of our kitchen. Feeling grateful and with a new perspective, I wrangled two of the guys to join me in a birthday video for my mother from the middle of the Mediterranean.