On the 1st of April 2017, MOAS launched our fourth search and rescue mission in the Central Mediterranean. Thanks to the dedication and commitment of our donors and supporters, MOAS’ SAR vessel, the Phoenix, sailed from Malta, waved off by the crew’s families and the shore-based MOAS team. In this blog, we briefly explore the preparations our team have been making for new mission, before looking at the equipment – both old and new- that our crews will be using.

Since the end of the 2016 Central Mediterranean mission in December, our crews have been busy preparing to go back to sea by working on vital maintenance and upgrades on the Phoenix. The vessel has been fully repainted, and a new propeller has been fitted.

On Saturday, the final stocks of the post-rescue care provisions, including water, food, blankets and medical supplies for the onboard clinic were brought on board and stored away. 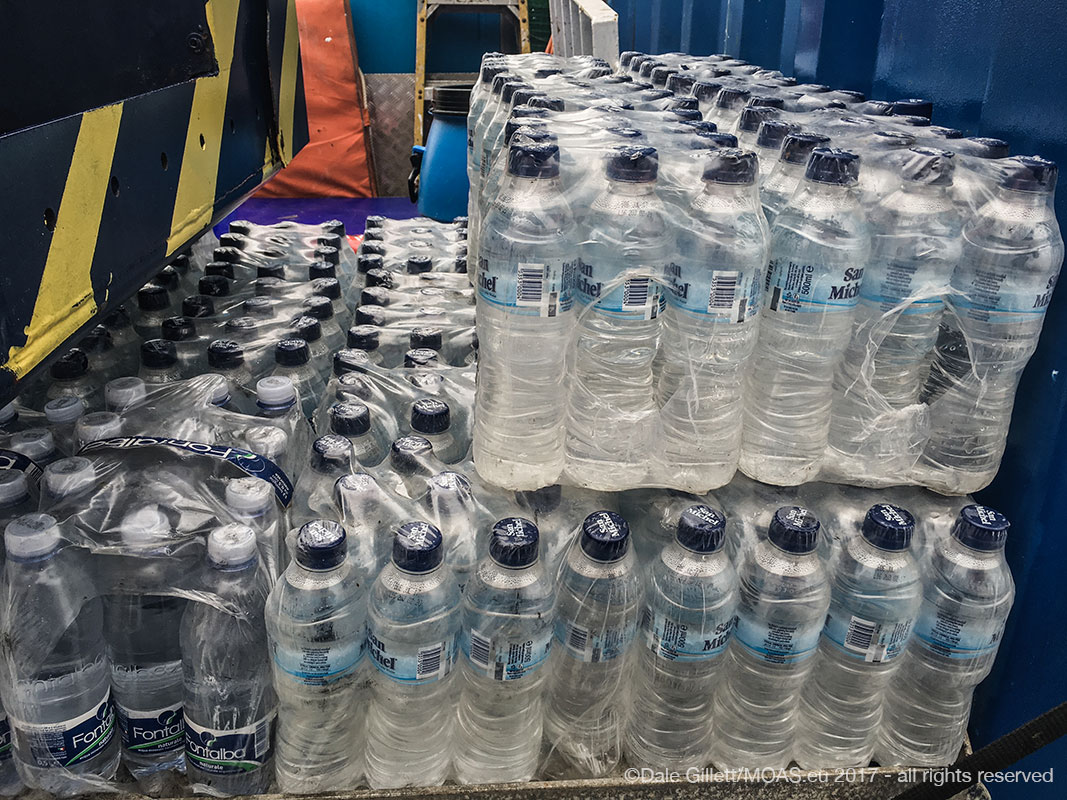 When we first welcome our beneficiaries on board, they are provided with a bottle of water, which they can then refill from on-board water dispensers as they need. Many people are suffering from dehydration when MOAS first reaches them

For the first time, we are now stocked with hot halal meals. This means that during the transfer north our beneficiaries will receive at least one hot meal, which will be important in helping keep their spirits high and restoring a sense of normality following their ordeal

The final preparations for the clinic were also being made, as our new post-rescue care medical team familiarized themselves with the layout of the clinic and ensured that as many medical scenarios as possible had been accounted for.

This year, we have worked on expanding our SAR capabilities yet further to make our rescue operations as effective as possible. Our crew have installed powerful new binoculars that have both day and night capabilities in a new ‘monkey island’ watchtower, which will help us to spot and locate vessels in distress as quickly as possible.

As well as the new pieces of equipment on board, the crew have been preparing and maintaining the specialist equipment we have always used during our rescue missions. 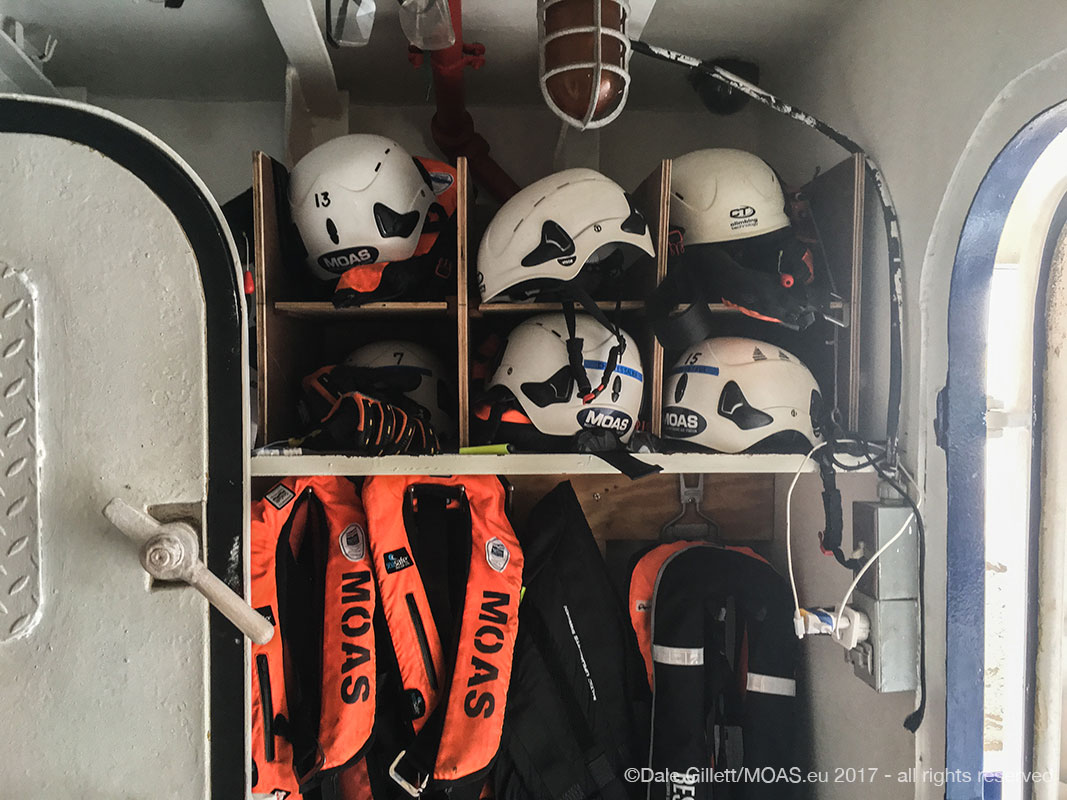 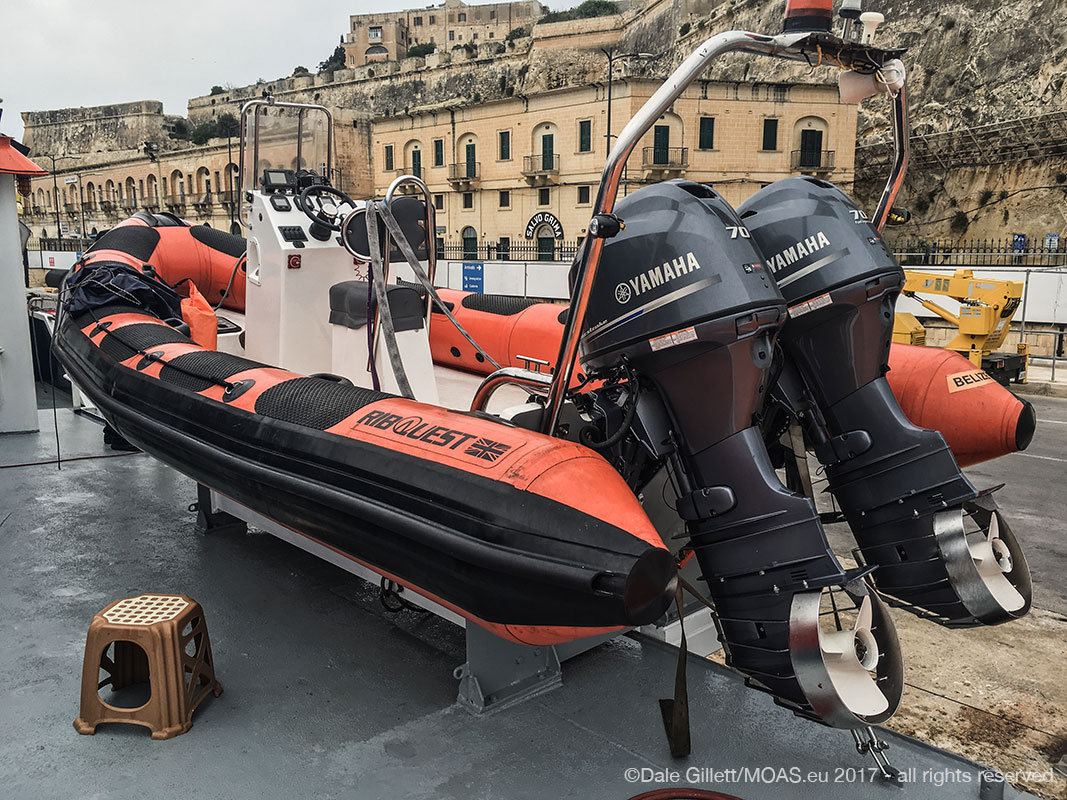 One of the two RHIBs on board the Phoenix. During a rescue, the RHIBS are deployed first to assess the situation in the vessel, before lifejackets are handed out and the transfer of people to the Phoenix begins 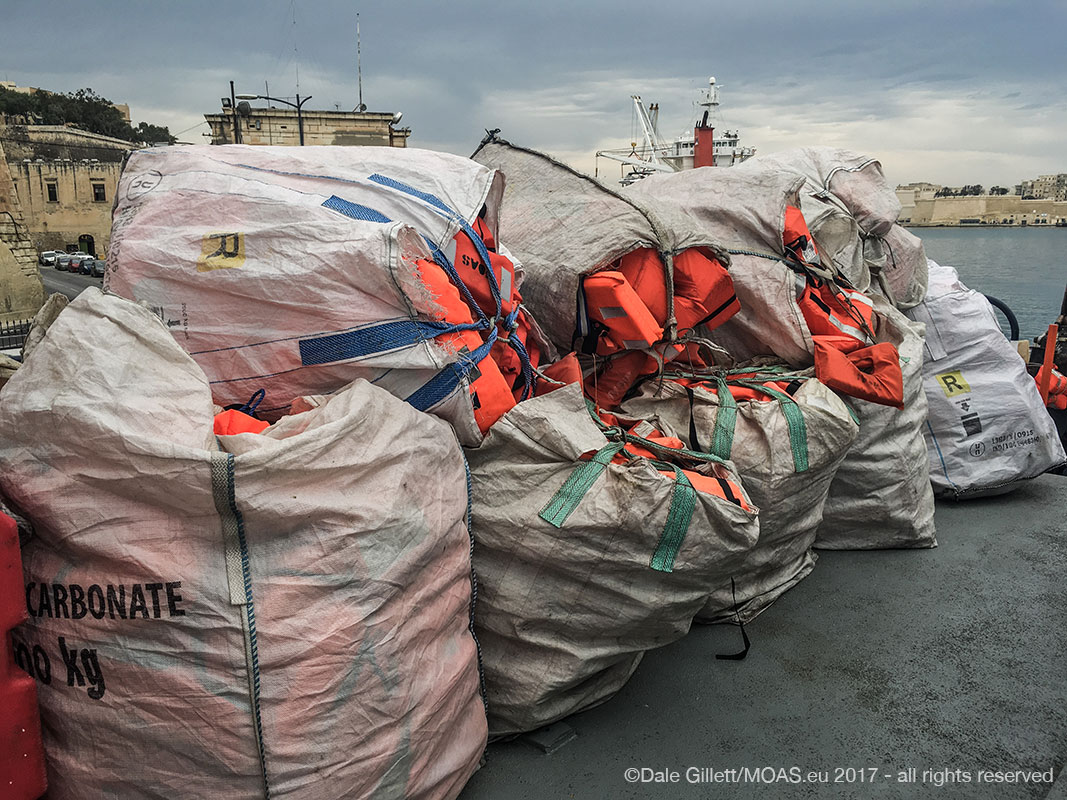 Lifejackets stored and ready to be handed out during rescues 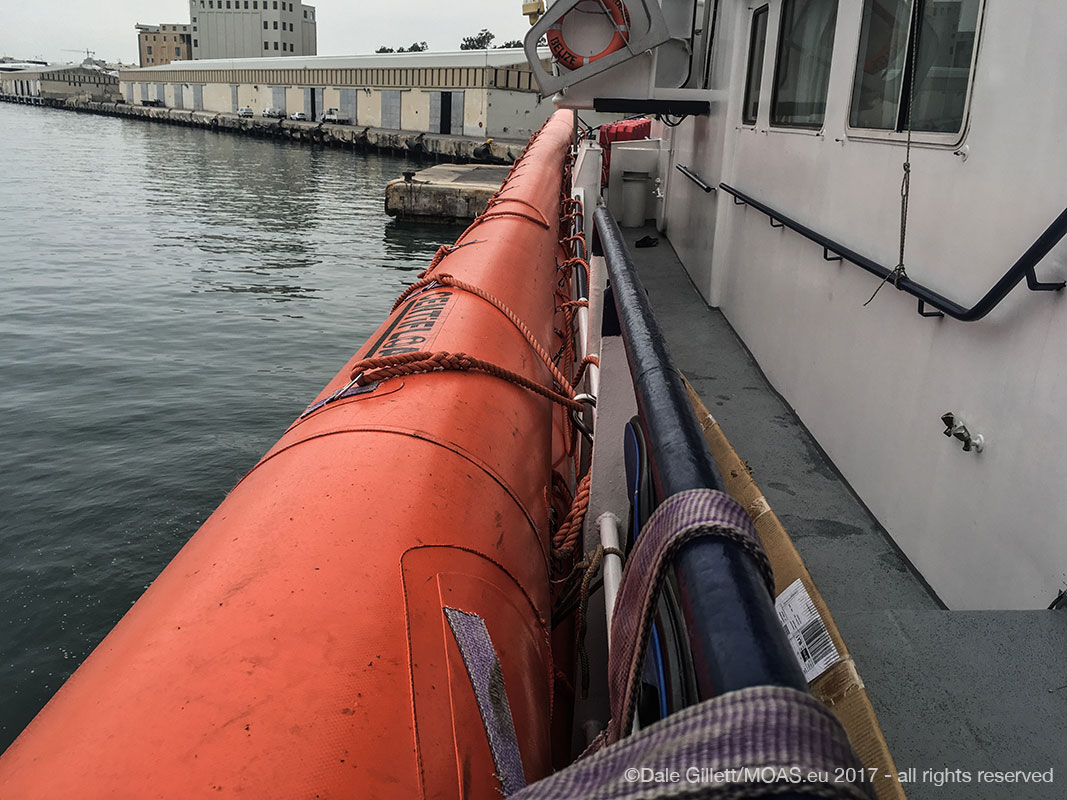 The centifloat (a large floating rescue device) mounted on the side of the Phoenix. If there are people already in the water when rescues begin, the crew deploys the centifloat, allowing people to hang on in the seconds or minutes before the crew can reach them

During our previous missions, MOAS has pioneered the use of humanitarian drones to dramatically increase our search capabilities. This mission, we will be supported by a manned aerial asset in the form of a fixed-wing plane that will enhance even further our ability to identify vessels in distress and share information of unfolding emergencies at sea. A room on board the Phoenix that had previously served as the drone control room has been refitted for a member of the plane communications crew, who will work alongside the Phoenix crew to make our rescues as effective as they can be.

Once all the final preparations and goodbyes had been made, the Phoenix began its departure from Malta, arriving in the SAR zone 18 hours later.

While the MOAS crew and team are deeply sad and frustrated  that the humanitarian crisis in the Mediterranean is continuing for yet another year, we are glad that thanks to the support of so many people around the world we are now back at sea, where we are needed the most. 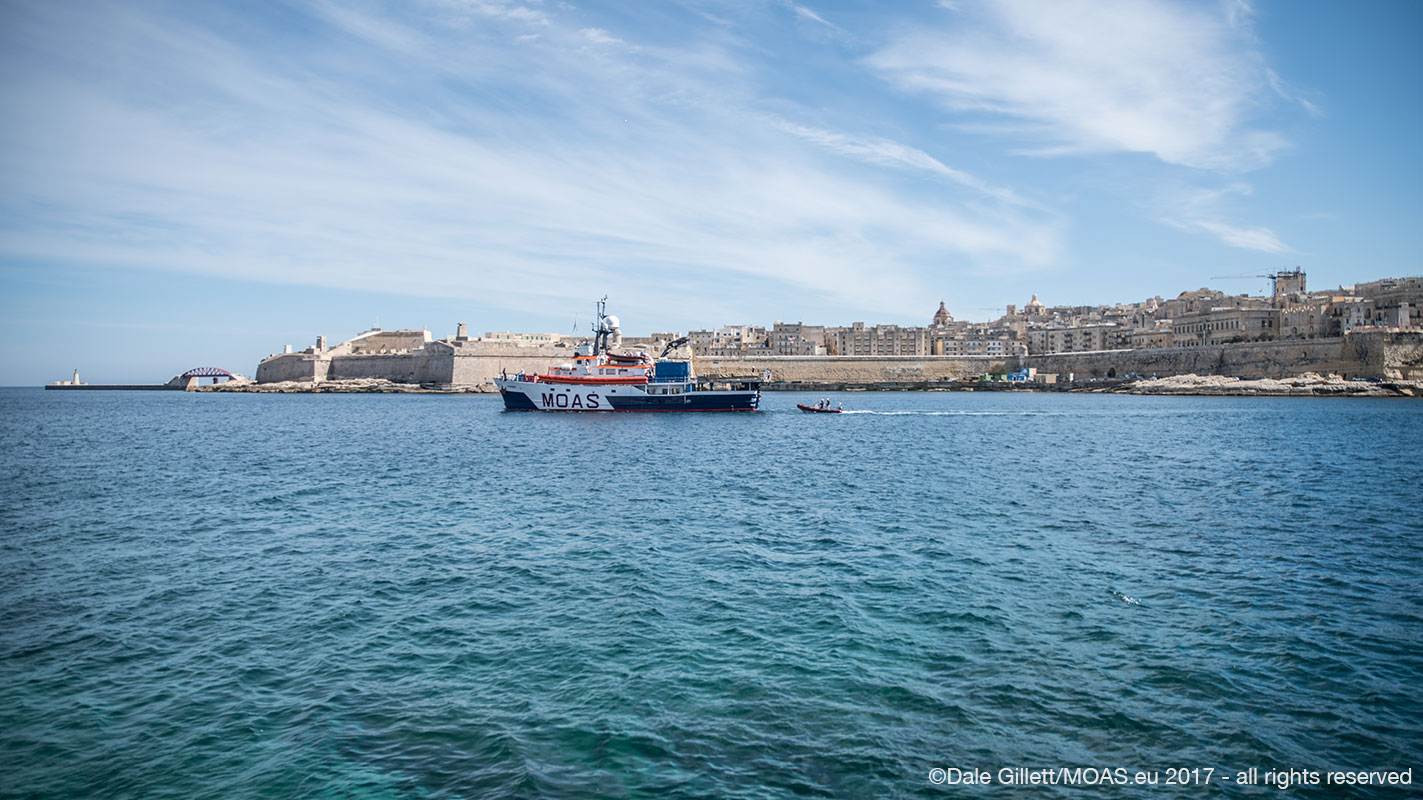 We explore the ways we have been preparing for sea in more depth in our latest podcast, in which you can hear the crew describe preparing for the new mission. Make sure to also watch out for our new video blog series, ‘Preparing for Sea’.

Sign up to our newsletter to follow the operational updates of our 2017 mission, and give whatever you can to support our rescue missions.