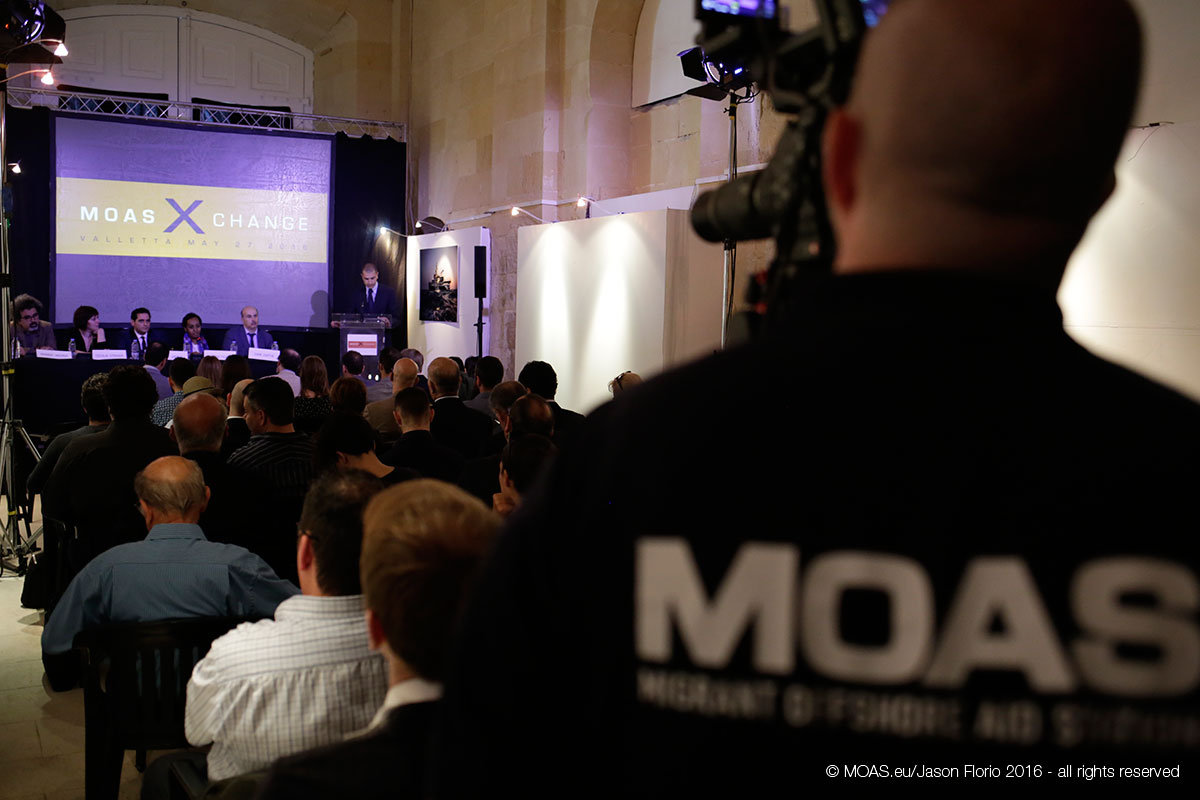 “Communication and cooperation is vital in addressing such an emerging crisis”

Topics ranged from deaths at sea and the hardships faced by migrants and refugees in Turkey, Egypt and Libya to the emergency of kidnappings in Libya and Egypt as well as the fluctuating public opinion response to the plight of refugee. The modus operandi of people smugglers and the lack of a humane and coherent EU response to the migration phenomenon were also discussed.

The debate occurred less than 24 hours after two boats carrying migrants capsized within 48 hours, resulting in casualties. In March of 2016 there was a 300% increase in crossings in the central Mediterranean as compared to the same month last year. Over 191,134 migrants and refugees have arrived by sea from Turkey and Libya with over 1,370 dead and missing, many of them in Libyan waters.

Commenting after the event, MOAS Founder Christopher Catrambone said: “Communication and cooperation is vital in addressing such an emerging crisis. We are proud to have organised this meeting of minds today which illustrated the scale of the problem and offered some paths for its better management.

The full debate was live streamed and the resulting video can be viewed online by following the link on the MOAS website, where other details can also be found.

Moderated by Mark Micallef, the executive director of Migrant Report, the panel included Sami Zaptia, managing editor of the Libyan Herald, Cecilia Strada, president of the NGO Emergency, Alganesc Fessaha, founder and president of the Gandhi Charity, Nando Sigona, senior lecturer and deputy director of the Institute of Research into Superdiversity at the University of Birmingham University, and the award winning composer, pianist, founder & CEO of Pianos for Peace, Malek Jandali.

Among the guests and attendees were the President of Malta Marie Louise Coleiro Preca, while the Maltese Prime Minister Joseph Muscat and Opposition Leader Simon Busuttil visited the MOAS rescue ships, the MY Phoenix and the Responder. The event included a tour of both the MY Phoenix and Responder vessels, which are together in Malta for the first time, as well as a performance by Malek Jandali.

The Migrant Offshore Aid Station is a professional team supported by a global network of supporters working along the world’s deadliest sea crossings because we collectively believe that no one deserves to die at sea. So far MOAS has assisted over 13,500 migrants in distress, responding quickly to where the needs are greatest. In 2015, three-quarters of all migrant deaths worldwide occurred in the Mediterranean. It is our professional crew coupled with our global network of supporters who ensure that our rescuers can continue to provide life-saving services. It is an honour to be able to continue to serve those who risk death to save themselves and their families from war, persecution and hardship.