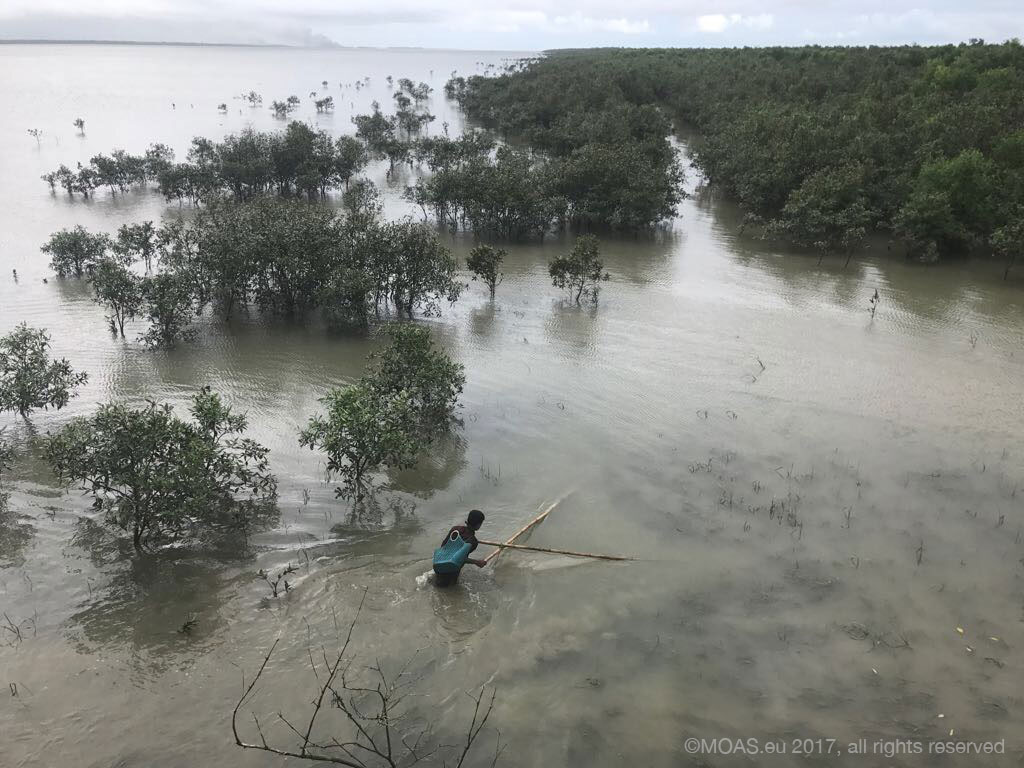 With the fast-evolving impacts of climate change, Bangladesh has been frequently facing extreme climatic events, such as erratic rainfall, flooding, drought, sea-level rise, cyclones, and salt-water intrusion. The country often feels the deep impacts of climate change because of several concurring factors: flat and low-lying topography; its disadvantageous geographic location; high population density; and a reliance of many livelihoods on climate sensitive sectors, particularly agriculture and fisheries. Most of Bangladesh is less than 10 metres above sea level, with almost 10 per cent of the country below 1 metre, making it extremely vulnerable to increasing high tide

Therefore, the impacts of climate change are likely to cause:

These impacts could be extremely detrimental to the environment, national development, and the people of Bangladesh. According to the ‘Global Report on Internal Displacement 2021’, published in May by the Internal Displacement Monitoring Centre (IDMC), approximately 4.4 million people became internally displaced in Bangladesh last year largely due to natural disasters including cyclones and monsoon floods. Furthermore, it has been estimated that by 2050, one in every seven people in Bangladesh will be displaced by climate change.

Economically, flooding has a huge effect on farmers livelihoods – often destroying crops, which has a knock-on effect on production supplies and the ability of the country to feed itself. Bangladesh relies heavily on the support of NGOs and UN agencies to help it deal with the risks, the country is working to build infrastructure for climate change mitigation and managing these risks long-term.

Moreover, the impact of climate change and flooding results in increased cases of fatal drowning incidents. Drowning is indeed a major public health issue in Bangladesh, being the leading cause of death among children aged 1 to 17. According to the latest report released by MOAS, this threat extends to the young Rohingya children living in the refugee camps in Cox’s Bazar.

To mitigate and respond to the risks caused by climate change and environmental hazards, the government of Bangladesh put in place The National Plan for Disaster Management (NPDM) 2021-25 , which is based on the four key principles of Disaster Risk Management, adopted from Sendai Framework for Disaster Risk Reduction (SFDRR) and Standing Order on Disaster (SOD) as follows:

Essentially, it’s a systematic approach to identifying, assessing and reducing the risks of a disaster. The causation may be man-made, natural, weather-related or an amalgamation of factors, but this approach is trying to reduce the socio-economic and structural vulnerabilityy of communities to disasters.

Since 2019, MOAS is providing our expertise to improve disaster risk reduction in Cox’s Bazar region. According to Paul, one of the MOAS technical experts in Bangladesh: “The MOAS approach to DRR is quite unique because it’s been recognised that there are a lot of actors involved in attempting to reduce the risk but there are very few involved in trying to deal with the residual risk once that has been reduced and actually to build community resilience. After a disaster there will be a period time before organised help arrives, and we’ve seen that globally in natural disasters and man-made disasters that there is always a period of time between the impact of the event and the arrival of organised first responders and during that time the only responders are a combination of bystanders or members of the community. So we’ve been working very hard with UN agencies and the CPP volunteers that are based in the camp and in the host-community to try – upskilling them so they are better equipped and better prepared to deal with the after effects of a disaster, and ultimately reduce what we call the ‘disaster gap’, reducing the time between organised help arriving and the actual disaster taking place.”

In response to high numbers of water-related incidents during the monsoon and cyclone season in Cox’s Bazar, MOAS has been providing its expertise and technical advice for the delivery of Flood and Water Safety Training courses, since 2019. The courses train Rohingya and host community volunteers to act as first responders in the event of a water-related emergency. Participants are also taught methods to manage the after-effects of flooding and save lives, as well as how to operate safely within flood environments and perform rescues using ‘throw bags’ to pull people in distress from the water. Selected volunteers are also chosen for ‘trainer training’ and receive additional instruction allowing them to deliver the course to further groups of volunteers in their areas, ensuring that skill development and retention continues within the community. In addition, integrating trainers from the Rohingya community also ensures cultural and linguistic understanding within the wider outreach project. Since the scheme was established in 2019, over 3000 safety volunteers have been trained, and lifesaving results have been achieved: in July a boy was saved by one the volunteers trained by MOAS. In addition to this MOAS is also beginning the design of some fire safety and response projects in the region as part of a wider disaster risk reduction strategy. We will discuss this in our next podcast, celebrating DDR Day on 13th October.

Since 2017 MOAS is operating in Bangladesh, bringing aid and assistance to the Rohingya refugees. We are keen to expand our projects for the disaster risk reduction in the camps and the host community. We’re also willing to expand the network of first responders, community level first responders and provide them with the knowledge and the equipment to affect rescue safely. If we have enough people, then there will hopefully always be someone around when they’re needed to save lives.