Rescue Focus: One Night in October

Each operation MOAS undertakes is different, whether it is a rescue, in which we bring people on board directly from unseaworthy vessels or from the sea, or a transfer, where we work with other search and rescue assets to move people to safety.

In this blog we focus on one operation in early October, in a week that saw over 10,000 people rescued while attempting to cross the Mediterranean. Each of those 10,000 people had their own reasons to brave the deadly crossing. Here, we bring together the stories of people assisted by the Responder crew and the Red Cross on the night of October 5th, 2016.

the MOAS crew knew that the arrival of calm conditions would prompt many attempted crossings. On arriving at the area of operations on the evening of the 5th, the Responder was asked by the International Maritime Rescue Coordination Centre in Rome to take on board people who had recently been rescued by other ships in the area, but did not have the capacity to care for them.

In the pitch darkness, 379 migrants were brought aboard the Responder over the course of three hours. As the MOAS team pulled people over the gulf from one boat to the other, the Red Cross team cared for those who were exhausted, dehydrated, and had suffered recent beatings. The people came from Bangladesh, Mali, Togo, Senegal, Nigeria, Syria, Sierra Leone, Gambia, Benin, and Morocco. As the MOAS and Red Cross teams moved among the people on deck, people began to share their stories.

When Juliette was pulled onto the Responder, tears fell down her face. As people tried to comfort her, they slowly realised that she was crying tears of joy. “I couldn’t imagine that I would make it,” she said of the crossing. “When I stepped on this ship, I was overwhelmed.” 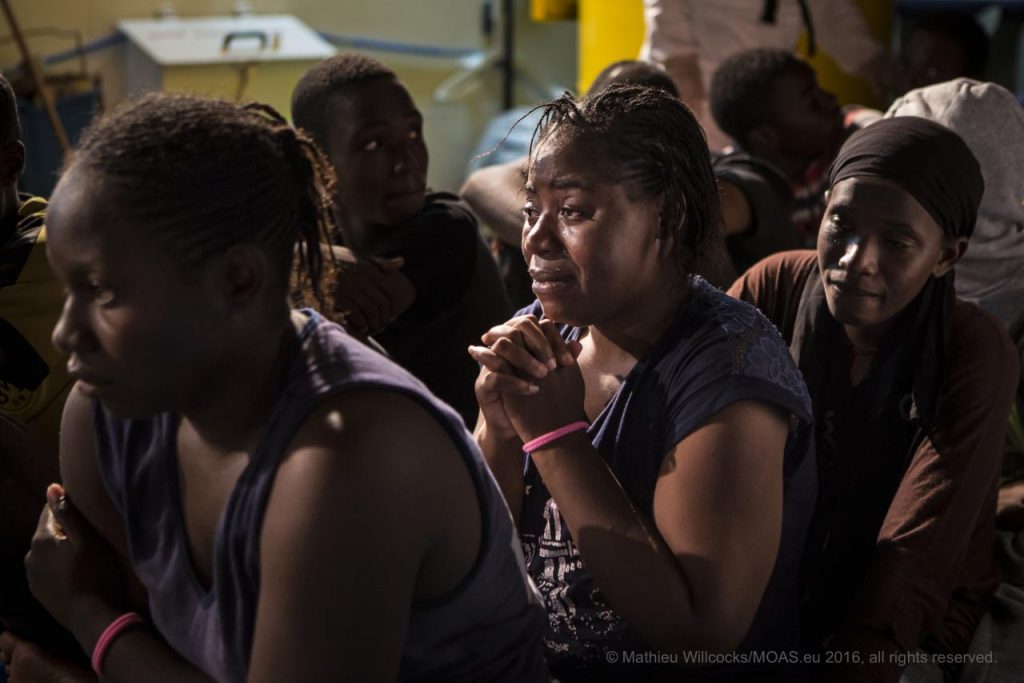 Juliette is from Benin, but had spent the past 5 months in Libya, where she and other women were kidnapped, beaten, and repeatedly raped. Friends helped her to escape and board a rubber dinghy, which she assumed would reach land in a matter of hours. Two nights later, the dinghy was still at sea with no prospect of ever reaching shore. Its passengers had fallen into silence as they came to terms with their bleak situation.

Eventually, they were rescued and transferred onto the Responder. “I can’t believe I made it,” Juliette said. She has twin 3-year-old girls in Benin and she hasn’t been able to speak to them since her kidnapping. Once she reaches land, she hopes to track them down with help from the Red Cross’s Restoring Family Links services. 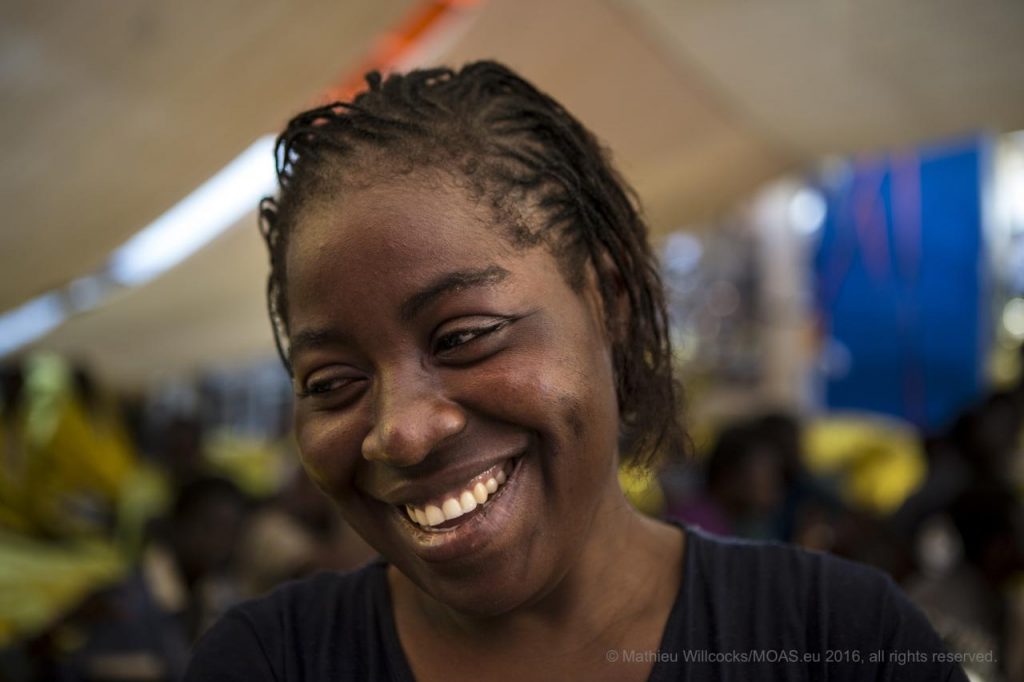 Among the men and women pulled to safety were three unaccompanied children, travelling without their parents. The boys—two from Nigeria and one from Senegal—were rescued from a floundering rubber dinghy. One of the boys, who did not know how to swim, had to be pulled from the water. 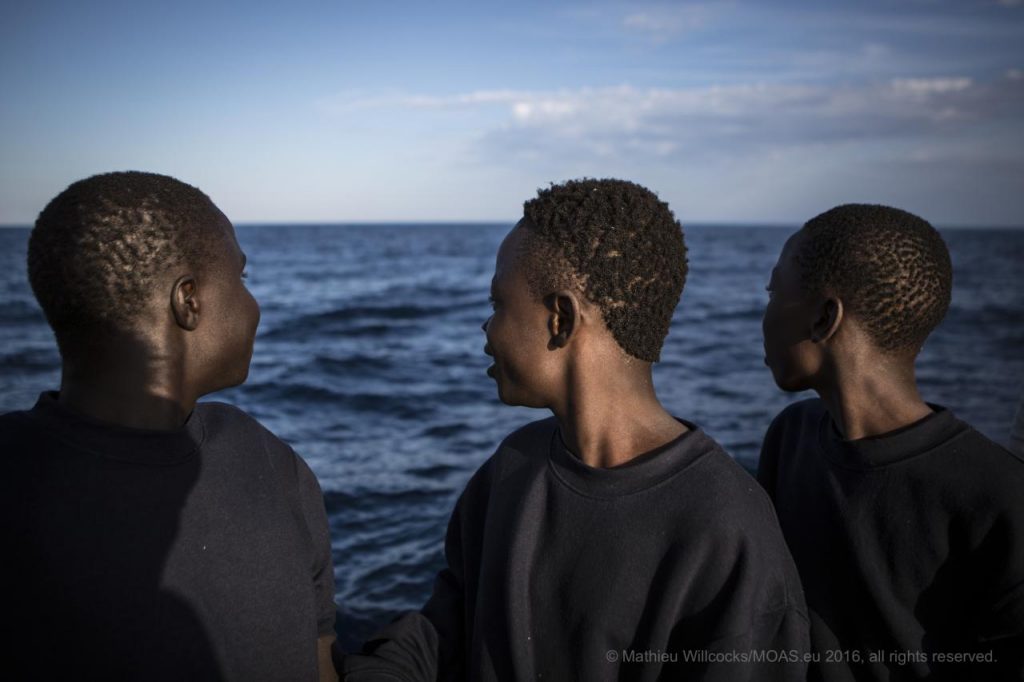 The boys were transferred at midnight onto the Responder for safe passage to Italy. Their clothes were soaked and stomachs empty. Once onboard, the Red Cross team gave them health checks, warm clothes, food, water, and blankets. The first thing one boy asked for was a toothbrush, and was thrilled when he was provided one. All three dream of being educated in Italy.

For the three days he was on the Responder, Joseph wasn’t called by his first name. Instead, everyone called him “The Rock.” After a harrowing trip from Nigeria to Libya, he was kidnapped and beaten by his captors. Desperate to escape his situation, he boarded a rubber dinghy on the Libyan coast with more than 100 other people. 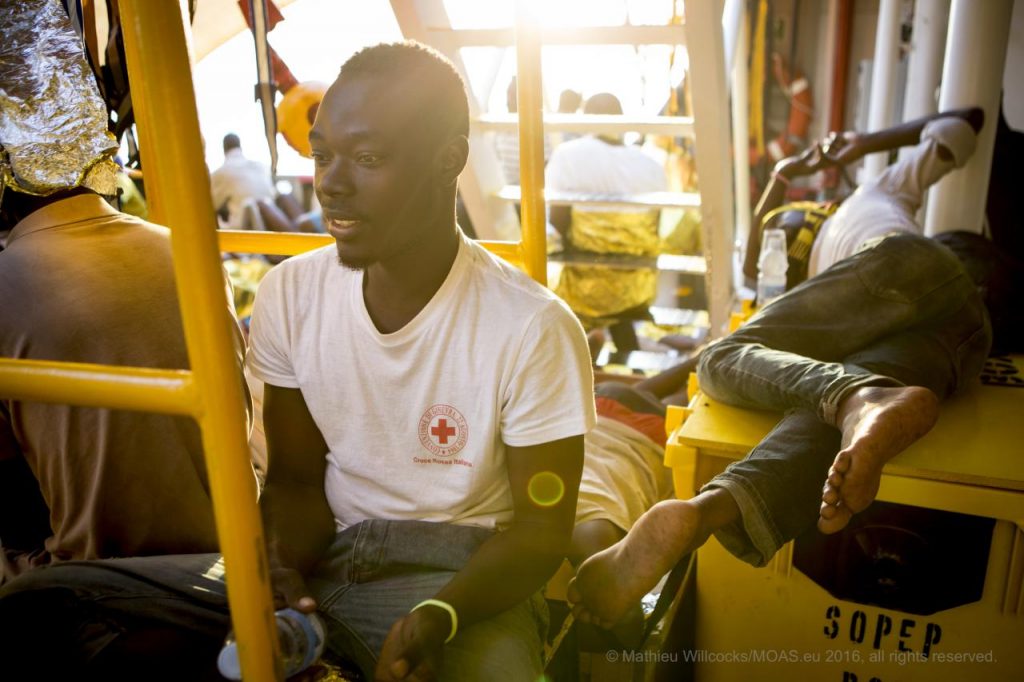 They were eventually rescued by a ship and transferred to the Responder. “We were smiling with great joy,” he said. “People call me the brain behind us getting rescued, but we were a raft with different tribes, different languages, and ideas. All hope was lost, but we made it.”

It took three days for the Responder to reach Messina, Italy, where the IMRCC had instructed the crew to complete disembarkation. Although we can only hope that the people we assisted will find safe and happy lives, that there is still hope for the future at all is the most important thing.

While our operations themselves can be very complicated, in many ways our mission is ultimately simple- the humanitarian act of saving lives, of reaching out a hand to those that are drowning. It is the people and the stories like those above – the people who remain full of hope despite everything; young people facing the unknown alone; mothers separated from their children- that make our imperative to act so clear. In the 48-hour period during which this operation took place, at least 28 people were reported to have died in the Mediterranean. It could so easily have been Juliette, or Joseph, or one of the boys.  Not one of those people deserved to die at sea.

For all the MOAS news and updates sign up to our newsletter at the bottom of this page, or support our rescue missions by giving whatever you can to help us save lives at sea.