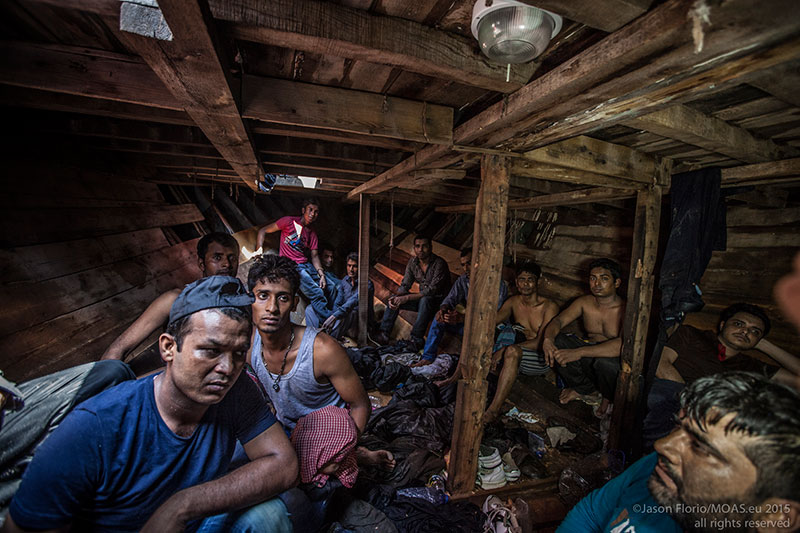 One hundred people a day rescued at sea by MOAS

Search and rescue charity Migrant Offshore Aid Station (MOAS) assisted in the rescue of almost 700 people since its vessel M.Y. Phoenix set sail on May 2nd.MOAS has partnered with Médecins Sans Frontières / Doctors Without Borders (MSF) which provides support to the MOAS mission and post-rescue medical care. The two NGOs combine to create the only private search and rescue service in the Mediterranean.

It is feared that 2015 will be the deadliest year yet for those risking the Mediterranean crossing. So far this year an estimated 1,750 have drowned compared to 96 deaths during the same period last year.

Since May 2nd, MOAS rescued three boats containing people fleeing from Africa and the Middle East and was asked to carry out the disembarkation of a fourth group of people rescued by another vessel.

MOAS is this year conducting rescues in the Mediterranean Sea for six months during the peak of the crisis. MOAS assisted 3,000 migrants last year when it was at sea for 60 days between August and October 2014.

“This year MOAS is seeing twice as many people rescued as last year,” said Christopher Catrambone, the co-founder of MOAS along with his wife Regina.

“The most shocking part of this ongoing tragedy is the sheer number of children, including unaccompanied children, making this dangerous crossing. It’s harrowing to imagine what these children have witnessed since leaving their homes, sometimes all the way from Syria.”

“We are very proud to be adding our professional crew and resources to the other rescue assets in the Mediterranean, most of which are commercial vessels having to face the brunt of the soaring numbers of boats in distress. Everyone is working around the clock and while commending them for their dedication we must stress that in order to save lives effectively the EU needs a dedicated search and rescue operation,” he added.

The latest rescue by MOAS saved 118 people from Syria, Somalia and sub-Saharan Africa: 80 men, 13 women and 25 minors, including nine children under five.

The operation was conducted in Force 5 swells and took almost two hours to complete.

It began when Maritime Rescue Coordination Centre Rome directed MOAS to search for a small wooden boat in distress. The Phoenix immediately dispatched a Schiebel Camcopter® S-100 to search the area and managed to quickly locate the boat, discovered by the Schiebel operators to be 14 miles from its estimated position. This rapid pin-point accuracy allowed the crew of M.Y. Phoenix to prepare for the rescue and medical issues.

The migrants had been sent out to sea at 3am from the coast of Libya and were scared but generally in good shape.

The Italian Coast Guard, through MRCC Rome, then requested that MOAS in partnership with MSF take on board an additional 101 persons, and disembark all the migrants in Sicily.

These rescues took place just hours after M.Y. Phoenix finished disembarking another 473 people in Pozzallo, Italy. The migrants were rescued on two separate boats within 24 hours of M.Y. Phoenix’s departure on May 2nd.

The 20 person team aboard the M.Y. Phoenix includes a professional crew of camcopter operators, search and rescue professionals, medics and mariners.

MOAS’s innovative use of two high-speed Schiebel Camcopter® S-100 drones aboard M.Y. Phoenix has already yielded excellent results. They have had nine hours of flight time in the past week and assisted during night-time rescues, ensuring that nobody is left behind.

“MOAS is providing state-of-the-art search and rescue but we are also providing post-rescue care through our partnership with MSF. In addition, we are coordinating our efforts with other vessels effectively to save lives,” said Director Brig. Ret. Martin Xuereb.

“This year we are grateful for the support of MSF, Schiebel and OGI, among others and we look to donors to extend our mission year round,” he added.

Those brought on board by the MOAS rescue crews were given an initial triage by the MSF medical team who treated conditions including diabetes, dehydration, conditions related to pregnancy, skin infections and injuries sustained during beatings and violent attacks. All those rescued receive food, water and other essential items onboard the M.Y. Phoenix.

Photos from the rescues can be downloaded here

VIDEO from a night-time rescue can be viewed here: https://www.youtube.com/watch?v=wZutJ-H4Nqo