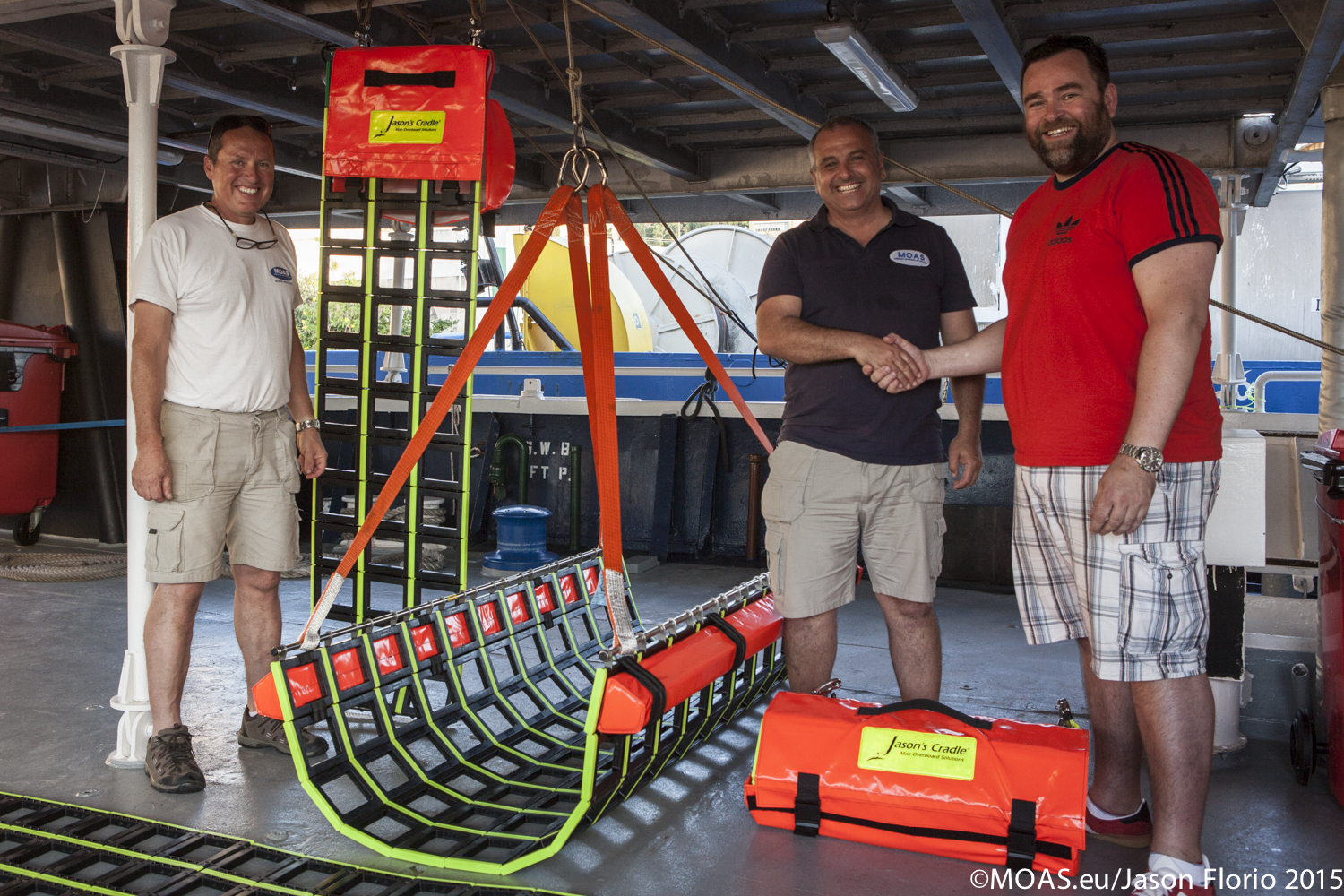 The Centifloat is a long inflatable tube with ropes to which more than one hundred people can latch onto while waiting to be rescued from the water. It can be easily towed by RHIBs at high speed.
The cradles, which are scramble nets made out of strong plastic, are designed to retrieve people quickly and horizontally from the water, reducing the chances of “dry drowning”, or Circum Rescue Collapse. Jason’s Cradle® is one of the safest and quickest methods for retrieval. The systems are fully approved by SOLAS, the International Convention for the Safety of Life at Sea. MOAS was given a standard cradle, a stretcher, and two FRC (fast rescue craft) kits.

“We are operating in a very unpredictable environment where the chances of something going wrong are very high. This equipment enhances our capacity to save lives. It is particularly useful to prevent drowning in cases where overcrowded boats are at risk of capsizing. We’re very grateful to Unique Seaflex and Jason’s Cradle® for their generosity at a time when the migrant crisis is expected to peak,” said MOAS director Martin Xuereb.

Garth Matthews, Managing Director of Jason’s Cradle, said: “We strongly believe in MOAS’s admirable and inspiring mission to save lives at sea. When we heard about what they were doing, we wanted to do our bit, so we donated our products which are also designed to save lives in dangerous sea conditions. We sincerely hope that the crew will find Jason’s Cradle useful in their mission. We look forward to offering our continued support to MOAS along the way.”

Graham Brading, Managing Director of Unique Seaflex, said: “We developed the Centifloat after having seen the terrible images of migrants drowning in the Mediterranean when attempting to board a merchant vessel. We saw helpless crew throwing ropes and life rings overboard as hundreds of migrants struggled for breath after finding themselves in the water clearly unable to swim. We wanted to design a buoyancy aid which was quick to deploy, catered for over 100 people, and needed no special skill set to operate. When we learnt about the great work MOAS was doing, we wanted to make sure they too could make use of this device to save lives.”

MOAS operates from the 40-metre vessel M.Y. Phoenix in partnership with Doctors Without Borders (MSF). The vessel is equipped with two fast rescue RHIBs, two Schiebel S-100 Camcopters (drones) and a fully-stocked clinic on board.

Since beginning its operation in August 2014, MOAS has already assisted almost 7,000 people from packed and unseaworthy migrant craft trying to cross the Mediterranean to reach Europe.