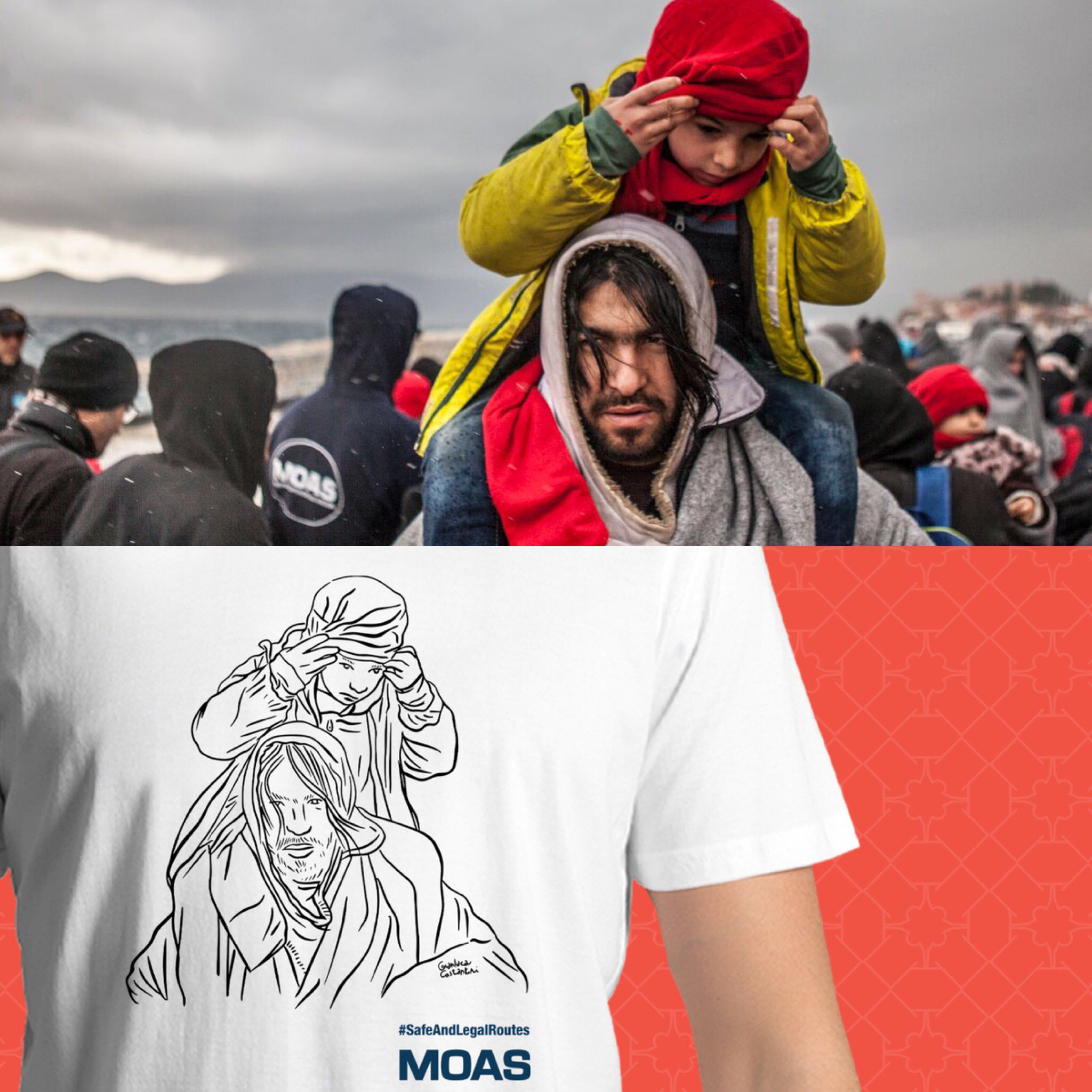 MOAS AND ART AS FUNDRAISING

MOAS is largely a privately funded organization, relying on donations from the public and our amazing community of supporter to keep our operations afloat. This has meant that people have fundraised for MOAS in amazing ways- from marathons to bake sales, jewelry auctions to concerts, but one method of fundraising for MOAS has been more popular, and more successful, than any other- the use of various forms of visual arts.

MOAS has been lucky enough to work with both hobbyists and internationally renowned artists alike and we’re always blown away by the dedication, passion and consideration that goes into the concepts, creation and curation of a piece. From graffiti to sculpture, public installations to fine art we have had all manner of materials and medium put to use for the cause.

With an exciting new art project soon to be announced, we wanted to take a look back on just some of the artists who have partnered with us over the years, using their talents to advocate for their communities.

Fundraising has been done for MOAS through auctions, donation facilitation, art sales and much more.

One of the first artists to engage with us on a major project was Alfredo Jaar, who in 2016 created ‘The Gift’ as a response to the ongoing refugee crisis. The project took the form of simple blue boxes with an instruction to open, which unfolded on a statement on the humanitarian crisis in the Mediterranean. There were further instructions to fully dissemble the box, which opened to reveal an image of a beach on which Alan Kurdi’s body was found. On one side of the box was MOAS’ donation information, which could be popped out and kept, meaning the box could then be reassembled as a collection box for MOAS. The project took place at Art Basel, an international art fair in Switzerland, and over the course of the fair 12,000 boxes were distributed throughout the city.

Sales of the illustration book Atlantis, contributed to by over 26 international artists and writers, was created in 2016, went toward our maritime search and rescue mission. All artists used the theme of journeys and migration as their inspiration and advocated for migration issues on their platforms throughout the campaign. The book was bought by art lovers and MOAS supporters across the globe and raised both valuable funds and essential awareness for the cause. 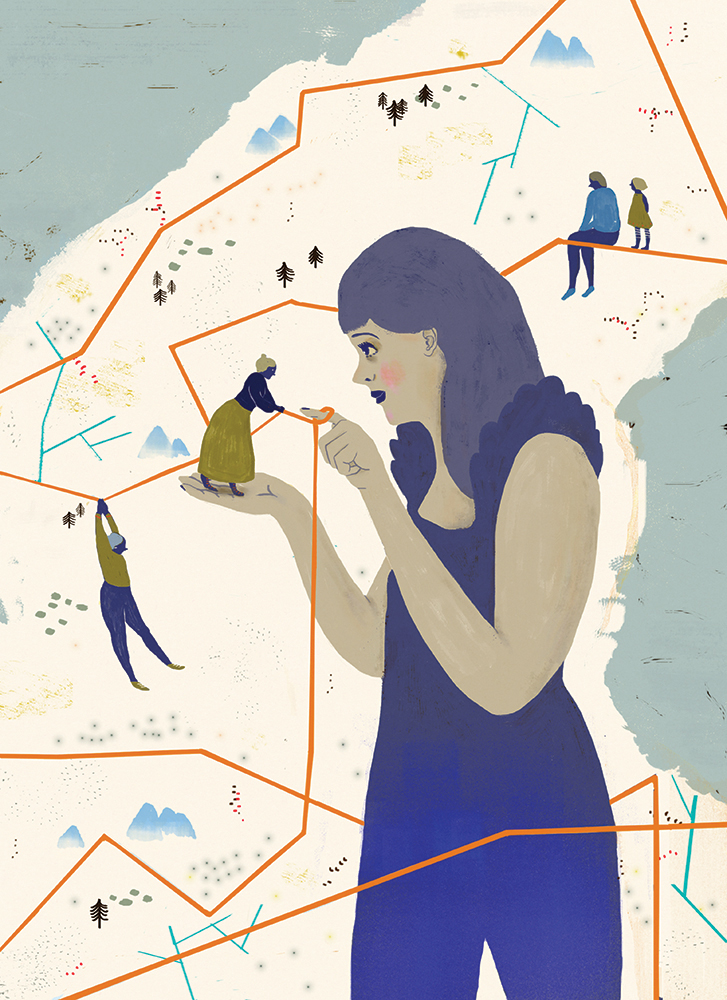 Artist and activist Gianluca Costantini is behind the beautiful illustrations that appear on MOAS’ merchandise. Each of the designs are based on an original image by a MOAS photographer in the field of operations and have been used to inspire these powerful and inspiring images. Gianluca’s images have since been used to make MOAS merchandise from t-shirts to tote bags, notebooks to hoodies and continue to strike a chord with those connected to MOAS.

These are just a couple of examples of artists who have contributed their skills and talents to raise funds for MOAS missions. 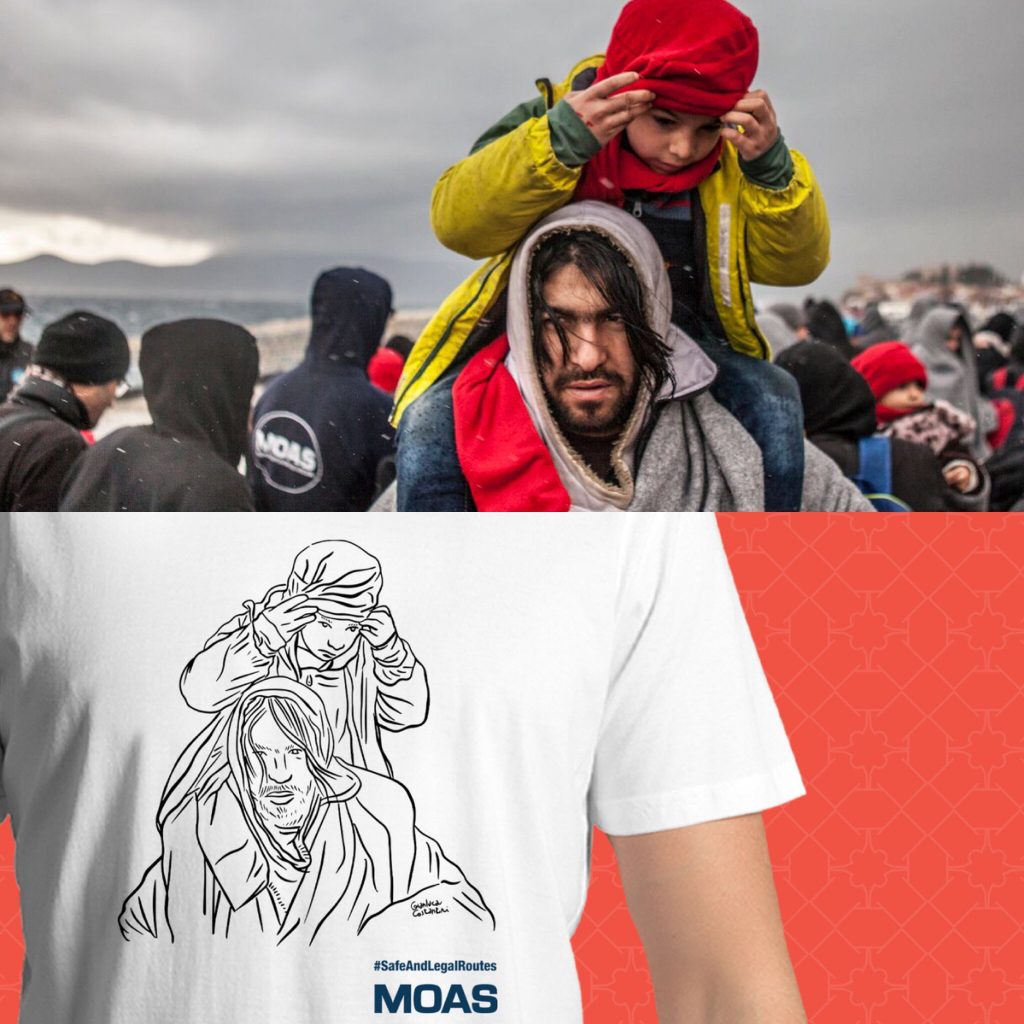 Beyond art shown in more traditional spaces, MOAS has also been supported by artists who use their work as a form of protest. Recently, MOAS has been supported by GOIN, a French street artist who uses the urban landscape as a backdrop for his political commentary. He has recently completed a piece called ‘Lady Refugee’ in Grenoble, France, in which he combines religious imagery with symbols of the crisis in the Mediterranean; a female refugee wearing a life jacket and a crown of barbed wire releases a dove of peace from her hands.

The piece’s position in such a public space acts to bring the humanitarian crisis in the Mediterranean to the streets and daily lives of the people of Grenoble, implying that this crisis is something that everyone should know – and care- about, using powerful imagery to protest against indifference.

Beyond the visual impact of the work itself in situ, GOIN has also donated half the proceeds of prints of the piece to MOAS (which can be purchased here). This means that once again, an artist has found a way to translate the message inherent in their artwork into action through direct contributions to our mission. 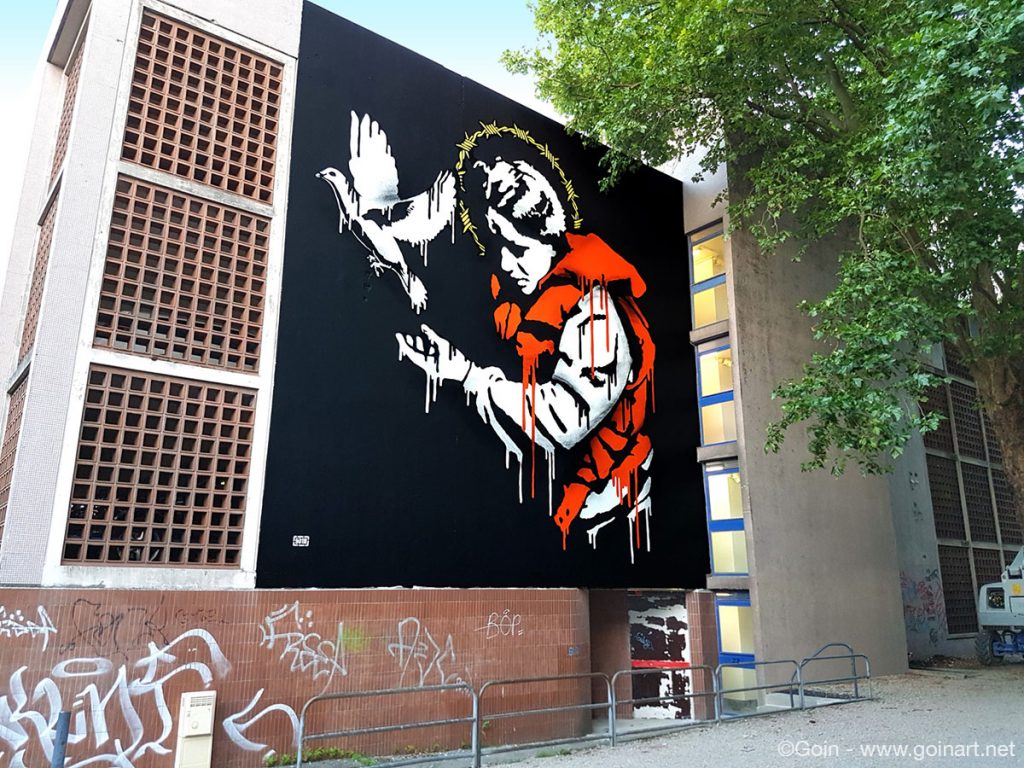 No matter what kind of medium, interpretation or motivation, art has always been a powerful tool for advocates and humanitarians alike. Giving a unique insight into communities in crisis, communicating complex issues to a wider audience and motivating empathy and passion in the general public, art and MOAS have always gone hand in hand.

We are very excited to be working on a brand new art initiative, which we will announce in coming weeks, one which will give a deep look at the artists process and culminate in an explosive campaign designed especially for us.

Keep following on social media, sign up to our newsletter and keep reading our blogs to find out more! If you want to directly support MOAS and its programming please donate what you can now on www.moas.eu/donate