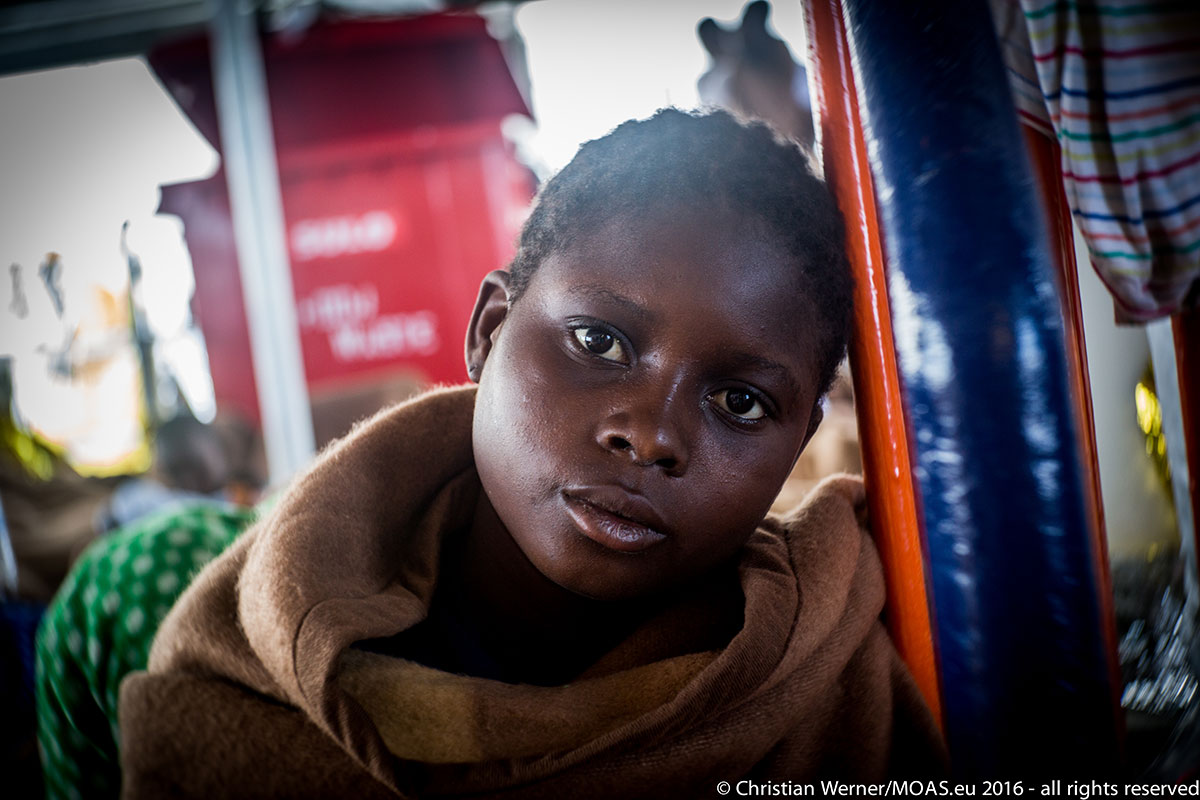 Faith, 20, fled Nigeria when Boko Haram kidnapped her father. She headed north to Libya, and crossed the desert with a group of 26 people, 6 of whom died from thirst on the journey. She was rescued in the Central Mediterranean by the MOAS crews in August 2016.

The role that MOAS plays as a SAR organisation is only a small part of the long journeys the people we rescue undertake as they look for a better, safer life. Often these journeys include an incredibly dangerous desert crossing. In this blog, we look at why people are forced to cross the desert and what the journey entails, before Daniel, a young Eritrean man MOAS rescued in June 2016, shares his experiences of the desert crossing.

Throughout history, people have moved across the Sahara desert from both the east and west of Africa. They have migrated for many reasons: for trans-Saharan trade, to make pilgrimages, and for education. Following these centuries of movement,  migration across the desert increased substantially in the 1990s, as Libya’s ‘Pan-African’ immigration policies – in which Sub-Saharan Africans were welcomed to work in Libya in the spirit of pan-African solidarity – as well as civil wars in West Africa, the Horn of Africa, and the Democratic Republic of Congo, led more people to head north.

Today, the existence of oppressive regimes, civil wars, failing states and endemic poverty have increasingly caused people to leave sub-Saharan countries and move northwards across the desert towards North Africa, to Libya in particular (IOM). The routes are largely controlled by smugglers and local go-betweens, who are reported to subject those wishing to travel to violence and extortion along the way.

Once the [desert] journey begins, migrants enter a world where they lose their freedom and safety, they are normally strictly controlled, have no more decisional power or rights, and are often brutalised.

The journey across the desert itself is extremely difficult. UNICEF has found that refugees have reported being packed on pick-up trucks, traversing rough sand roads in both extreme heat and cold, with a lack of food and water. Given the remote nature of the journey, the number of people who have lost their lives on the crossing is very difficult to calculate. According to the IOM, the true figure of those who have died making the journey is much likely far higher than any official numbers account for. The people who attempt these dangerous journeys largely take one of two main routes across the Sahara: one originating in West and Central Africa, and the other from East Africa and the Horn of Africa. Here, we briefly explore the conditions along both routes.

Currently, people from Senegal, Guinea, Cote d’Ivoire, Nigeria and the Central African Republic head north via Mali or Niger, the majority heading towards Libya (UNICEF). According to Oxfam, people leave in the face of hunger, violence and persecution, while IOM has also identified changing climatic conditions and the recurring droughts that the Sahelian states face as being contributing factors to migration through the Sahara. In 2015, it is estimated that between 80,000 and 150,000 people crossed the desert zone in northeast Niger.

Many people begin the transit across the Sahara from Agadez, Niger, where people must wait in small houses on the outskirts of the city for the next truck heading to Libya. The people packed on the trucks have to be very careful not to fall asleep: if they fall off, the smugglers will not come back for them. No food or water is provided by the smugglers during the crossing.  In 2016, the bodies of 34 people – including 20 children – were found in the desert in Niger, having been abandoned by people smugglers.

East Africa and the Horn of Africa

This route is comprised of people fleeing enforced conscription, poverty, oppression and violence in Eritrea, Ethiopia, Somalia and Djibouti, with the route heading north through Sudan and into Egypt or Libya. The number of people making the journey is unknown, as no formal monitoring mechanism is in place, but it is clear that those who do make the journey suffer greatly along the way.  Witness statements describe beatings, negligence and sexual exploitation at the hands of smugglers, while people also may be abandoned in the desert, given false directions, forced into unpaid labour, or sold to militias.

In order to better understand this route, the Regional Mixed Migration Secretariat (RMMS) created the Mixed Migration Monitoring Mechanism Initiative (4Mi), which has focused on those leaving the Horn of Africa. After interviewing 1,300 migrants between 2014 and 2016, 4Mi found that at least 1,245 people had died while on the move in Sudan, Egypt or Libya. Given that this estimate was calculated from the testimony of a relatively small number of people, 4Mi believes that the number of people who die making the overland journey may be even greater than the number that die while attempting the Mediterranean crossing.

We now turn to the testimony of Daniel, a young Eritrean man rescued by MOAS in June 2016, who travelled from Eritrea to Sudan and on to Libya in order to escape persecution. Here, he describes his experience of the desert crossing.

We went out of Khartoum on May 5th 2015. It took us 10 days to cross the desert to arrive in the closest village in Libya. There were 55 of us, but we lost six people there in the desert. We hardly had any water after three days.  Then the smugglers mixed benzene with the water so we wouldn’t drink too much. We had some food we brought with us and some beans.

When we got to the village, everyone had to pay $1600 to get out of the ‘store’ (literally, a store for humans). We had the money, so they did not keep us in that place. Two could not pay though: a girl and a man of our age (around 24), so they kept them there.

After we had paid the money they took us to a bigger place where we would be sold on. Then there was a fight between the people who held us and ISIS. Six of the smugglers died defending their money (we were their money). ISIS launched a mortar and it came through the roof of the building: eight of us were injured. One of the men was badly injured on his head. He had seizures, but now he is recovering. There was another man who had injuries in his spine; he is now recovering too.

Then they took us to the sea and loaded us like animals on a small ship. We were lucky: we were rescued without any casualties.

Daniel and the two injured men travelling with him were rescued by the MOAS crew on 29 June, 2016. Having survived his ordeal both on land and sea, Daniel is now safely in Switzerland, where he is waiting to receive a decision on his application for asylum. He heard recently from a close relative of one of the people they had to leave in the smugglers’ ‘store’: one year later, the girl and the young man are still being held for ransom.