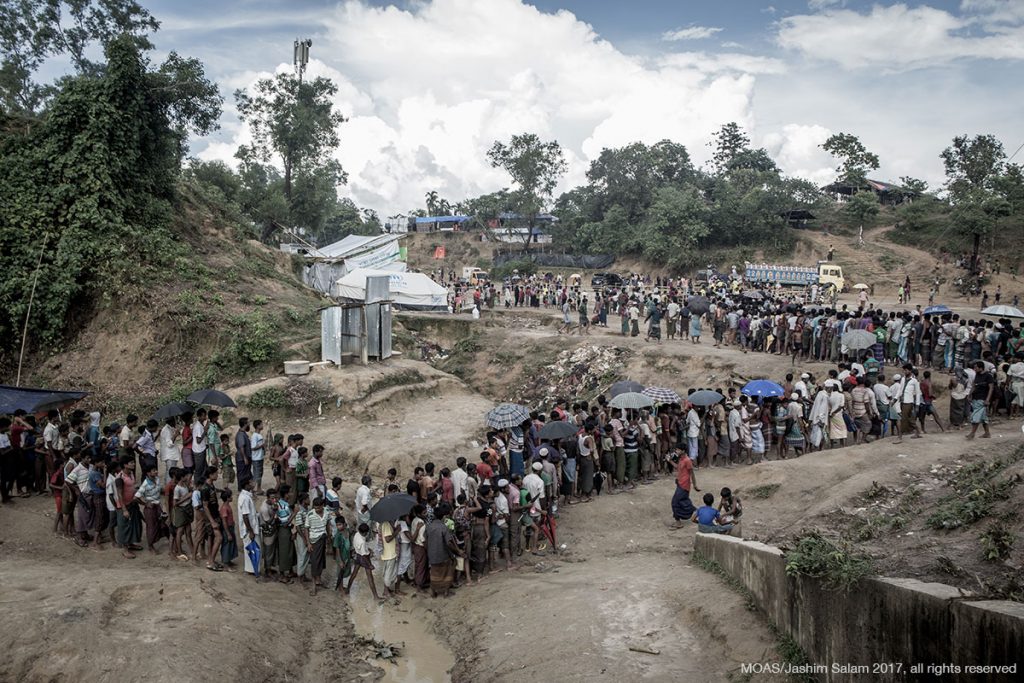 The 25th August is known as ‘Rohingya Genocide Remembrance Day.’ This sobering day is often met with silent prayers in the Rohingya refugee camps across Cox’s Bazar – with the Rohingya people remembering those who lost their lives in the tragic events of 2017, when Myanmar’s army attacked the Rohingya communities – sending an exodus of people fleeing across the Bangladesh border. More than 900,000 people now live in camps across Cox’s Bazar province in Bangladesh – making it the largest refugee settlement in the world. About half of the refugees are children.

Rakhine State, where the Rohingya people have lived for generations, has a history entrenched with ethno-religious violence. The Myanmar government effectively discriminated against the Rohingya as they were not granted citizenship and were forcibly treated as stateless. Both in 2012 and 2016, riots and violence against the ethnic group led to communities being displaced and many people fled to neighbouring countries. However, the violence peaked in August 2017 when the Myanmar military carried out human rights violations against the Rohingya people. Thousands fled on foot, across harsh terrains, or by boat, before reaching Bangladesh. The Bangladesh government kept the border with Myanmar open and local Bangladeshi villages generously took in new arrivals.

In Myanmar, human rights conditions have continued to deteriorate for Rohingya communities due to ongoing conflict, and there has lack of assurance from the military that they will not continue their oppressive actions despite international pressure. Thus, the stateless Rohingya refugees remain in the world’s most densely populated refugee camp, without any certainty about their future.

MOAS IN SUPPORT OF THE ROHINGYA

In response to the 2017 crisis, MOAS launched operations in Bangladesh on 3rd September. After conducting an in-depth needs assessment of the unfolding humanitarian crisis, MOAS recognised an acute food shortage and used the Phoenix boat to deliver 40 tonnes of humanitarian aid to the Bangladeshi government. The local MOAS team then established two aid stations or primary health centres to serve the expanding refugee camps and the host community in Shamlapur and Unchiprang. Our dedicated doctors, nurses, midwives and pharmacists had treated over 90,000 people by November 2018.

The challenges the Rohingya community are exposed to are vast and multifaceted and are particularly exacerbated by the conditions in the camps.  The shelters are often made from scrap bamboo and tarp which can be particularly dangerous in the flood prone landscape. The Bangladesh monsoon season runs from June through to October and the heavy rainfall and storms can cause immense damage across the camps. Beyond damage to infrastructure, the rainy season increases drowning risks in the camps and also exacerbates the risk of disease (inc. Malaria, Dengue and Hepatitis) as sanitation facilities are compromised.

In 2019, MOAS’ technical experts focused on delivering specialist Flood and Water Safety training to refugees and host community volunteers, who could respond to emergencies in hard-to-reach areas. Our operational shift to water safety reflects a recognition that building the capacity of refugee communities to manage life-saving emergency response systems during the monsoon season remains a key priority in the camps. During the recent heavy rains and flooding, a young boy’s life was saved by a volunteer who had received the training and equipment from MOAS, by building community resilience – lives can be saved.

Together with monsoon flooding, fires are one of the most dangerous/deadly threats to infrastructure and security in the refugee camps, worldwide. For this, MOAS is working to address the need for safe and effective firefighting.

As MOAS reflects on the past 4 years, we will continue to support the refugees together with our partners, as we also call for further dedication in finding long-term solutions for their displacement and securing their rights.

MOAS will continue to work and collaborate with our partners to provide aid and technical expertise to the most vulnerable communities in need of humanitarian assistance. To save lives and avert a further worsening of the situation, MOAS needs your support to keep on with Flood and Water Safety training and save lives.