‘I feel at home, away from home’: poetry and forced migration 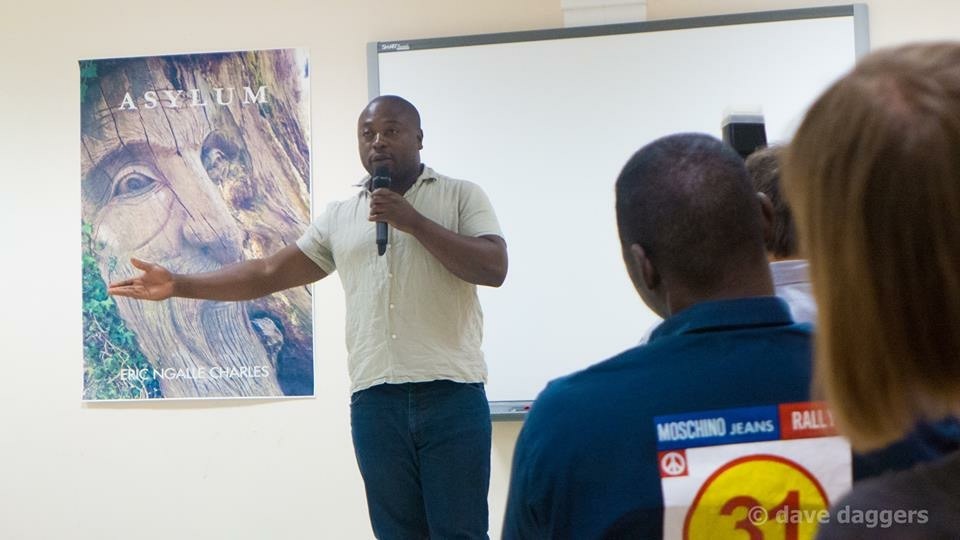 Since our inception, MOAS has been supported by many kinds of artists and writers, whose work is able to show new perspectives on forced migration, as well as inspiring empathy and action. Therefore, in honour of World Poetry Day, MOAS spoke to Eric Ngalle Charles – a poet, author, playwright and Cameroonian refugee now living in Ely, Wales – on the topic of poetry and forced migration. Eric has written extensively on the theme of seeking refuge, and now works with refugees and asylum seekers to help them make sense of their experiences of forced migration through the process of creative writing.

Eric, can you tell us a little bit about your work and how your own experiences of seeking asylum have shaped the work that you produce?

“I left Cameroon in such haste. I was a victim of human trafficking, ending up in Russia. The Cameroonian embassy in Russia said I was a Nigerian, but the Nigerian embassy could not accept me because I was Cameroonian. So, after 2 years and 2 months of being completely destitute, I managed to obtain a Zimbabwean passport and I finally came into Wales as a Zimbabwean.

I was lucky enough to be introduced to a company called Literature Wales, and at that time they were doing one-day workshops on the theme of literature and trauma. Since then, I’ve published 6 poetry anthologies. I have been engaging with other people who were victims of circumstance, and who left their countries in haste, seeking a new abode. My writing is based on using literature as a means of overcoming trauma. I engage with different members of community groups and they help me achieve this end.”

I wanted to ask you a little more about how literature and poetry can help work through trauma, and how you think that writing is helpful to people in these situations.

“I always try to put this into perspective. In European societies, when you talk to people about movement, people think about the labour of moving homes, of moving your property and belongings from one city to another. But movement for asylum seekers or refugees is so traumatic that is it’s not only about the initial displacement. It’s not only about you losing your home, it’s about capture, some of it is treacherous movements, it’s climbing mountains, some of it is crossing the seas and they are doing that constantly to seek peace and finding none. There is continuous trauma until the point of arrival.

Now be that in Greece, be it Malta, be it in Wales; the fact that you have arrived at a destination is also the beginning of another trauma. You have the linguistic barrier, there’s also the cultural barrier, and you have people who develop a kind of mental barrier so that there is little room for integration. How do you start to help these people feel accepted in this new abode? You use different emotional triggers. For example, in one of my workshops I use pictures to paint where I was at a particular time of my life. One of the people who attends my class is an Eritrean asylum seeker. The only familiarity he finds between Wales and his country is the smell of coffee, so every time he goes into a coffee shop – even though he cannot afford to buy coffee – the smell reminds him of home.

So, there is this permanent tragedy that people don’t understand; people think that fleeing home is one aspect and that the idea of arriving at your destination will settle it. However, it is a constant trauma and small things can trigger this trauma. This is what I use. My work is not based on making people talk as if they are enduring trauma, but is about familiarity: for Abdul it is the smell of coffee, for another friend it is the fact that when he was in Tripoli prison the guards would give one person a toothbrush and the other person a toothpaste, so the image of toothpaste and a toothbrush takes this person to when he was in prison. I’m not a therapist, I’m just somebody who believes in the power of literature, and the power of speaking.”

Forced migration and asylum are often quite controversial topics. Do you think there is something about poetry and literature that can change people’s ideas and inspire empathy?

However, you can tell a lot about a society by the way it treats its artists, its writers, its poets. I look at this human migration now, not from a political viewpoint – for that is not my strong point – but from a literary perspective. You see, I have a lady in my class and she doesn’t understand a word of English, but she performs perfect poetry in a language which is part of Bantu. Most of these poems are tribal; the only thing refugees have is their memories. They don’t carry household items, and because of the trauma the only thing they have left is their memories. When this lady stands in front of an audience and she remembers this song that is ancient and mystic to her – the only thing that she knows – she tells her story; not because she has been traumatised, but to say: “This is my memory”.

It’s like myself, when I first came to the UK, into Wales, I wanted to talk about why it is that I left my home at such a young age, why I became a victim of human trafficking, why it is that I ended up in Russia. I met a wonderful writer and he said to me: “Ngalle, in some societies, silence is gold, talking is silver. In some societies simply answering yes or no to a question is tantamount to decapitation.” He said, “Here it works, your star will shine, but not under the gallows.” It wasn’t about politics, it was about making a human connection. So it is that language, poetry, literature are wonderful tools. I encourage people who come to my classes to write whatever they want to write. They shouldn’t be afraid of using literature; everyone has a story to tell.”
Below you can find some examples of Eric’s work:

I saw a flower,
today my thoughts drifted to you.

Under the warm blanket of your memory,
I feel at home, away from home.

Watch out for Eric’s memoir which is being published by Parthian books in May. The next blog will be up on Friday and you can sign up to our newsletter at the bottom of this page for all the MOAS news and updates. Please support our rescue missions by giving whatever you can to help us save lives at sea.