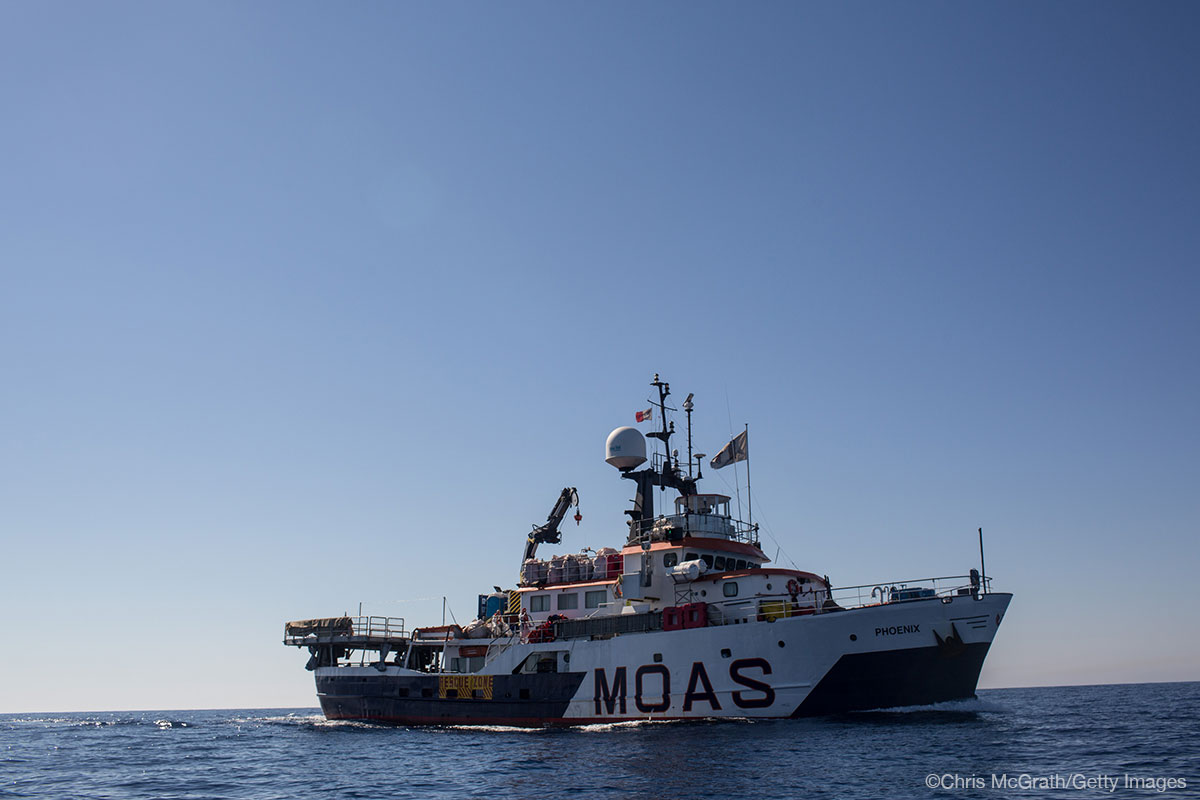 August 2017 marks the third anniversary of MOAS’ creation and the launch of our first life-saving search and rescue mission. Here, we look back at MOAS’ beginnings as a civil society response to the humanitarian crisis in the Mediterranean, explore the different forms civil society can take, and how we have been supported over the years by many different communities and initiatives, all of them acting in the same spirit: that of civil society in action.

When we as an organisation talk about ‘civil society’, we mean both a community of citizens brought together to act on shared interests or concerns, as well as more formal non-governmental or not-for-profit organisations, including community groups, faith-based organisations and foundations. For many decades, civil society has played an important role across the globe in responding to crises of displacement and forced migration, as individuals and communities have come together to welcome and provide aid to people fleeing war and persecution. Over the years, so many everyday citizens have volunteered their skills and resources to help in whatever way they could; from the thousands of Canadians who have come forward to assist in resettling refugees since the launch of Canada’s private sponsorship scheme in 1979, to the countless people who have offered their time and friendship in small grassroots organisations working to make life in a new country easier.

Since 2014, the response to the arrival of refugees across the Mediterranean – so often called the ‘refugee crisis’ – has seen new initiatives and projects as well as established organisations channelling an outpouring of support for those forced to leave their homes.  Projects have included emergency relief – as in Calais and Lesvos – integration initiatives, and advocacy campaigns, all acting in the spirit of solidarity and in the effort to protect human rights.

MOAS as a civil society response

All of these initiatives have grown from the recognition of a need and the willingness of individuals, groups or organisations to step in where governments or institutions are unable to help. This was true of MOAS’ own founding, which came as a direct response to continuing deaths at sea and the terrible Lampedusa tragedy in 2013. When faced with the reality of the situation in the Mediterranean, Regina and Chris Catrambone, two Malta-based entrepreneurs, asked themselves how they could find a way to play their part in preventing the loss of life at sea. Building on their own resources and experience, they believed that there was the potential space – and desperate need – for private search and rescue (SAR) in the Mediterranean.

As the Catrambones brought together a team of humanitarians and operational and SAR specialists, MOAS was born as an emergency relief initiative that sought to provide much-needed SAR and post-rescue medical care to the thousands of men, women and children who were compelled to attempt the deadly sea crossing. Designed to operate in full compliance with international maritime law and in cooperation with authorities on land and at sea, the team aimed to demonstrate how professional and effective a civil society response could be.

In August 2014, MOAS’ vessel the Phoenix set sail from Malta as the first SAR NGO of its kind in the Mediterranean. Over the next 60 days, the crew rescued 3,104 people during what we call our ‘proof of concept’ mission, in which we demonstrated to the world that the idea of civil society involvement in SAR in the Mediterranean could truly work.

Since then, we are proud that the model that MOAS pioneered has been taken up by many other organisations, from international NGOs to grassroots voluntary groups. Since 2014, MOAS has rescued and assisted 39,921 people; together, the SAR NGOs at sea have rescued and assisted at least 167,900 people.

Throughout this journey, MOAS has been continuously supported and propelled by our dedicated community. We have been joined by volunteer rescue swimmers and chefs on board our vessel; from New Zealand to Turkey to Singapore, people have come together to fundraise within their communities; so many artists, musicians and writers have used their talents and work to raise awareness of our mission. Family-run foundations have recognised the need for our work and made generous grants, while in Auction for Aid, jewellery makers donate their pieces to raise funds. Over the past three years, every one of these individuals and groups have been crucial to our ability to keep our mission at sea, their actions reflecting the spirit in which MOAS was founded.

One of these groups is ‘Sauvetages en Musique’, a project based in France. Here, the founder of the group explains how the project began and how the community has come together to support the cause.

After seeing the photo of the baby [Alan Kurdi] washed up on the beach, my children, aged 8 and 10, said we must do something. My husband Mike and I are musicians and thought that perhaps we could put on a meal and a concert and invite our friends to come and help us. So I sent an e-mail to friends/neighbours asking if anyone was interested. We had around 30 people who wanted to join us. I then invited 6 local groups to come and play and they all said yes and were willing to play for free.

A team of 20 of us prepared and cooked the meal for 200 people. That evening, in November 2015, was a great success. We were able to distribute the profits between 3 organisations: MOAS, Medecins sans Frontieres and Medecins du Monde.

The team of volunteers were keen to continue with the project and so we set up the association Sauvetages en Musique in February 2016. We have since had another 3 fundraising events in March 2016, November 2016 and May 2017, with 12 different local groups coming to play and the same volunteers each time helping with the preparations. We have raised and distributed over 10,000 Euros and continued to donate each time to MOAS.

Our community have been incredibly supportive and the local press and radio have helped enormously with publicising our events. Also local businesses and producers have sponsored us by giving reductions on the food and drinks we have purchased for the events. The social aspect has also been amazing, bringing people out of their homes to meet each other and to be involved in the fundraising. It has been a great experience with the happy outcome of being able to provide aid to those in desperate need and to those who are helping them.

If you’d like to support MOAS and the work that we do, please donate what you can or fundraise for us on our fundraising platform. If you’d like to learn more about our mission and the story of MOAS, you can watch a documentary on our work here. Finally, if you would like to be kept up- to-date on our operations and get news on migration from our communications team, sign up for our newsletter at the bottom of this page or follow us on social media.