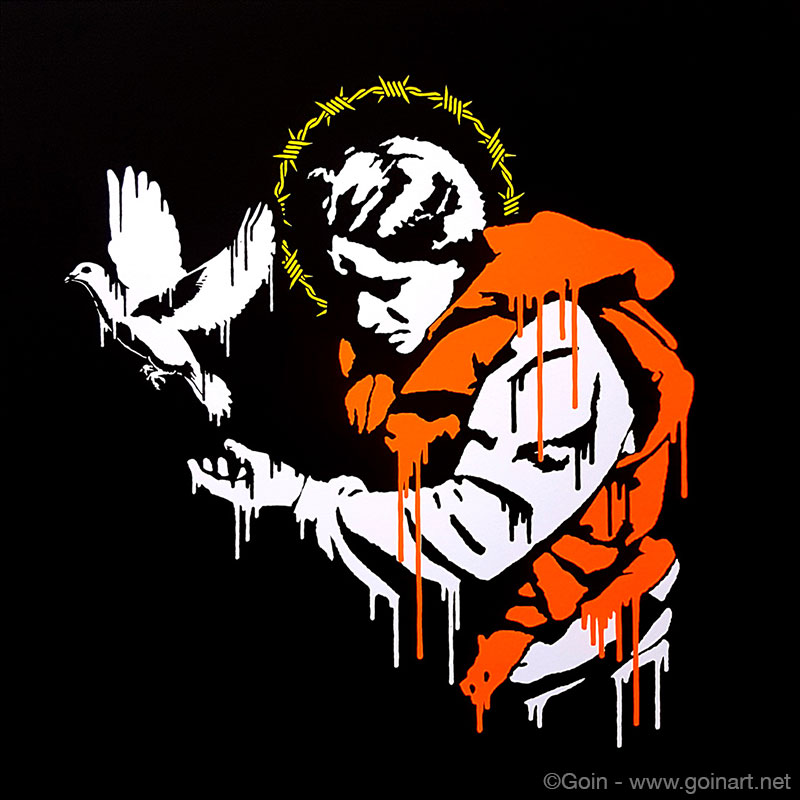 Art can be an incredibly powerful means to share ideas, inspire empathy, and forge connections between people. Since MOAS was established, both our work at sea and the ongoing humanitarian crisis in the Mediterranean have inspired artists to support our work. Here we reflect on the various ways artists have engaged with us, how they have approached the subject of forced migration, and what this has meant to our organisation.

One of the first artists to engage with us on a major project was Alfredo Jaar, who in 2016 created ‘The Gift’ as a response to the ongoing refugee crisis. The project took the form of simple blue boxes with an instruction to open, which unfolded on a statement on the humanitarian crisis in the Mediterranean. There were further instructions to fully dissemble the box, which opened to reveal an image of a beach on which Alan Kurdi’s body was found. On one side of the box was MOAS’ donation information, which could be popped out and kept, meaning the box could then be reassembled as a collection box for MOAS. The project took place at Art Basel, an international art fair in Switzerland, and over the course of the fair 12,000 boxes were distributed throughout the city.

Alfredo always had a very clear vision of how he wanted to use his artistic practice to positively impact our work by making the piece itself a fundraising tool, in which making a donation – giving a ‘gift’ – was a central part of the artwork. Alfredo told us that having previously worked with large international NGOs, for this project he had hoped to work with a less well-known organisation that would profoundly benefit from the attention and funds the project would bring; you can watch Alfredo talk about his reasons for supporting MOAS here.

Both MOAS and Alfredo were amazed by the hugely positive reaction to the project, in which people participated in the artwork by generously donating to our work. Through this project, over 65,000 Euros were raised, making a significant contribution to our maritime operations.

While artists such as Jaar have explicitly looked to fundraise for us, other artists have also used their work as a way to reach out to people and impact the way that they think about migration. This year, MOAS has been in collaboration with the Tunisian Pavilion at the Venice Biennale in their project ‘The Absence of Paths’.

The project is not housed in one location, as usually happens in the Biennale, where different nations have a defined space to exhibit. Instead, ‘The Absence of Paths’ takes the form of three ‘checkpoints’ dotted around Venice, from which visitors can apply for and be issued with a ‘Freesa’. These faux travel documents – ‘Free Visas’ – are universal human passports which allow safe passage globally. They are distributed from the checkpoints by Tunisian nationals who one day hope to migrate themselves, and who are only allowed to stay temporarily in Italy thanks to the work visas they have been granted for the Biennale. The project builds on the unusual environment of the Biennale, in which visitors move freely from national pavilion to national pavilion; in this context , people are able to move freely from nation to nation, with their ‘Freesa’ in hand. 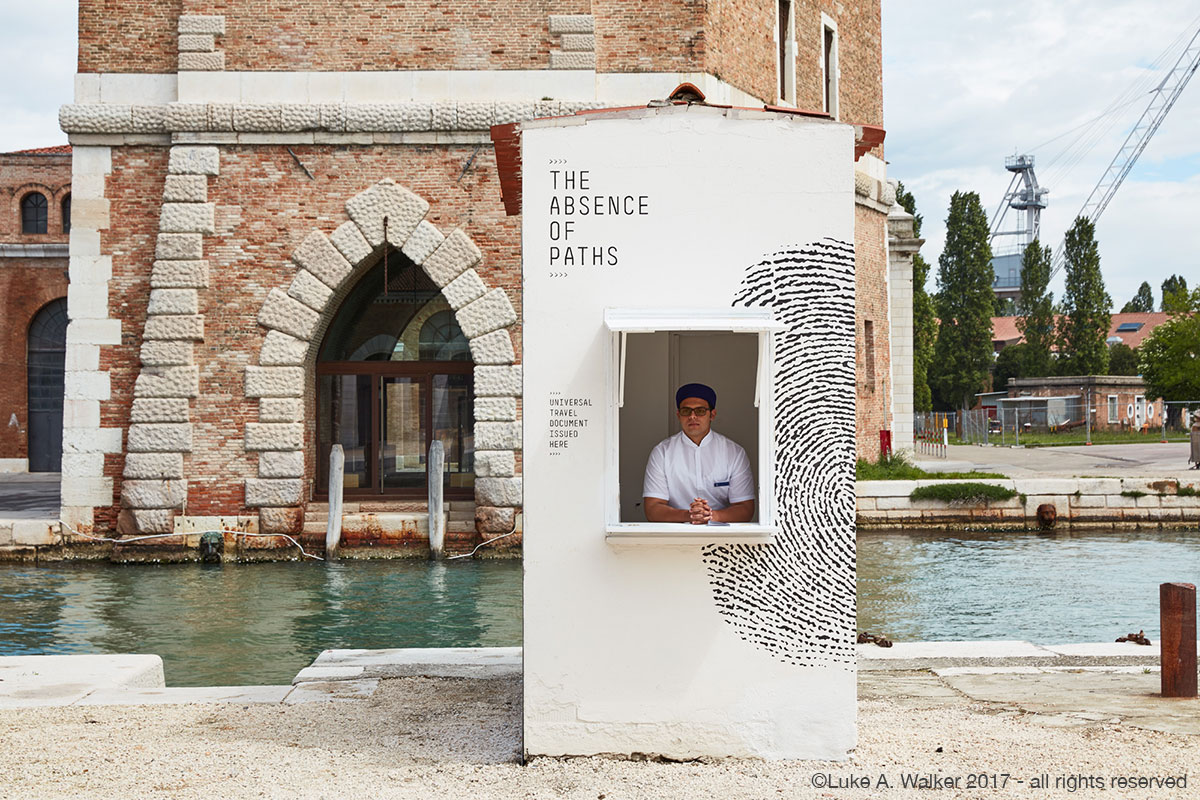 In imaging a world in which everyone can move, the project highlights the ways in which people are currently prevented from legally migrating because of where they were born, even if they have no choice but to leave their homes and countries. This project has therefore particularly chimed with MOAS’ ongoing advocacy for the establishment of safe and legal routes for people fleeing violence, poverty and persecution. The piece is uncompromising in its vision of a world in which a person’s humanity is enough to allow them to cross a border, and encourages people to reflect on the consequences of the absence of safe and legal means to travel. For us as a Search and Rescue NGO, so much of our focus must be on our life-saving operations, meaning that while we continually advocate for the creation of safe and legal routes, our capacity to focus on advocacy is limited. Projects like the ‘The Absence of Paths’ give us the opportunity to be part of major advocacy projects that encourage people to think about forced migration in a new way.

Alongside the advocacy aspect of the project, ‘The Absence of Paths’ has hosted MOAS’ information on their platforms, and encourages donations to our SAR mission as a way to have a direct impact in mitigating the effects of the lack of safe and legal routes. The project is also hosting a platform in which views on migration are shared and exchanged.

Beyond art shown in more traditional spaces, MOAS has also been supported by artists who use their work as a form of protest. Recently, MOAS has been supported by GOIN, a French street artist who uses the urban landscape as a backdrop for his political commentary. He has recently completed a piece called ‘Lady Refugee’ in Grenoble, France, in which he combines religious imagery with symbols of the crisis in the Mediterranean; a female refugee wearing a life jacket and a crown of barbed wire releases a dove of peace from her hands.

The piece’s position in such a public space acts to bring the humanitarian crisis in the Mediterranean to the streets and daily lives of the people of Grenoble, implying that this crisis is something that everyone should know – and care- about, using powerful imagery to protest against indifference. 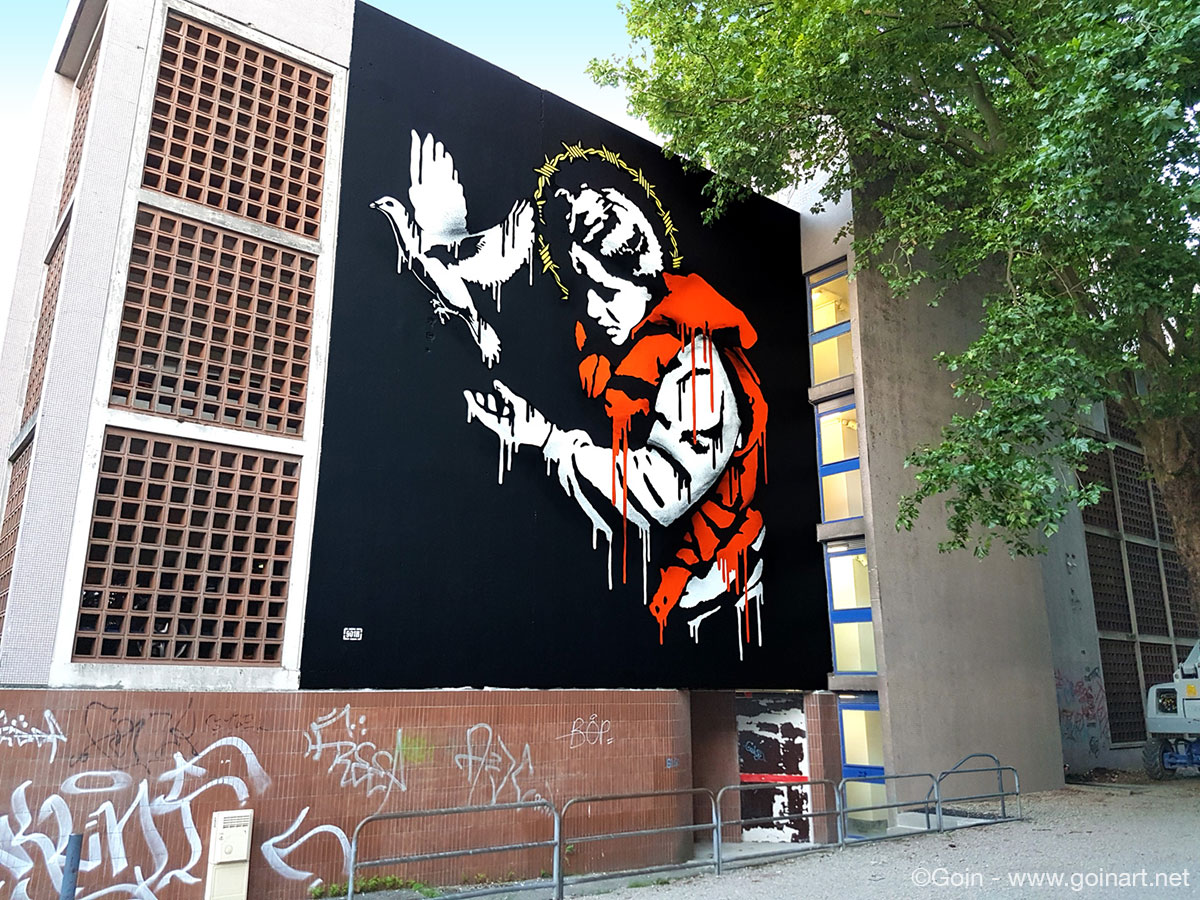 Beyond the visual impact of the work itself in situ, GOIN has also donated half the proceeds of prints of the piece to MOAS (which can be purchased here). This means that once again, an artist has found a way to translate the message inherent in their artwork into action through direct contributions to our mission.

Look out for our upcoming blog and podcast in which we focus on refugee artists and performers and discuss the relationship between art and forced migration. Please sign up to our newsletter at the bottom of this page for all the MOAS news and updates and support our rescue missions by giving whatever you can to help us save lives at sea.