The last vestiges of the hot season provide a sticky, muted backdrop to the bustle of Cox’s Bazar – a hub of activity where countless local and international NGOs are engaged in responding to the influx of hundreds of thousands of Rohingya, described as the world’s most persecuted minority, into Bangladesh from neighbouring Myanmar. 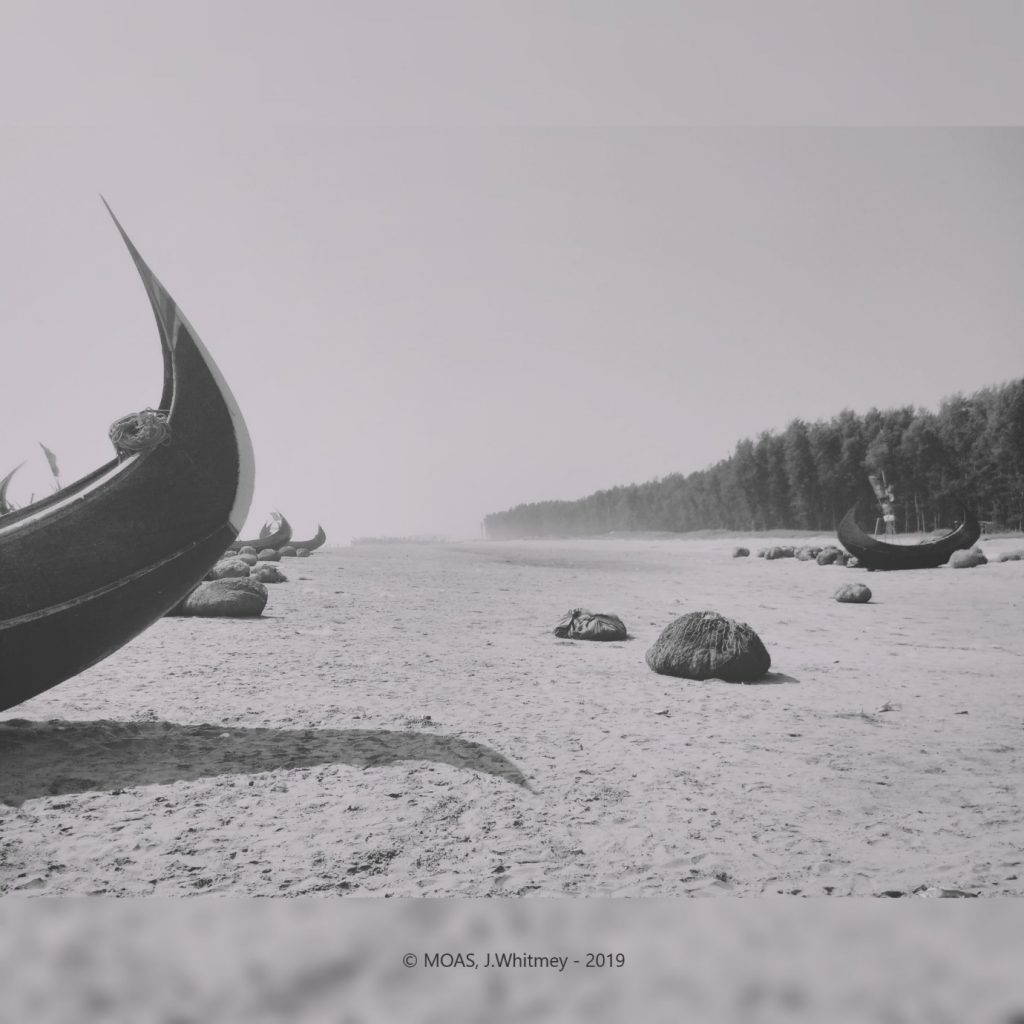 The beach at Cox’s Bazar

With monsoon season fast approaching – and the first cyclone of the season, Cyclone Fani, having caused several fatalities when it made landfall nearby – arrangements are being made across the refugee camps to ensure maximum preparedness and mitigate loss of life in the event of disaster. For this week’s blog, we spoke to two members of MOAS staff, Paul Chamberlain and Mohammed Salim Khan, about their work and experiences on the ground.

Last month, MOAS launched new programming to provide flood-rescue training to Rohingya volunteers. Paul Chamberlain, our Logistics & Operations Specialist, talked about the simple but effective train-a-trainer method used for these sessions, which allows us to maximise the number of volunteers we can reach, and about the risks faced by camp residents during the monsoon season.

“These camps are home to over a million people, and the first-line response is going to be the community, which is why we’re focused on training individuals within the community to respond to that event in a safe way. […] The plan within Bangladesh is if the cyclone hits, people will evacuate. Well actually, these people can’t evacuate, so what they have to do is be able to respond on a local level.”

Working closely alongside Paul as a trainer, Mohammed Salim Khan is a local Rohingya who has been collaborating with MOAS since the start of our operations in Bangladesh. He proudly announces that MOAS has already trained over 300 local volunteers to effectively use throw-bags in case of flooding or mudslides, both common occurrences during the rainy season. The urgent need for this training is highlighted by the recent news that one child died, and two others were injured, in a landslide in one of the camps. 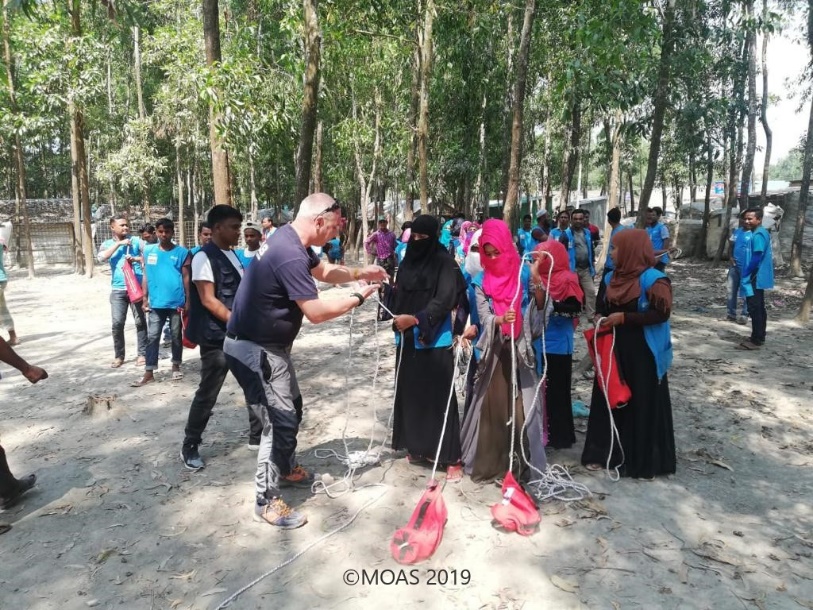 For Salim, the issues faced by the Rohingya are personal challenges. Born and raised in the Teknaf camps, he has known no other world, and is vocal about the need for stories like his to be heard, in order to bring about a better future for his children and for all Rohingya people. He emphasises the need for young Rohingya to receive a better education than he did, and points out that MOAS’ training is a valuable opportunity for Rohingya volunteers to gain useful skills that can help build up their communities. Listen to Salim tell his story about growing up in the camps, and talk about the challenges he sees Rohingya people facing today.

“We are not getting high-level education here in the camps. I have been living here a long time, but I saw so many boys and girls who just got an education until Class 5, then no more school for them. I am just saying to the world – we need a durable solution.”

Among those benefitting from MOAS’ training are a number of Rohingya women. Traditionally home-makers, circumstances have led some women to take a more public role in protecting and supporting their communities by engaging in our flood-rescue training. In a community where women are often expected to be chaperoned by male relatives, engagement in the project creates a unique opportunity for empowerment and up-skilling. Here, Salim and Paul discuss some of the challenges they’ve faced getting women involved in the programme, and the success that has been achieved.

“A lot of the time, the women within the Rohingya culture are seen as the people that do stuff, that achieve stuff. So especially when we’re talking about ground prevention strategies with children, there’s been a move to involve women more in community activities. But I think historically, a lot of this stuff has been around providing physical labour, whereas we’re now providing them with some skills, providing them with knowledge, and it’s that knowledge they can take forward.”

Paul is clear that the last few weeks have marked a period of growth for MOAS: we are now working closely with an unprecedented number of other aid agencies across more camps than ever before, to ensure the greatest possible reach for our life-saving training. As well as training community volunteers to tackle the challenges brought on by the monsoon season, MOAS will also be establishing Mobile Medical Teams (MMTs) that can respond to emergencies in hard-to-reach areas. 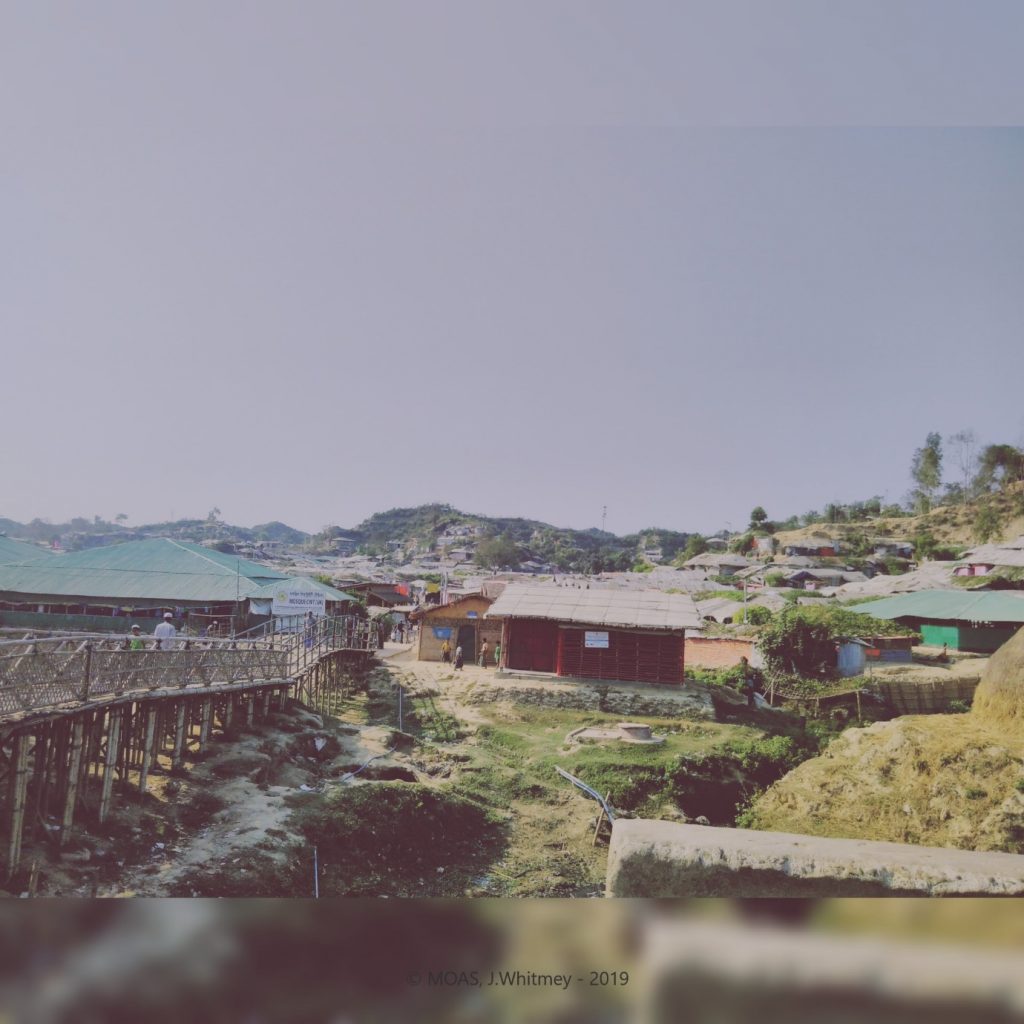 The refugee camp at Unchiprang

Driving along the main road towards one of the camps, Salim points across the padi fields to a group of hills on the horizon. ‘That’s Myanmar,’ he says. From here it looks eminently reachable – almost touchable – belying the perils of the crossing and the dangers that Rohingya people still face there. Despite never having been to Myanmar, Salim considers it his country, and longs for the day when his rights to a homeland are restored. Until then, his obvious enthusiasm and love for this displaced community are a prime example of Rohingya involvement in the collaborative effort to create a safe and liveable environment in the refugee camps.