The Rohingya refugee camps in Bangladesh are home to hundreds of thousands of children who have suffered through more than most people will in a lifetime. In this photo blog, we take a look at how some of these children spend their days. 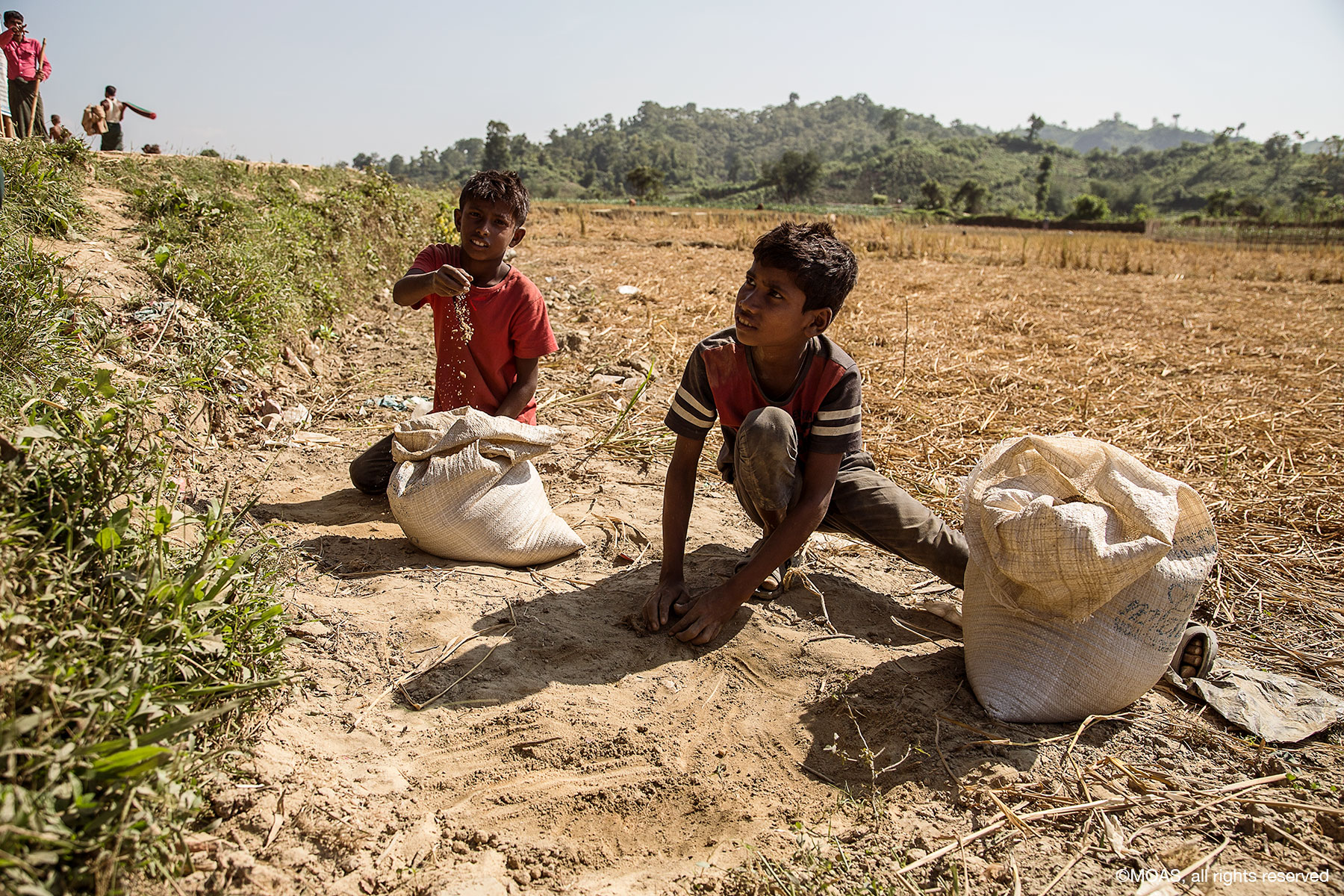 Boys from Unchiprang refugee camp collect soil for construction in an attempt to make some money for their families. 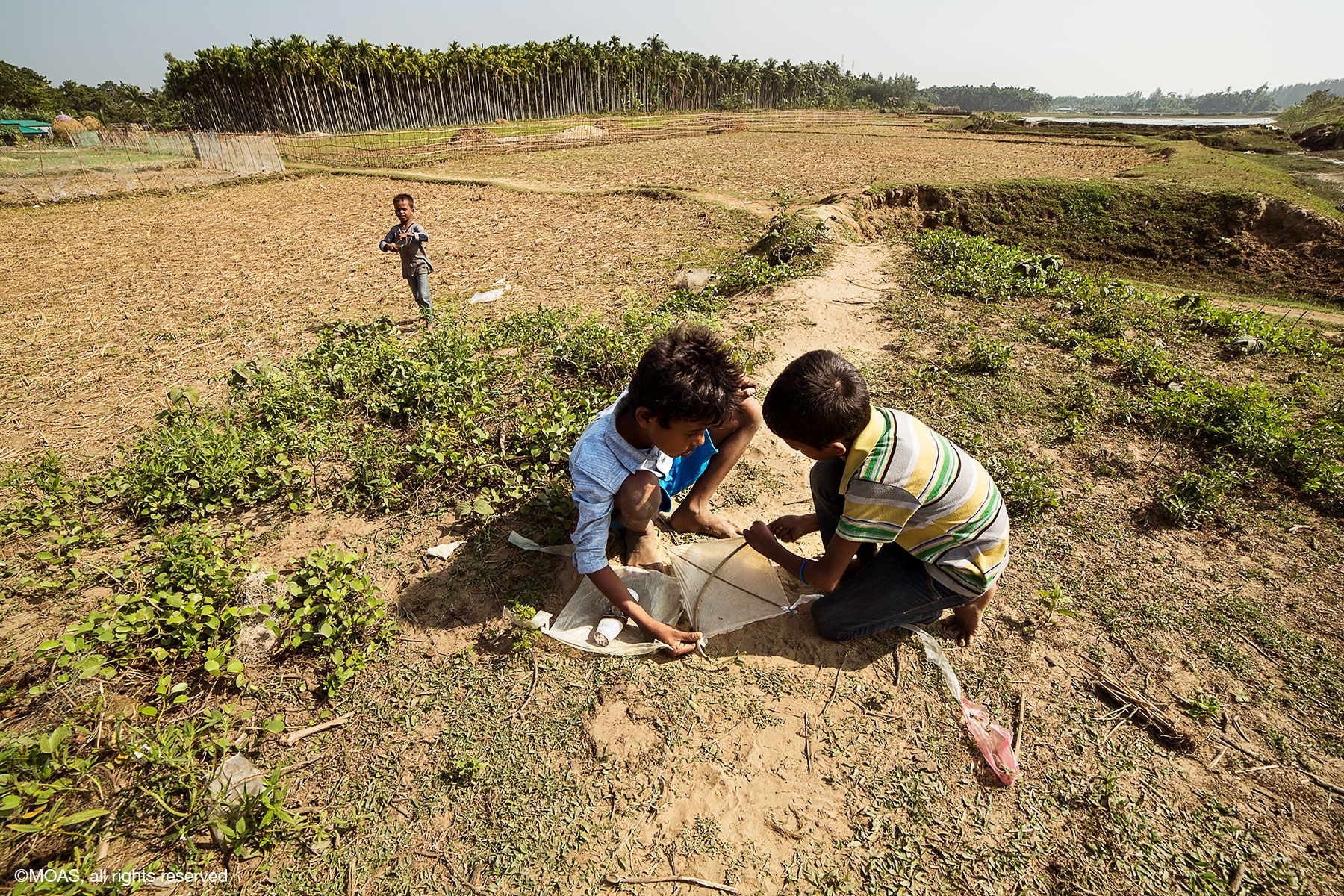 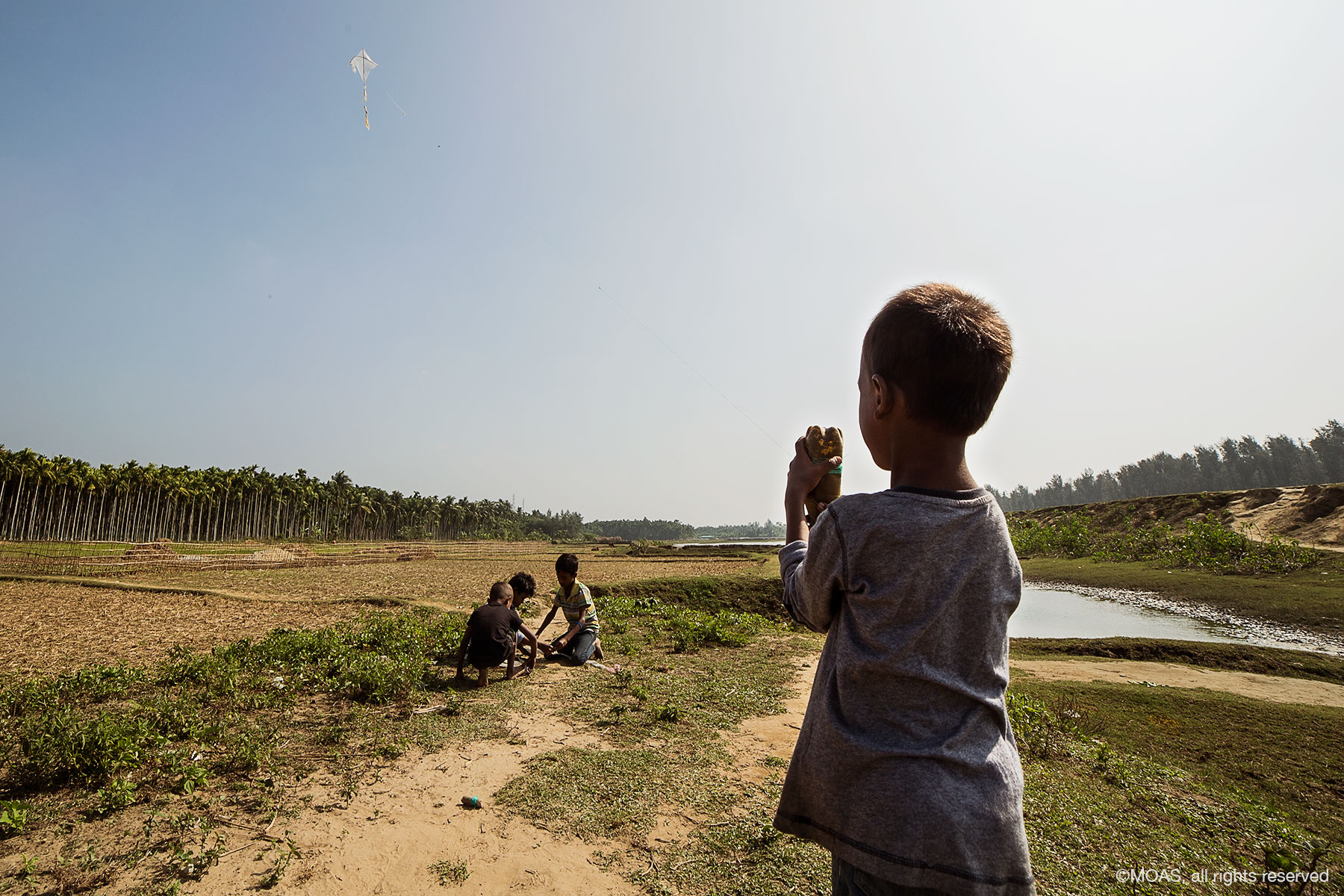 A boy flies his kite while his friends make one of their own. 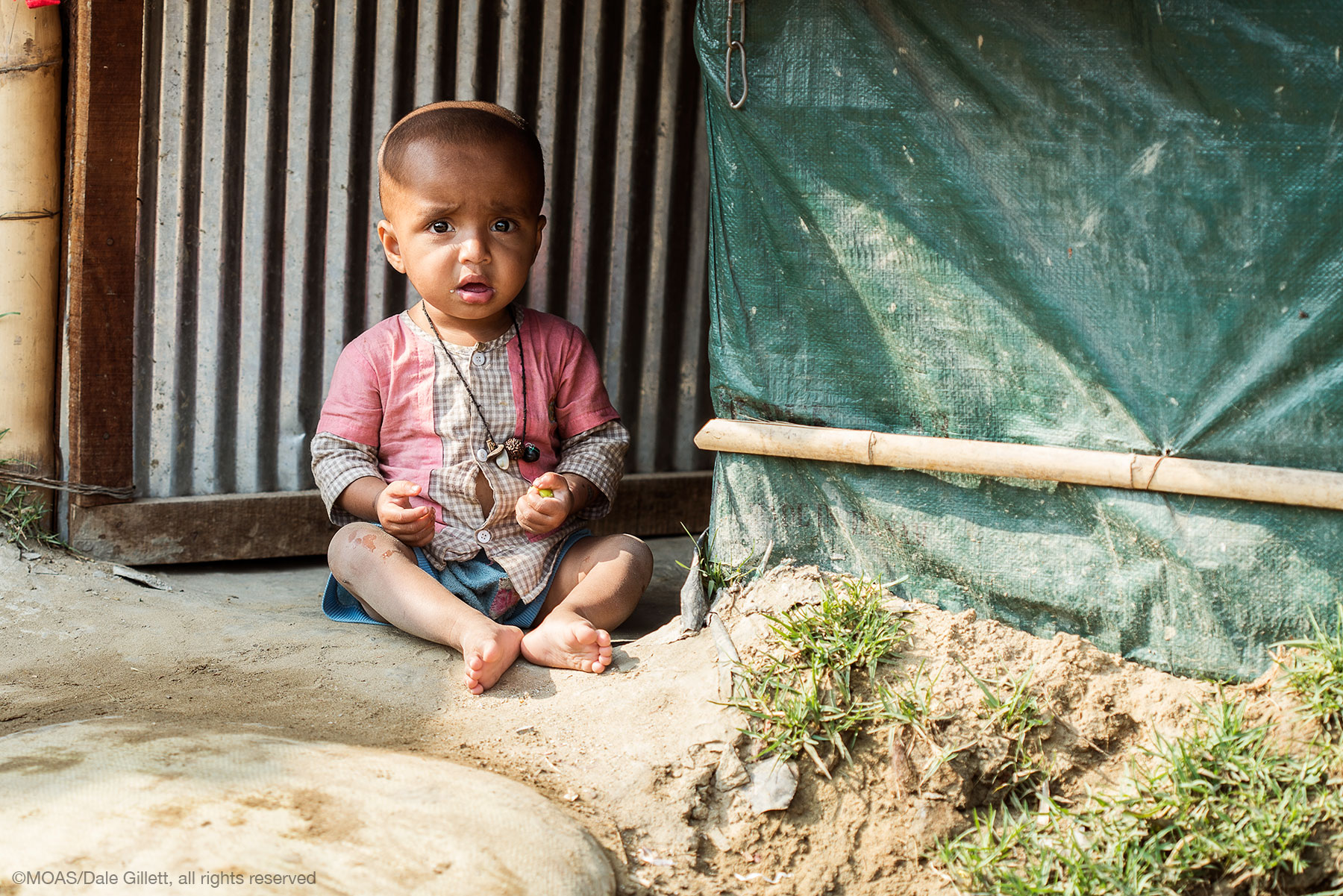 A young girl sits in the doorway of her makeshift shelter in Shamlapur. 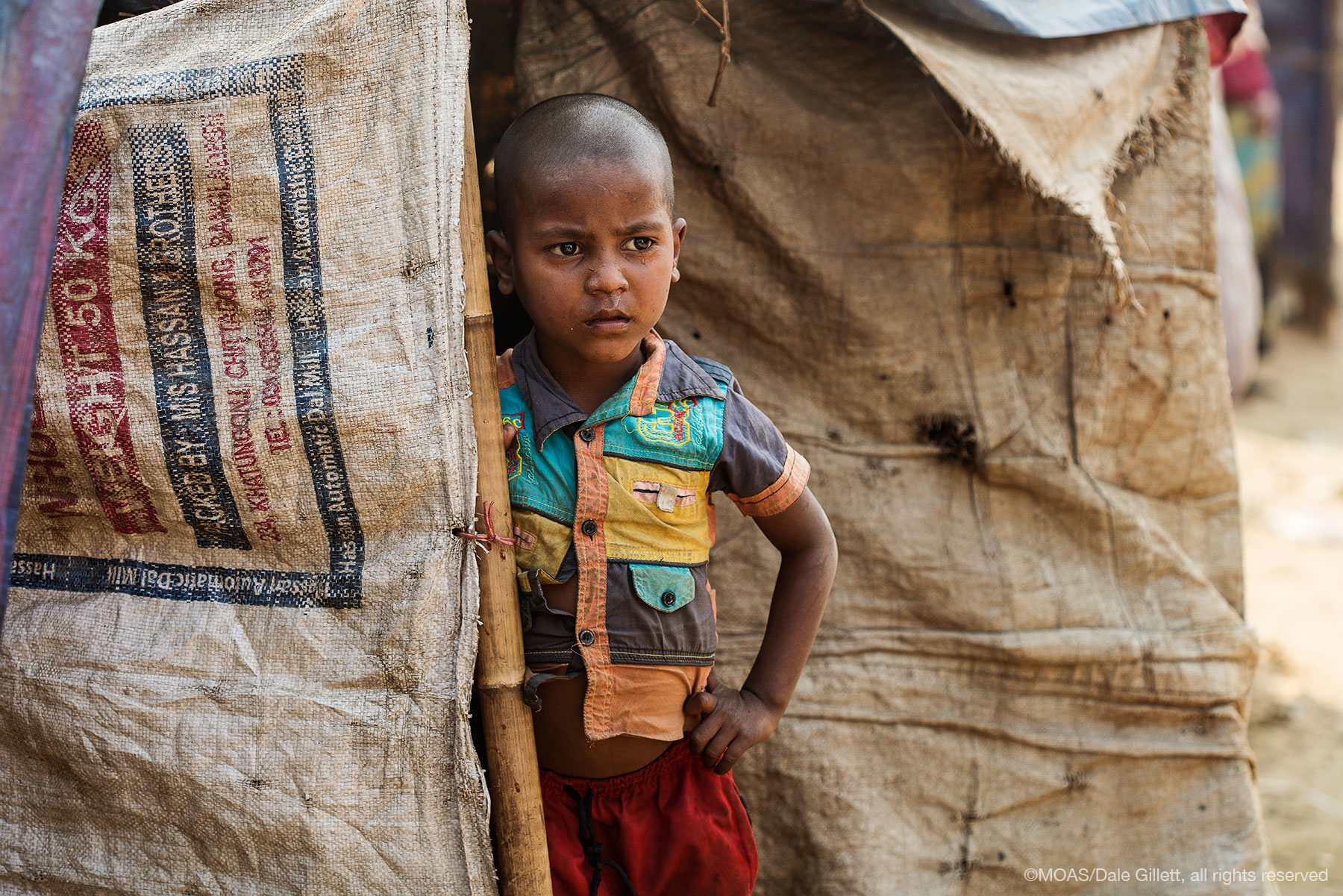 The shelters in the camps are made from whatever materials the people can get their hands on. This young boy stands just inside his shelter, made from food sacks and bamboo. 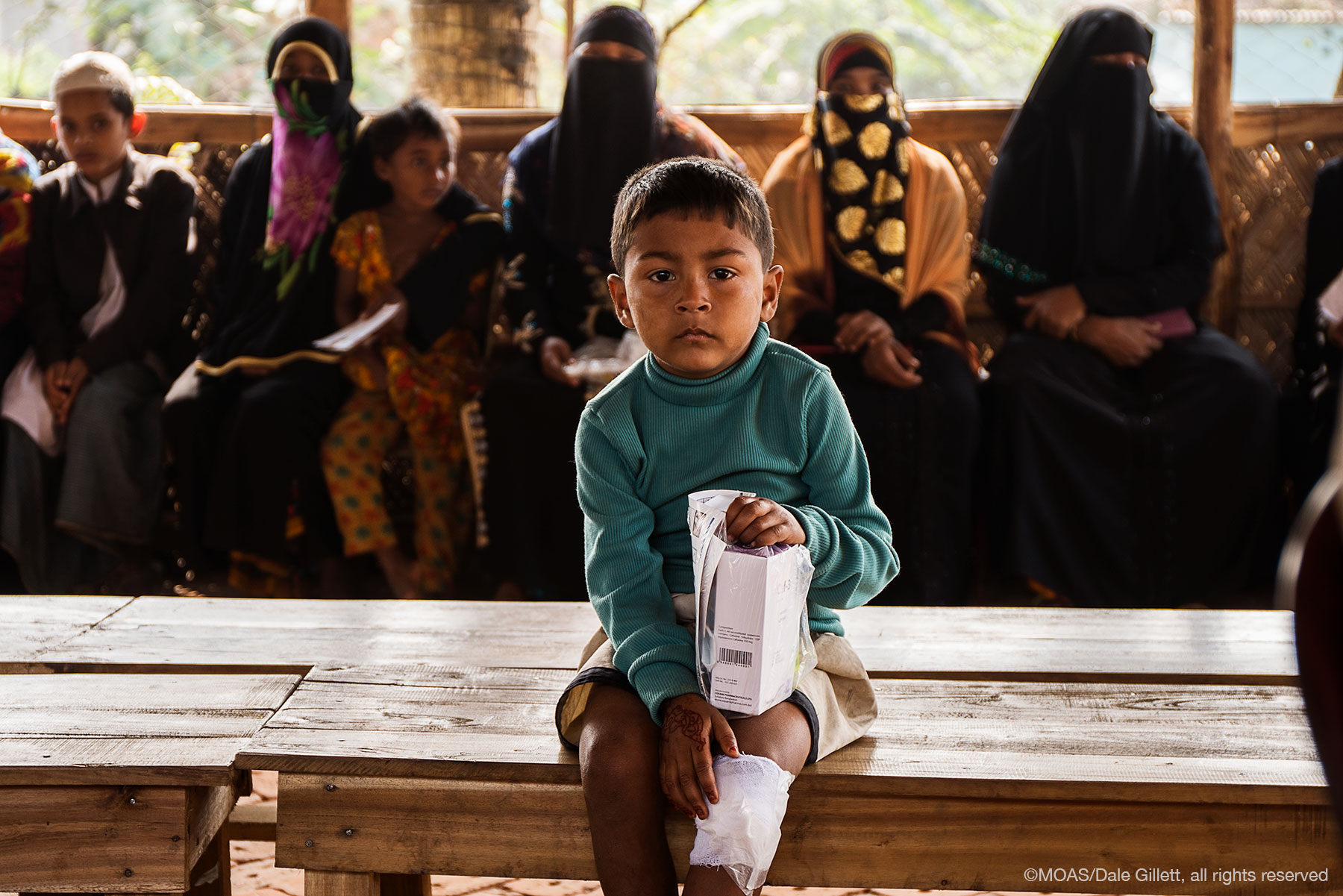 A young boy waits for his mother after being treated for a knee injury in MOAS’ Shamlapur Aid Station. 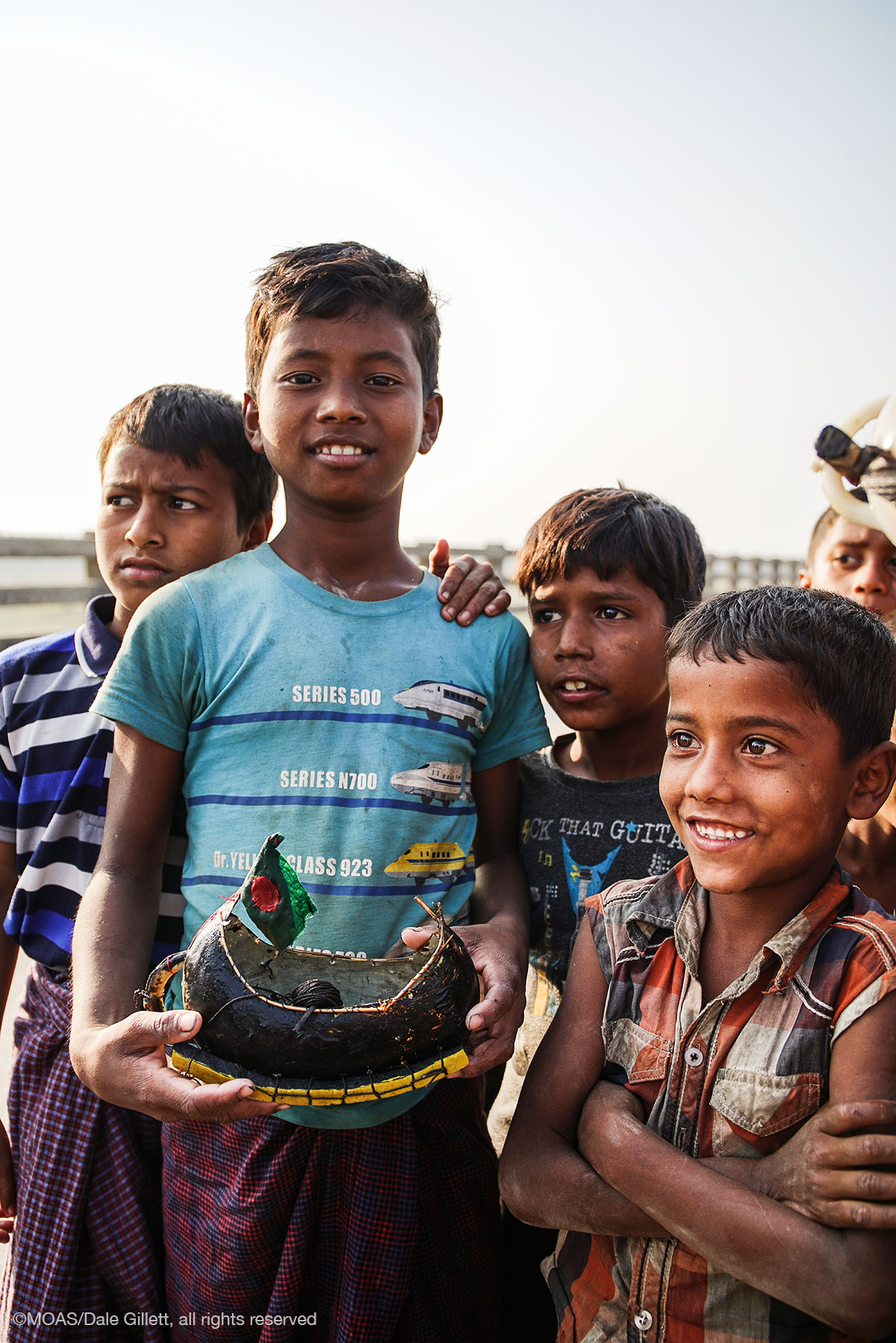 Bangladeshi fishing boats are a striking sight in Shamlapur. These Rohingya children have made their own toy replicas to play with. 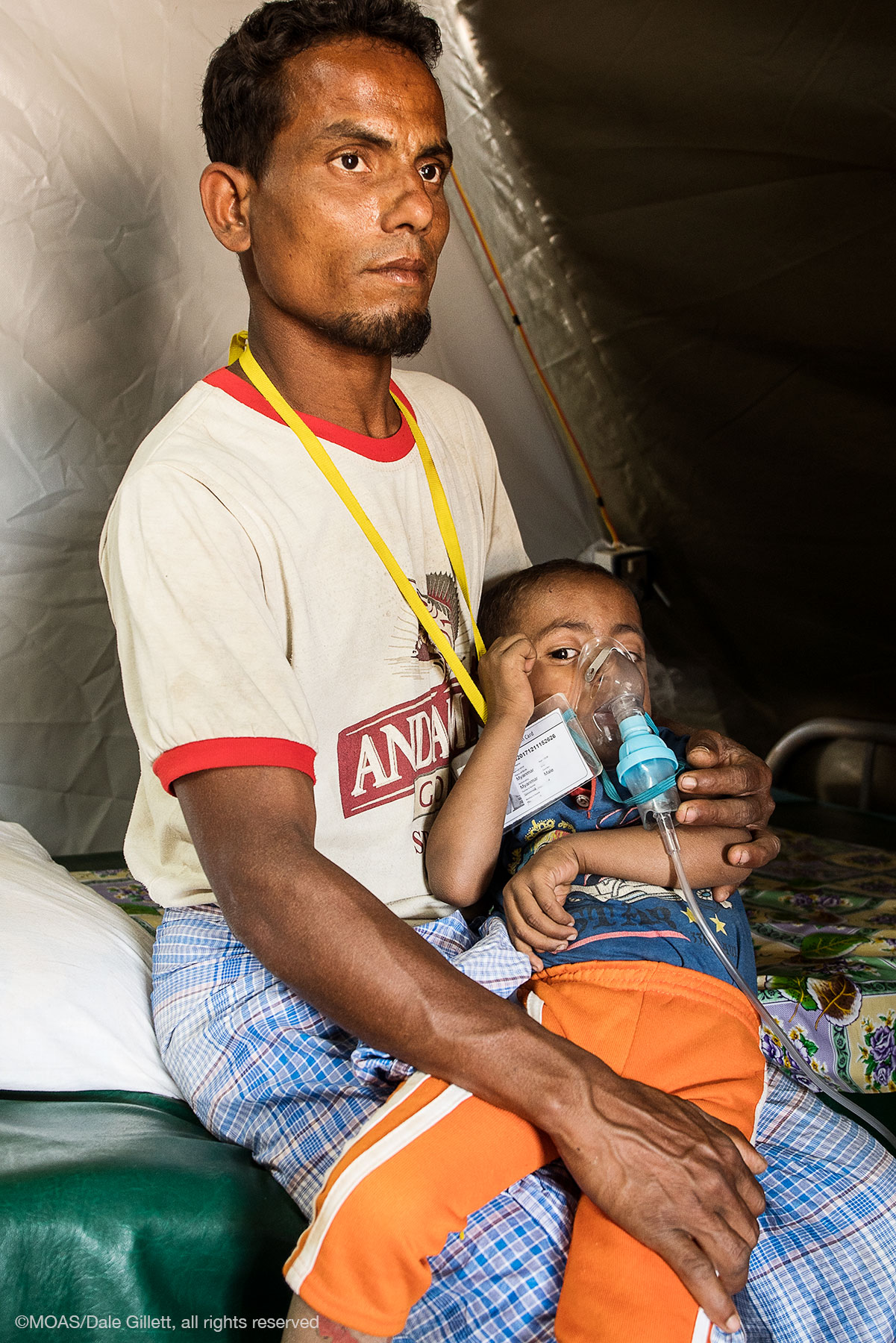 A father holds his son as he receives treatment via a nebuliser at the MOAS Aid Station in Unchiprang. 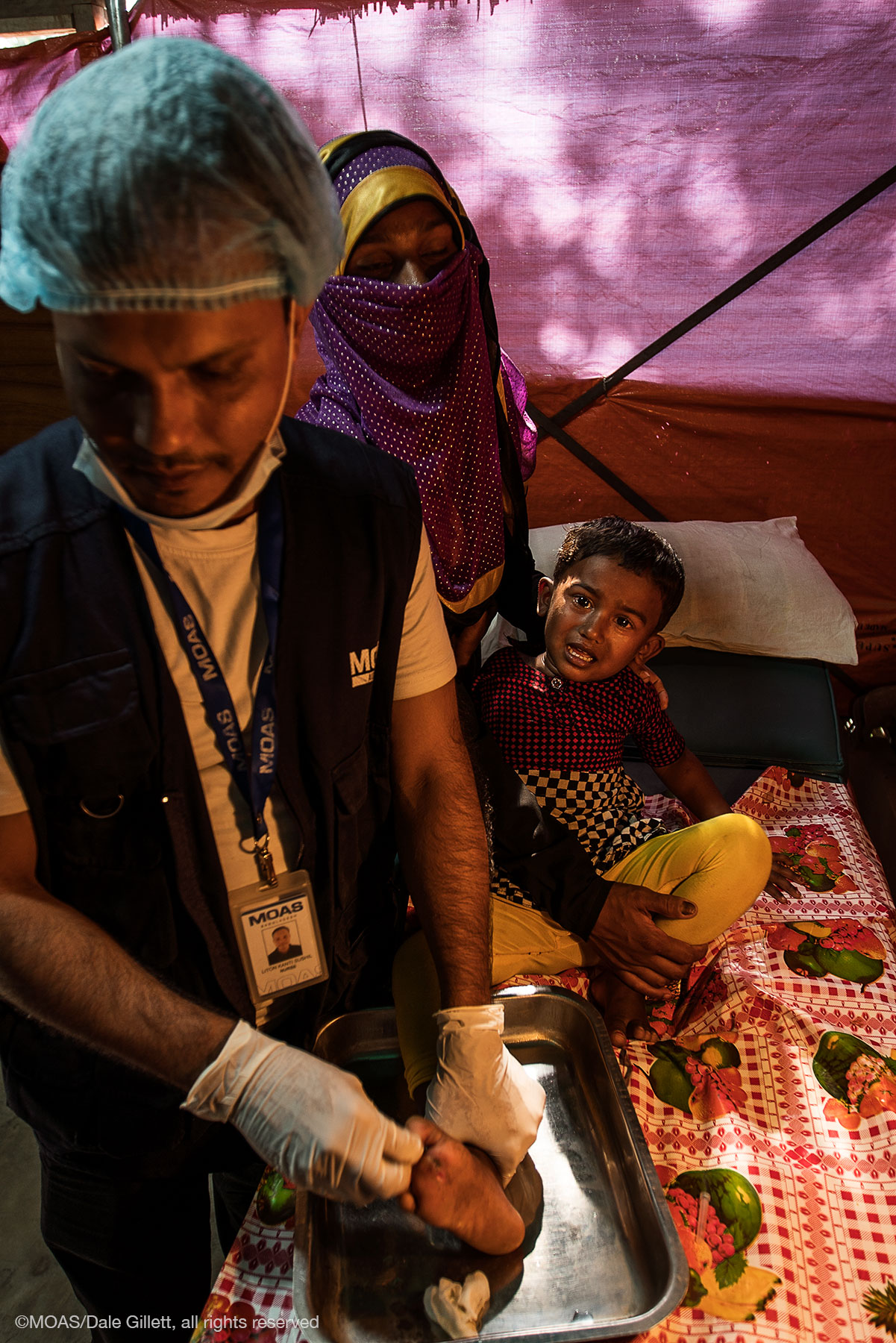 In the refugee camps, sharp objects can cause severe injuries to children who usually run around with bare feet. This young girl is having a cut on her foot cleaned ready to receive stitches from a MOAS team in Shamlapur. 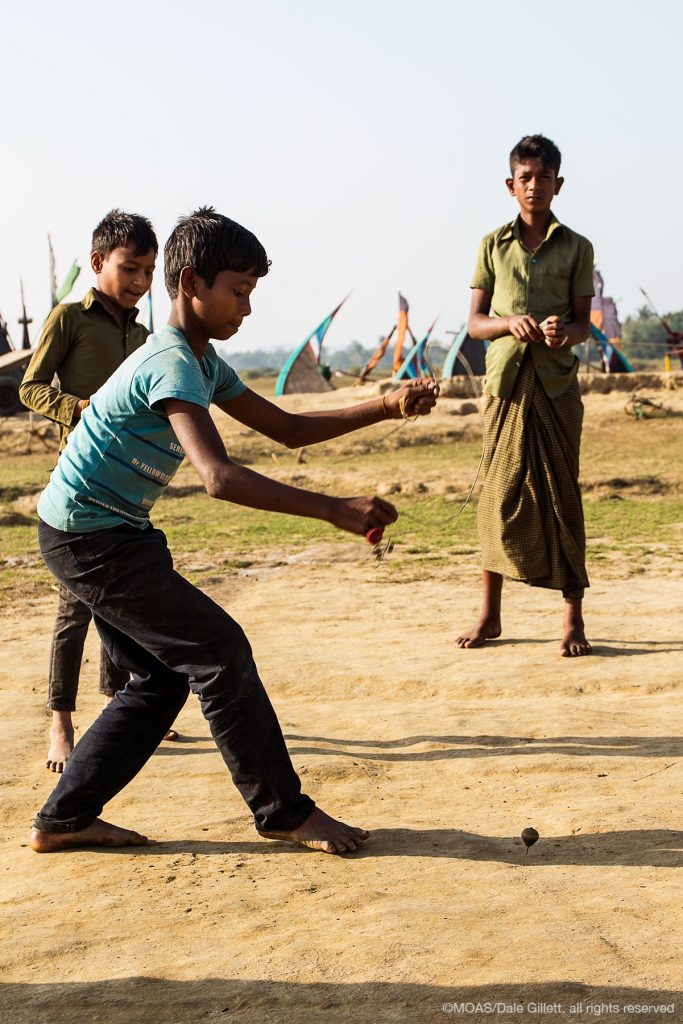 Children often craft their own ingenious toys. These boys made their own spinning tops and are playing with them close to the river estuary in Shamlapur. 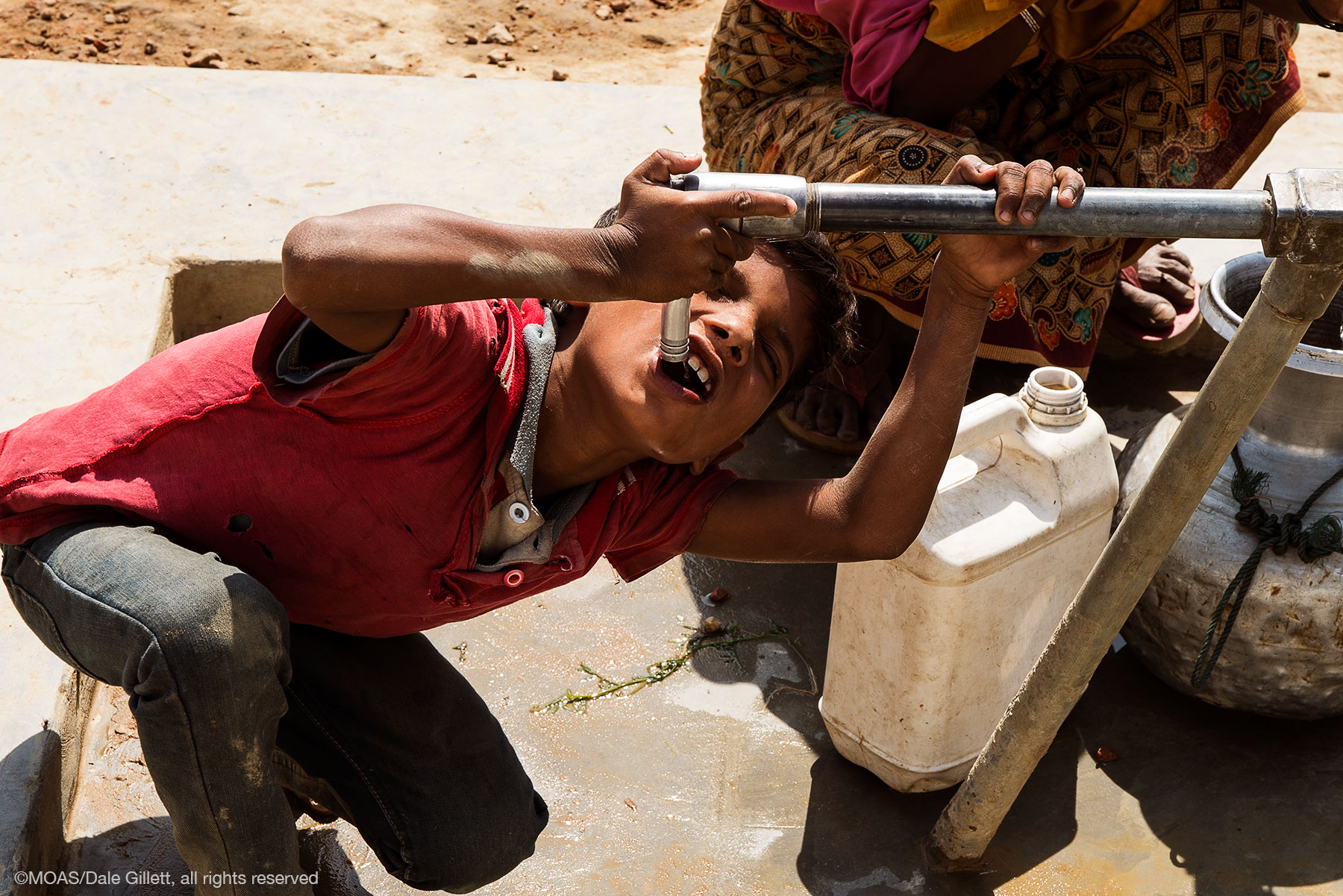 Despite the installation of clean water facilities by various NGOs, water can still be hard to come by; here, a young Rohingya refugee in Unchiprang drinks directly from the pump. 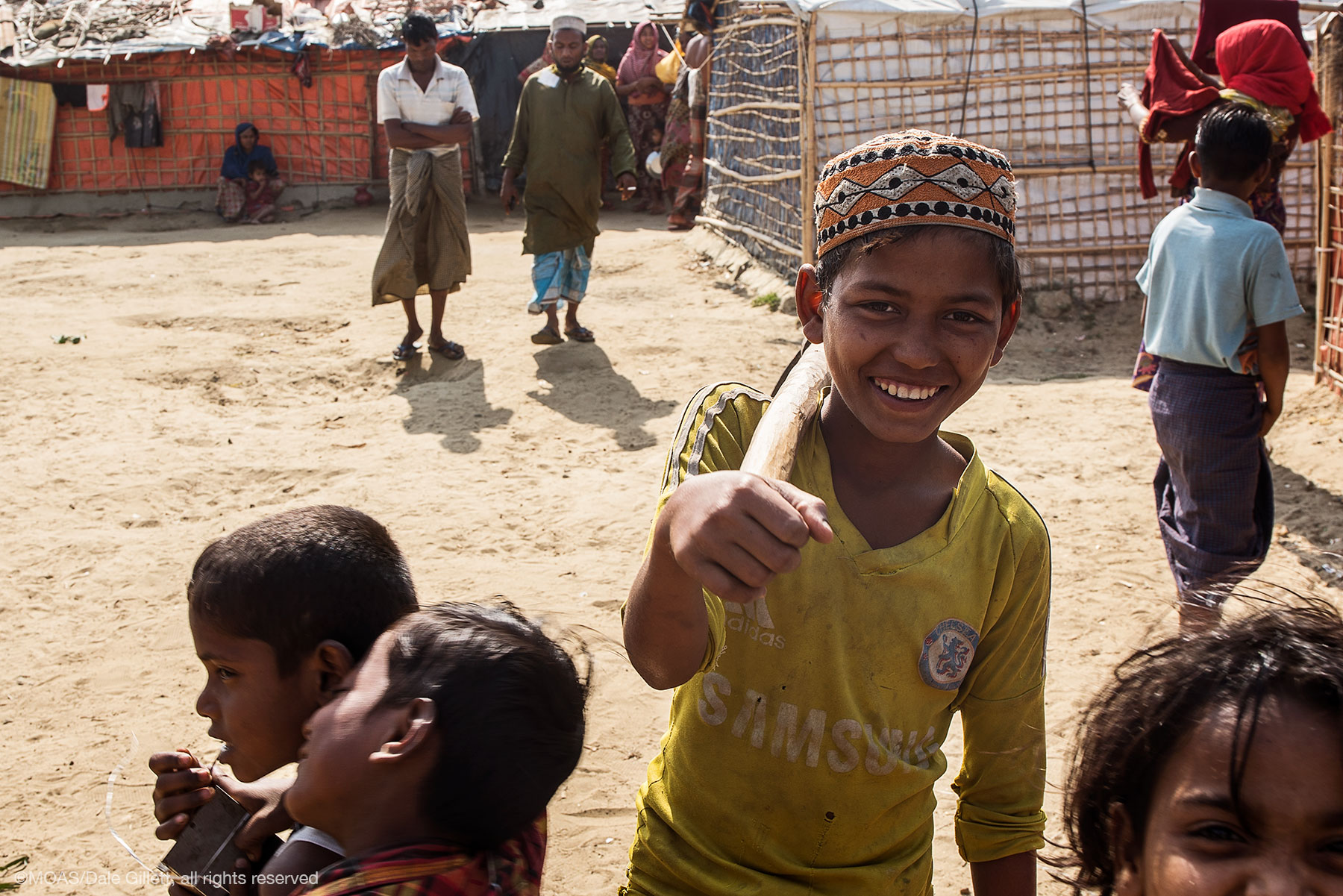 Children often go out to work to help support their families. This young boy was on his way home after a tiring day’s work helping to dig drainage ditches in preparation for monsoon season. 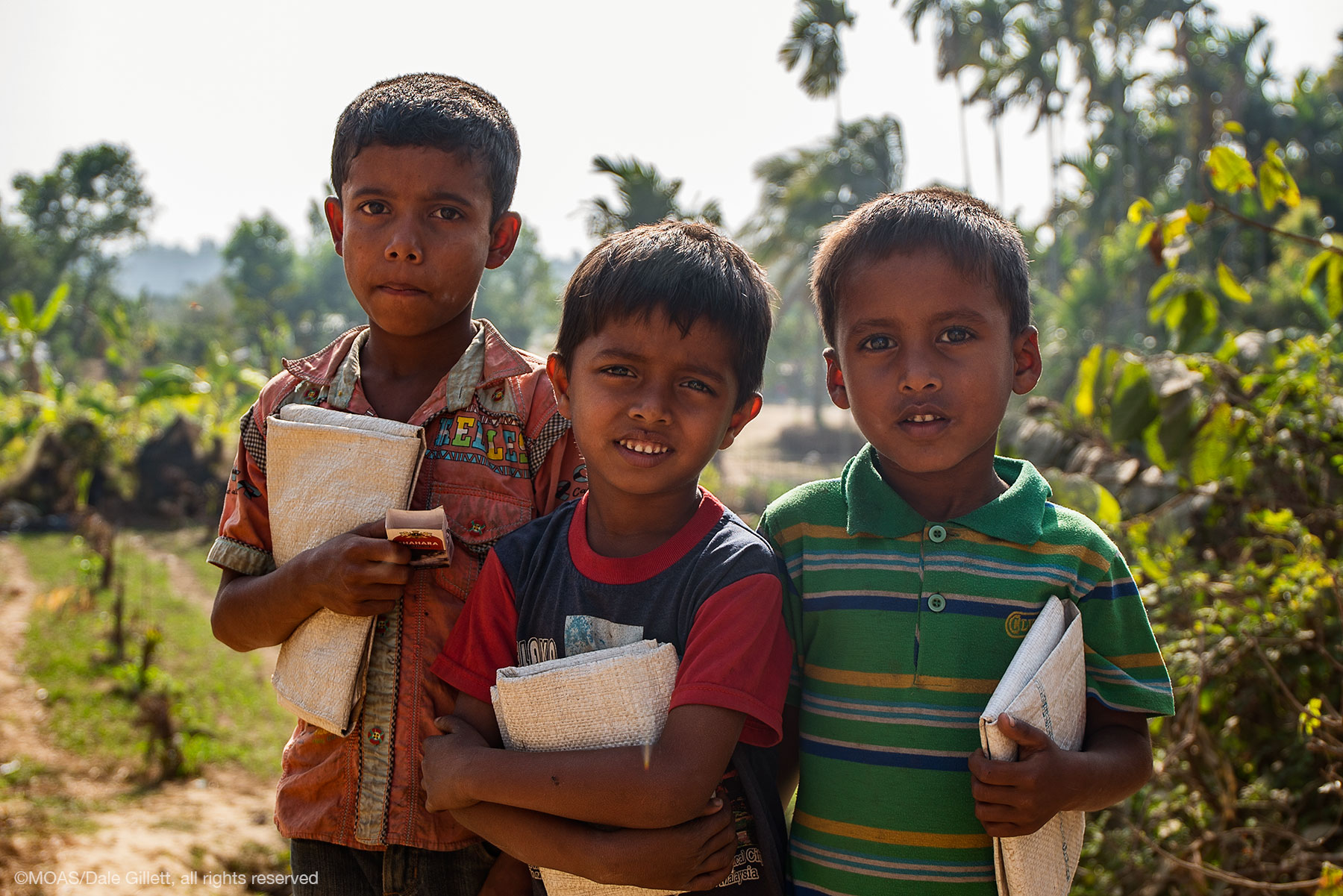 Three young boys pose for a photo on their way home from a Madrasa. Access to education for Rohingya children is still a major problem, with over 230,000 children unable to access schools or learning spaces. 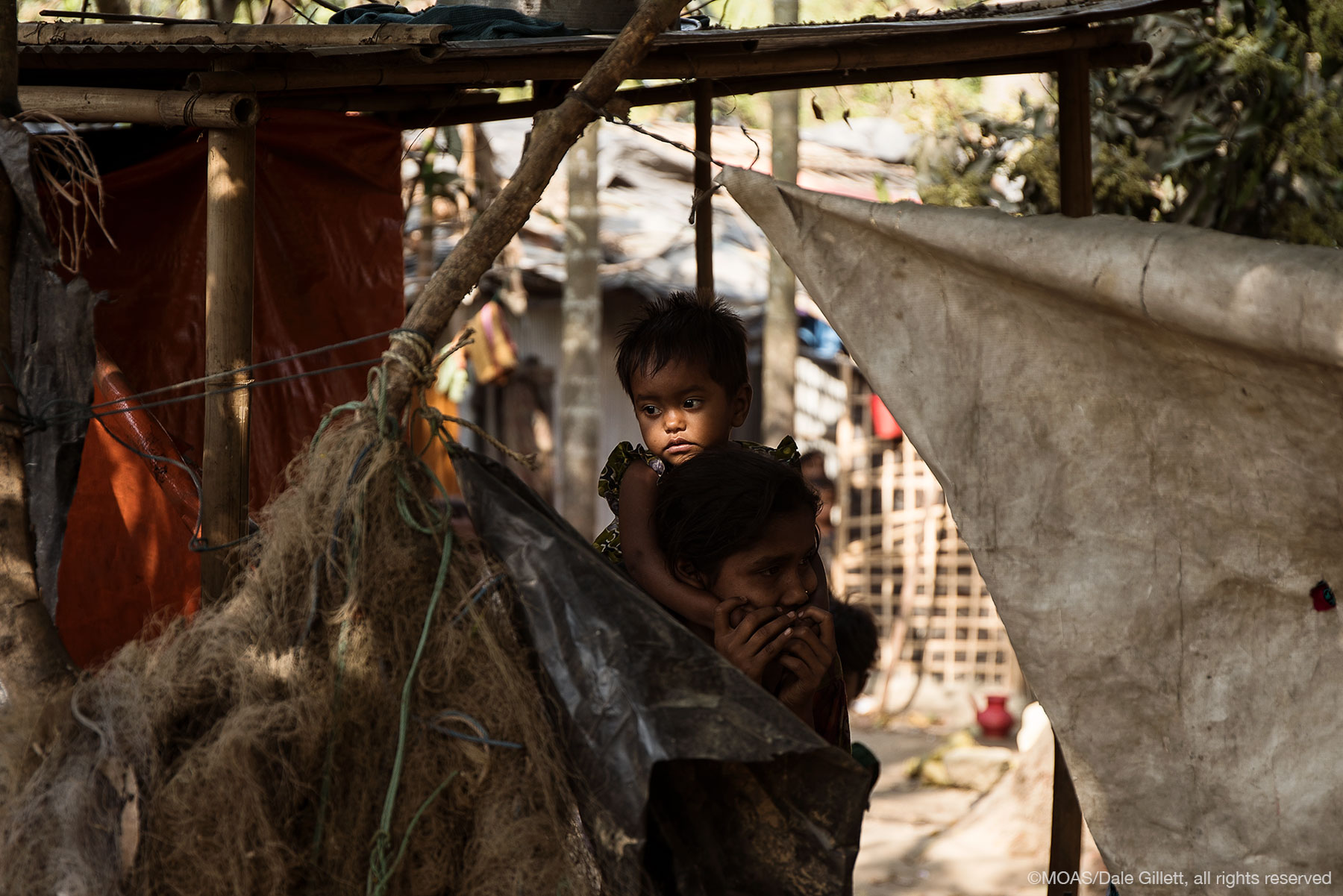 A little girl sits on the shoulders of her female relative in Shamlapur refugee camp. 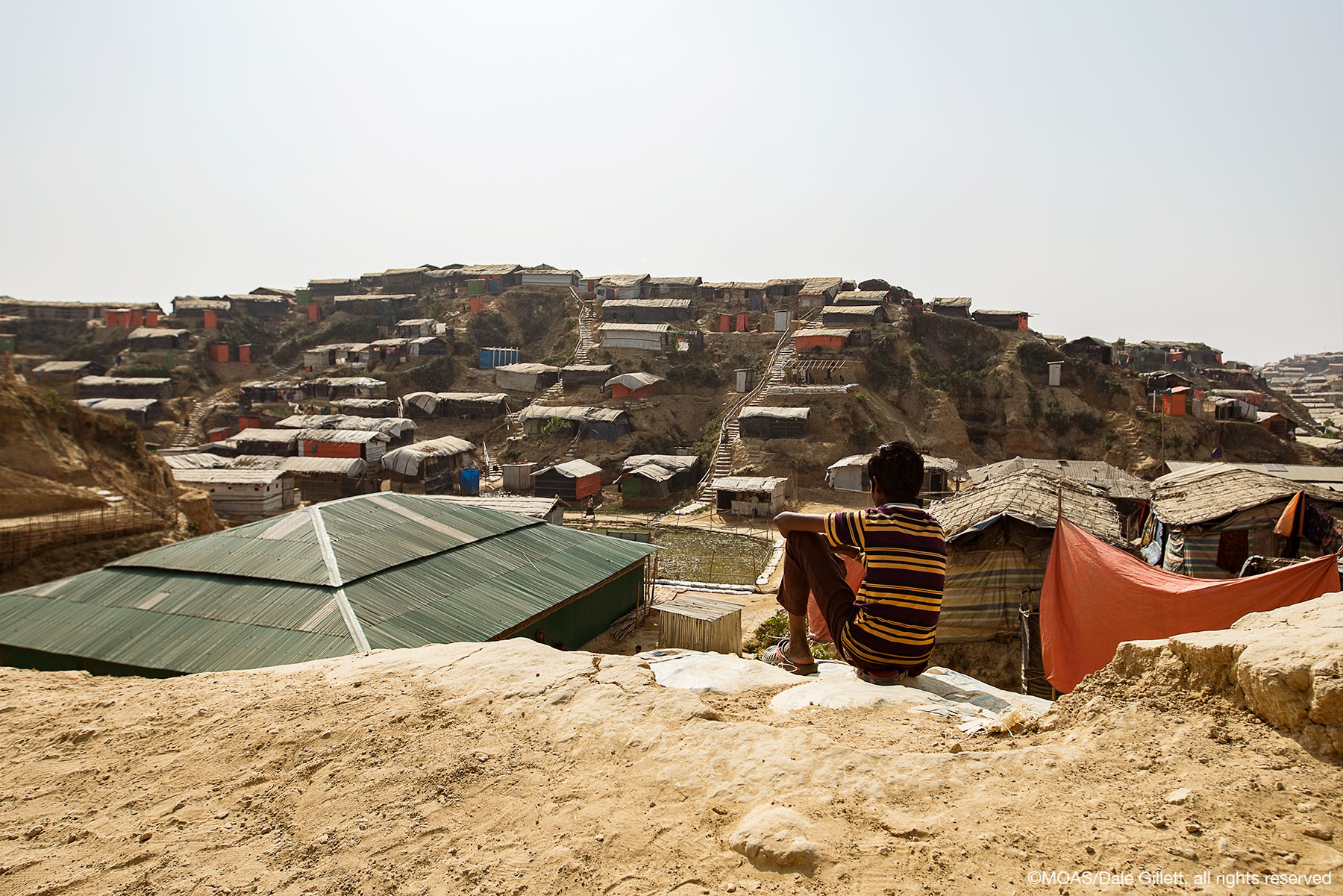 A young boy looks out over a valley in Kutupalong refugee camp. The Kutupalong-Balukhali expansion camp is vast; it is now home to over 540,000 people. 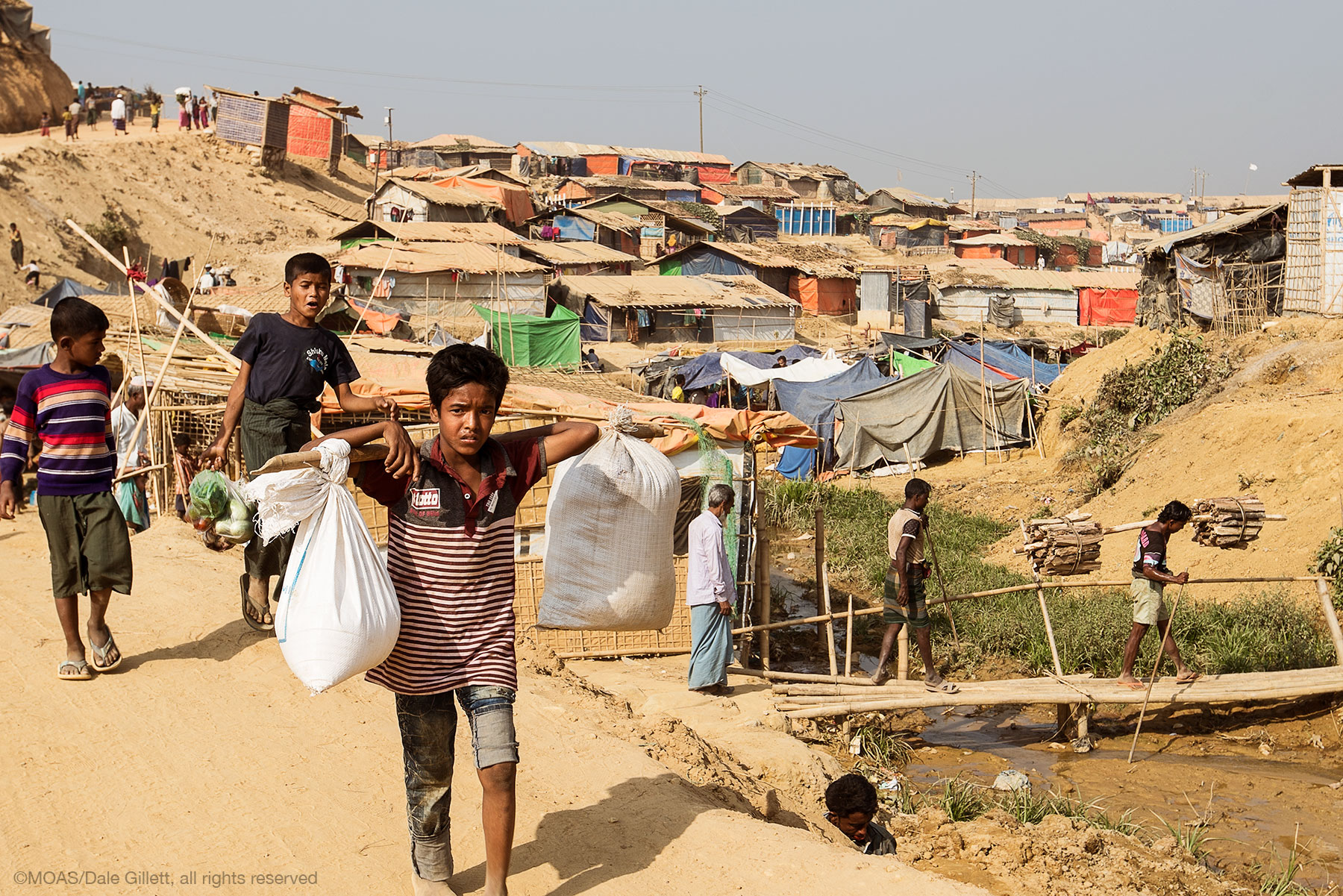 A child carries heavy bags of supplies on his shoulders in Kutupalong. 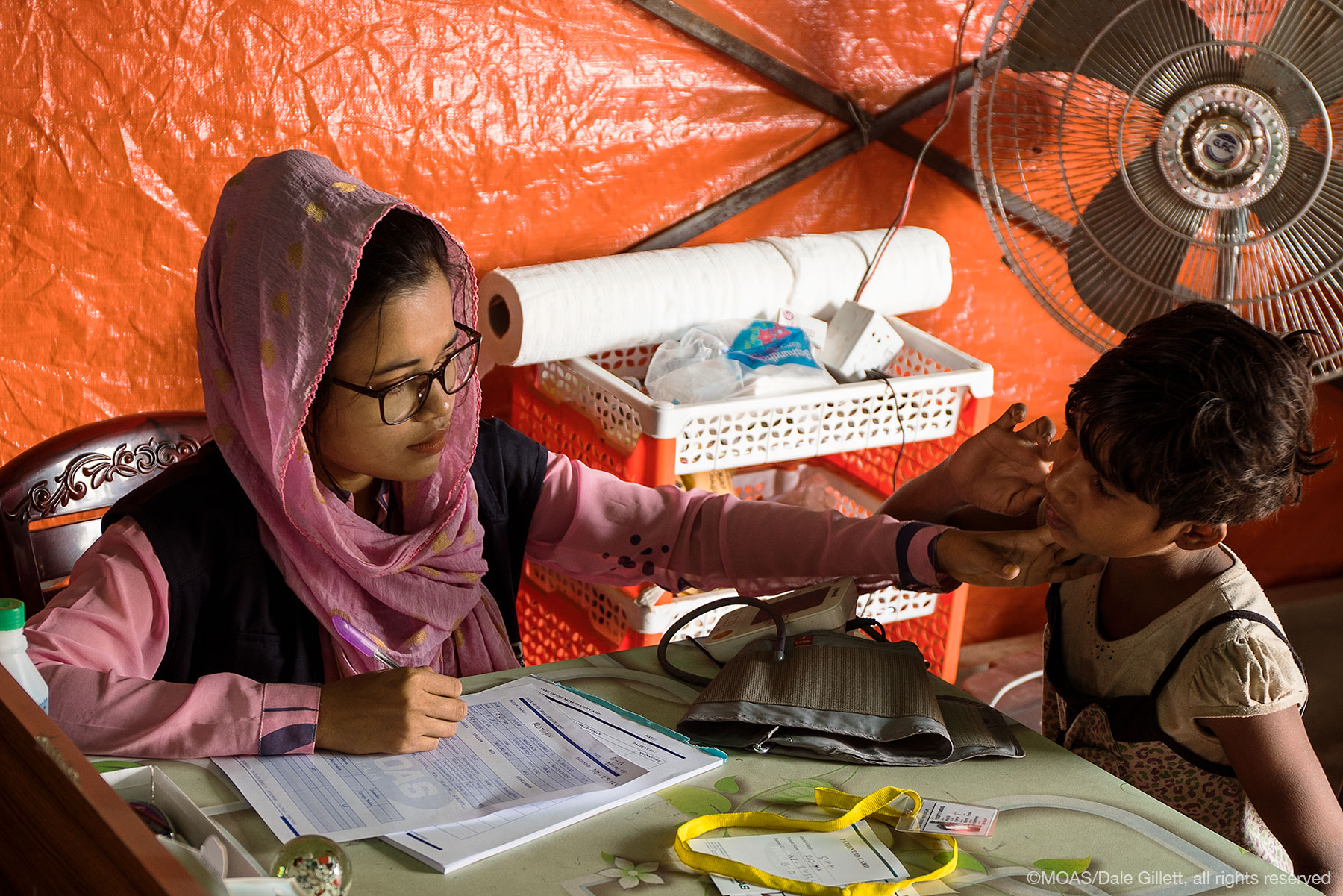 A MOAS team member carries out an initial check-up on a young Rohingya patient with a suspected case of mumps. 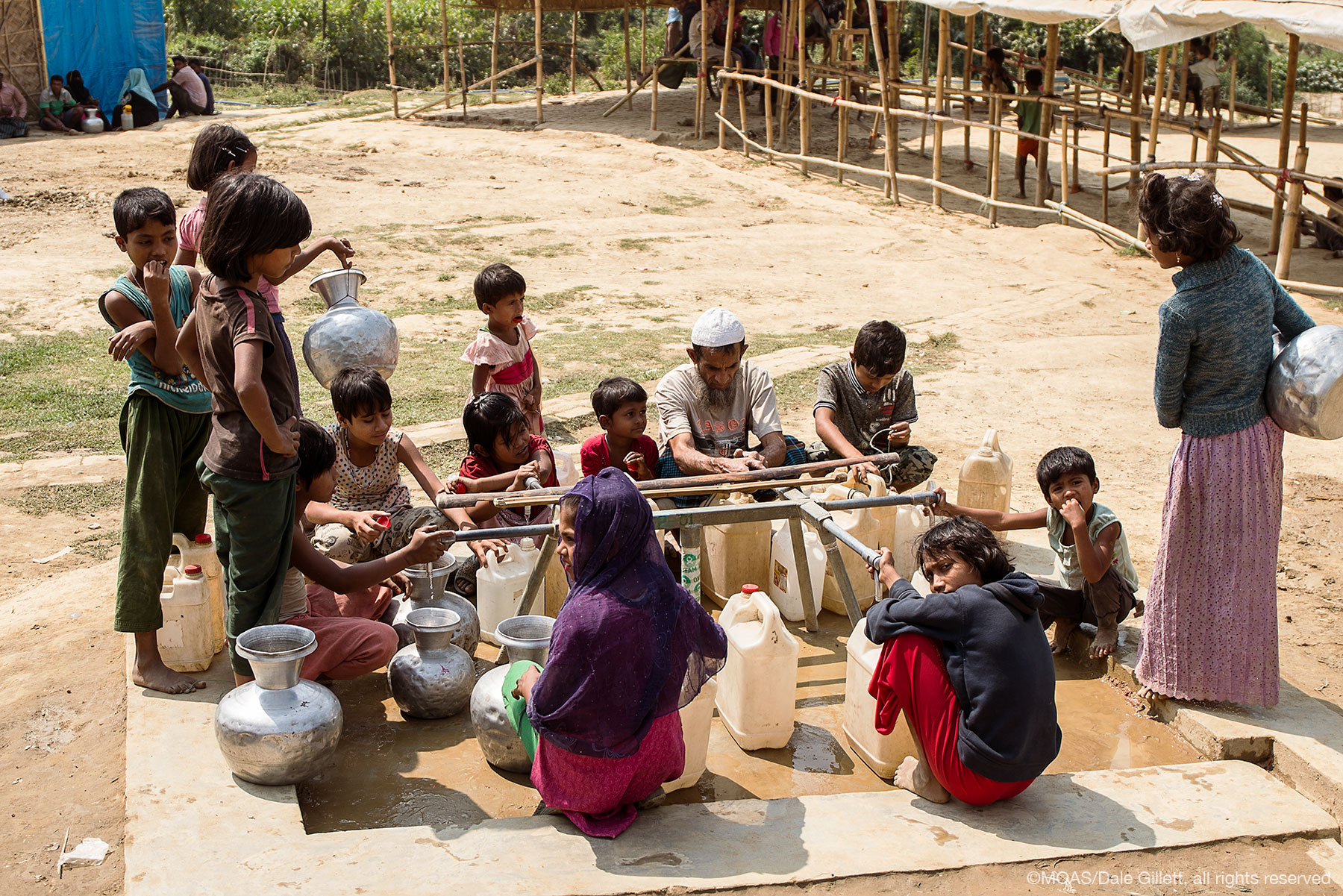 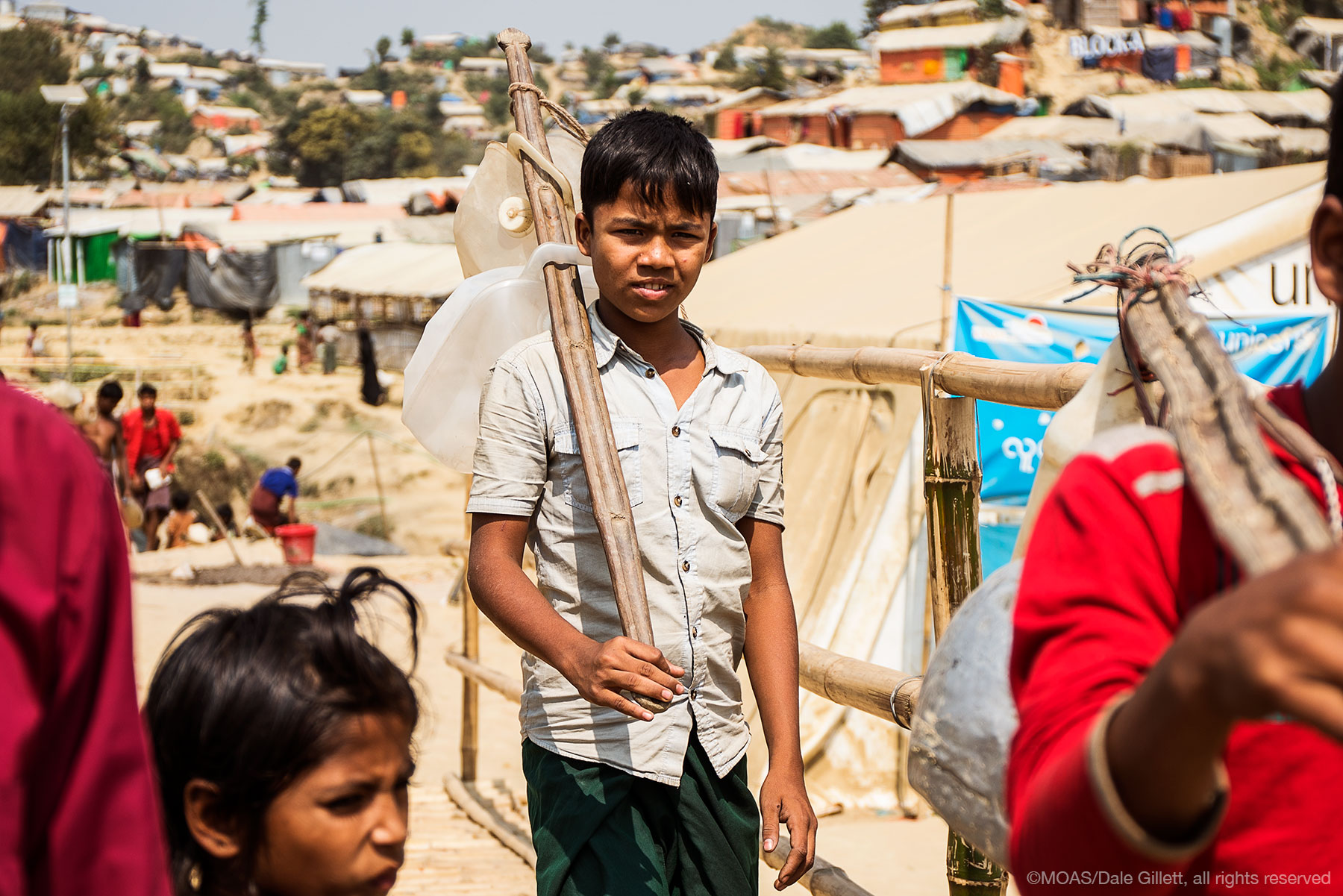 A Rohingya refugee on his way to collect clean water. 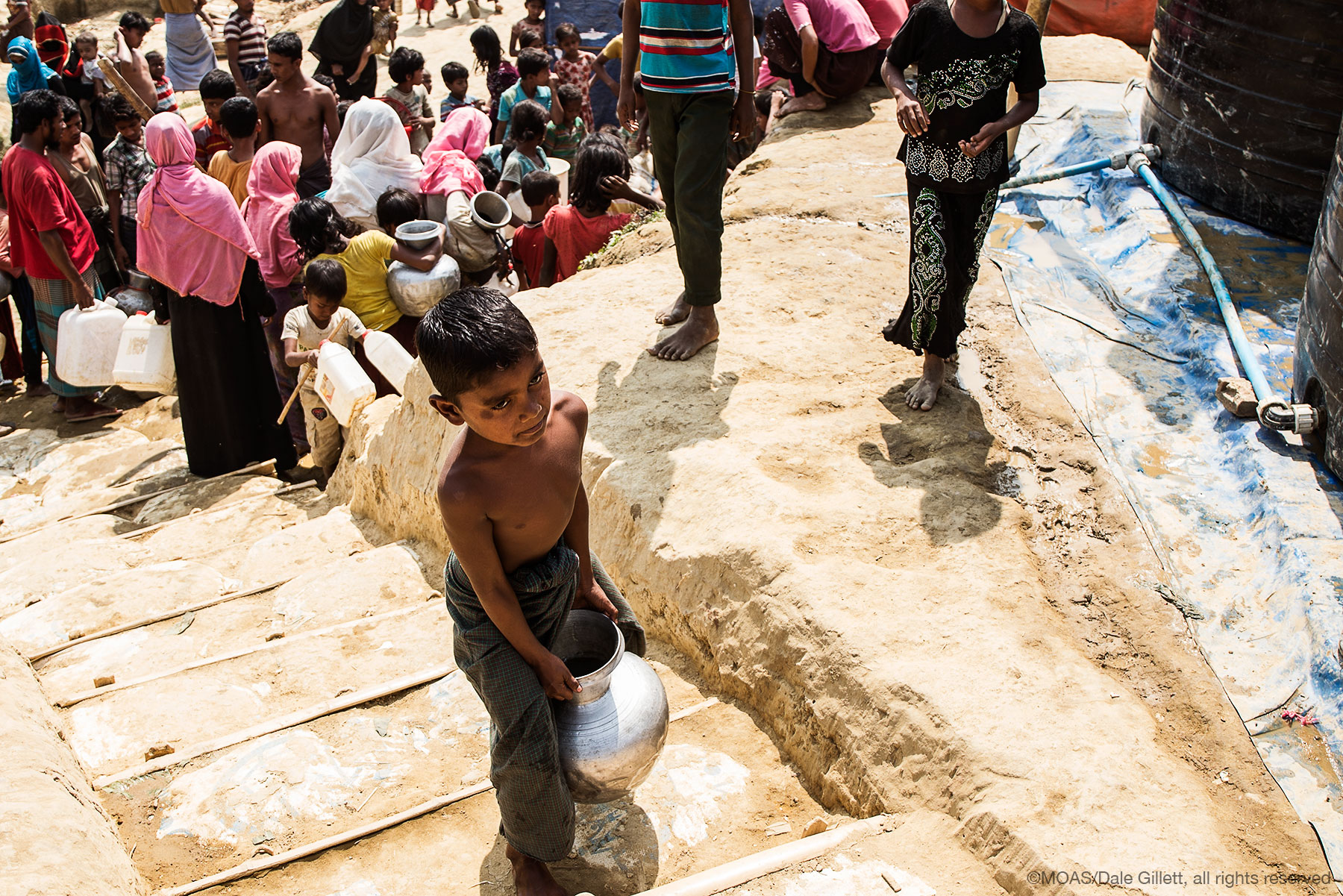 A boy struggles up some steps after collecting water in Unchiprang. 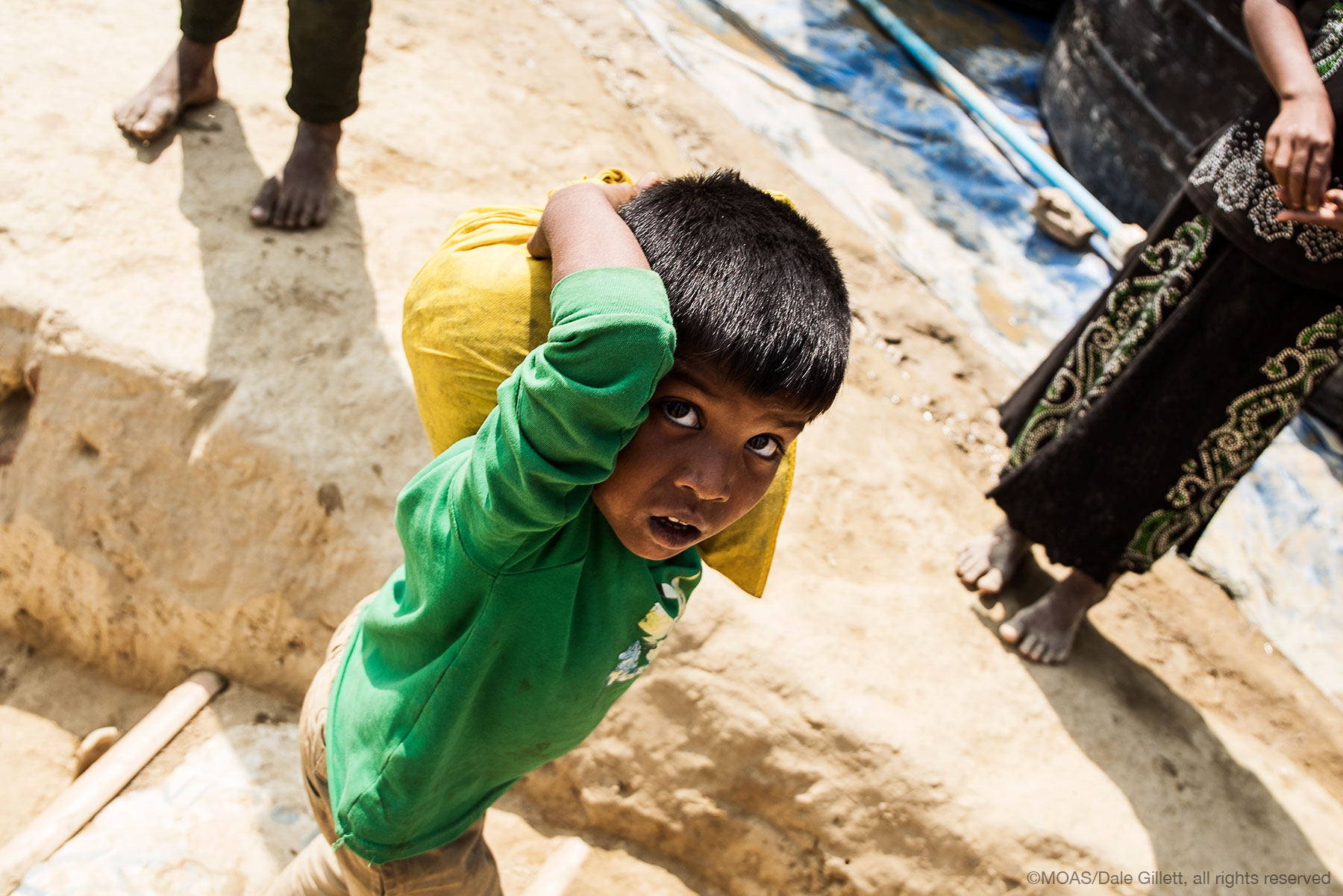 A young boy walks back to his makeshift shelter after collecting some basic rations. 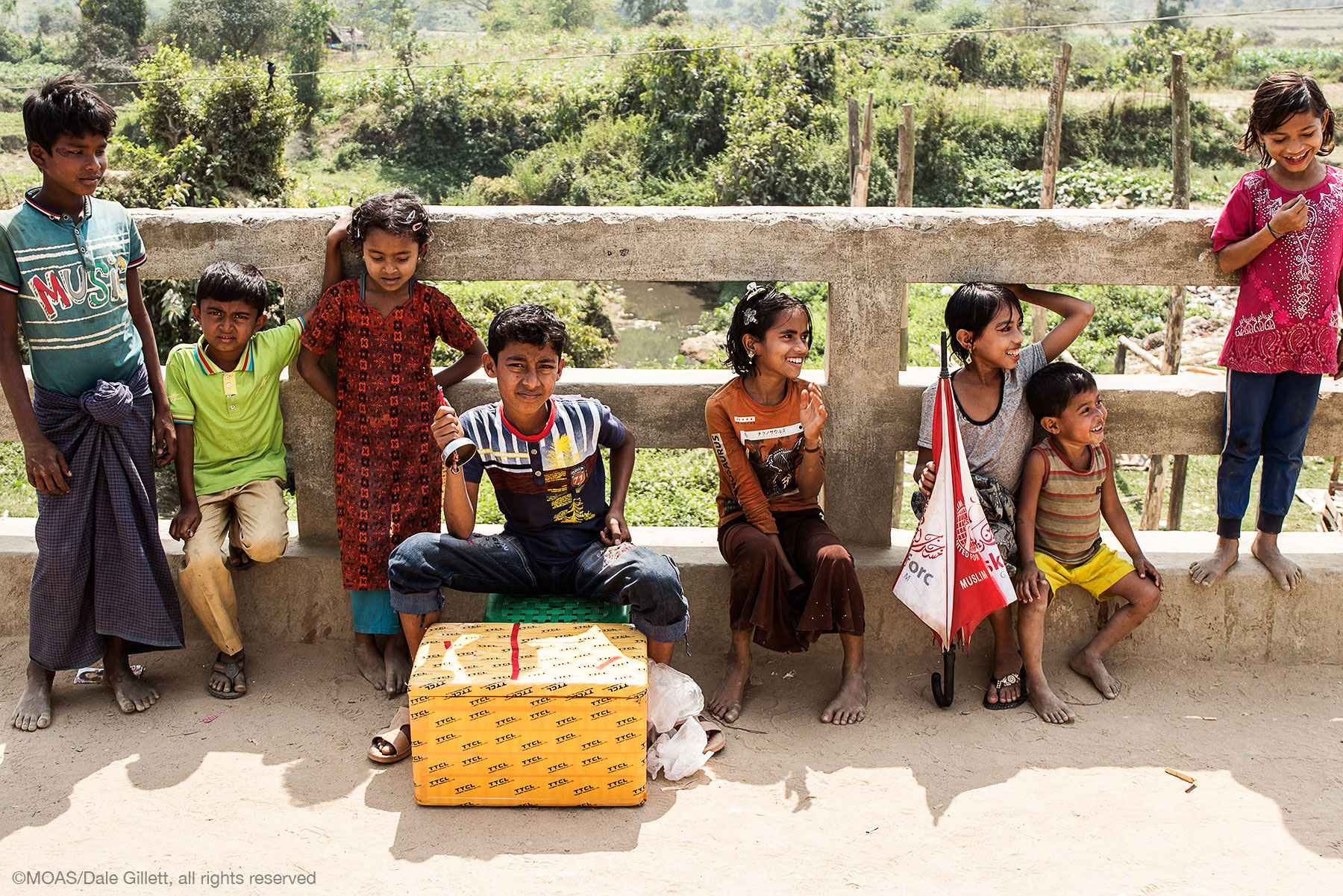 A group of Rohingya children sit on a bridge in Unchiprang refugee camp as one of their friends tries to earn some money. 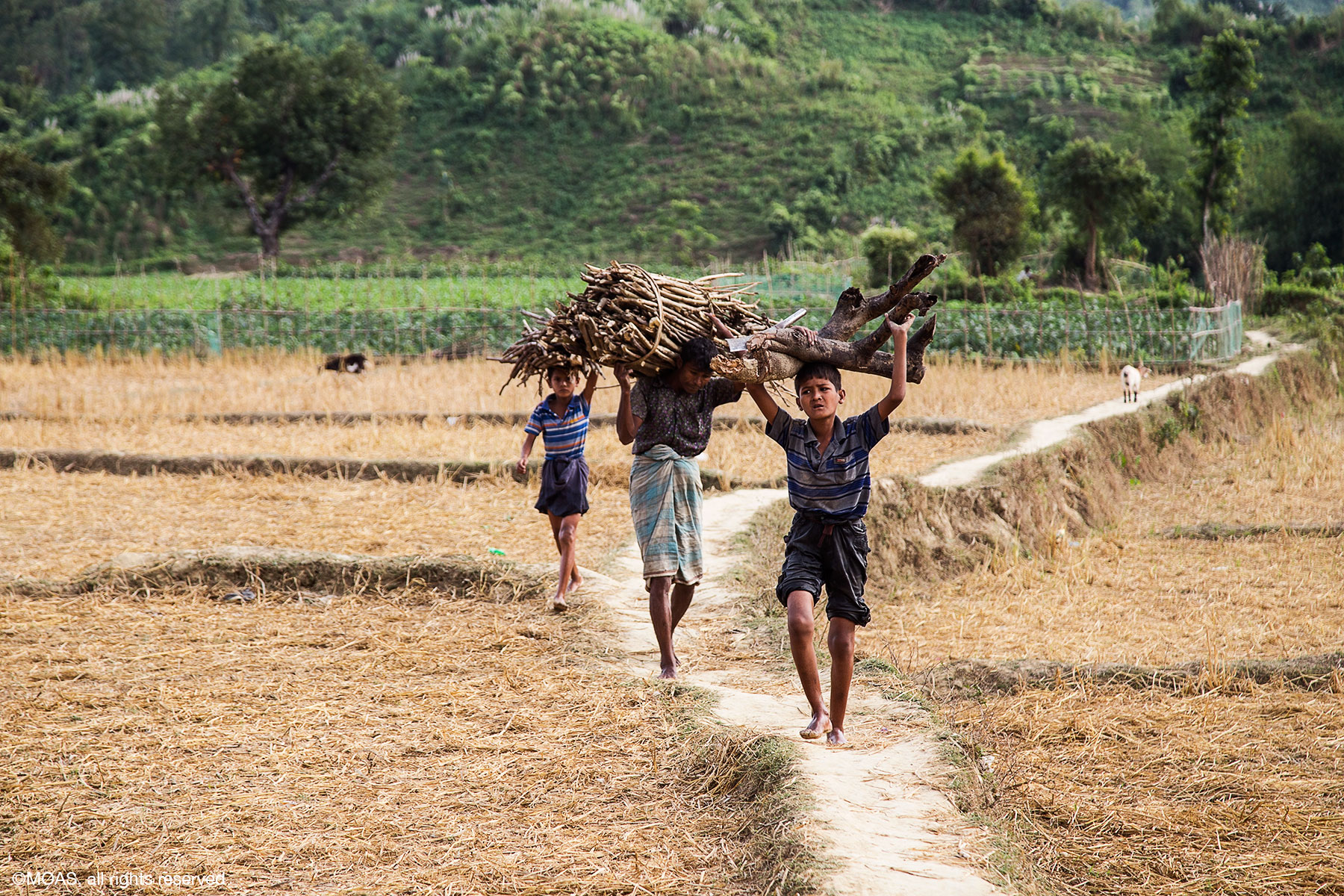 A man and his two sons walk back to Unchiprang after a day of collecting firewood. 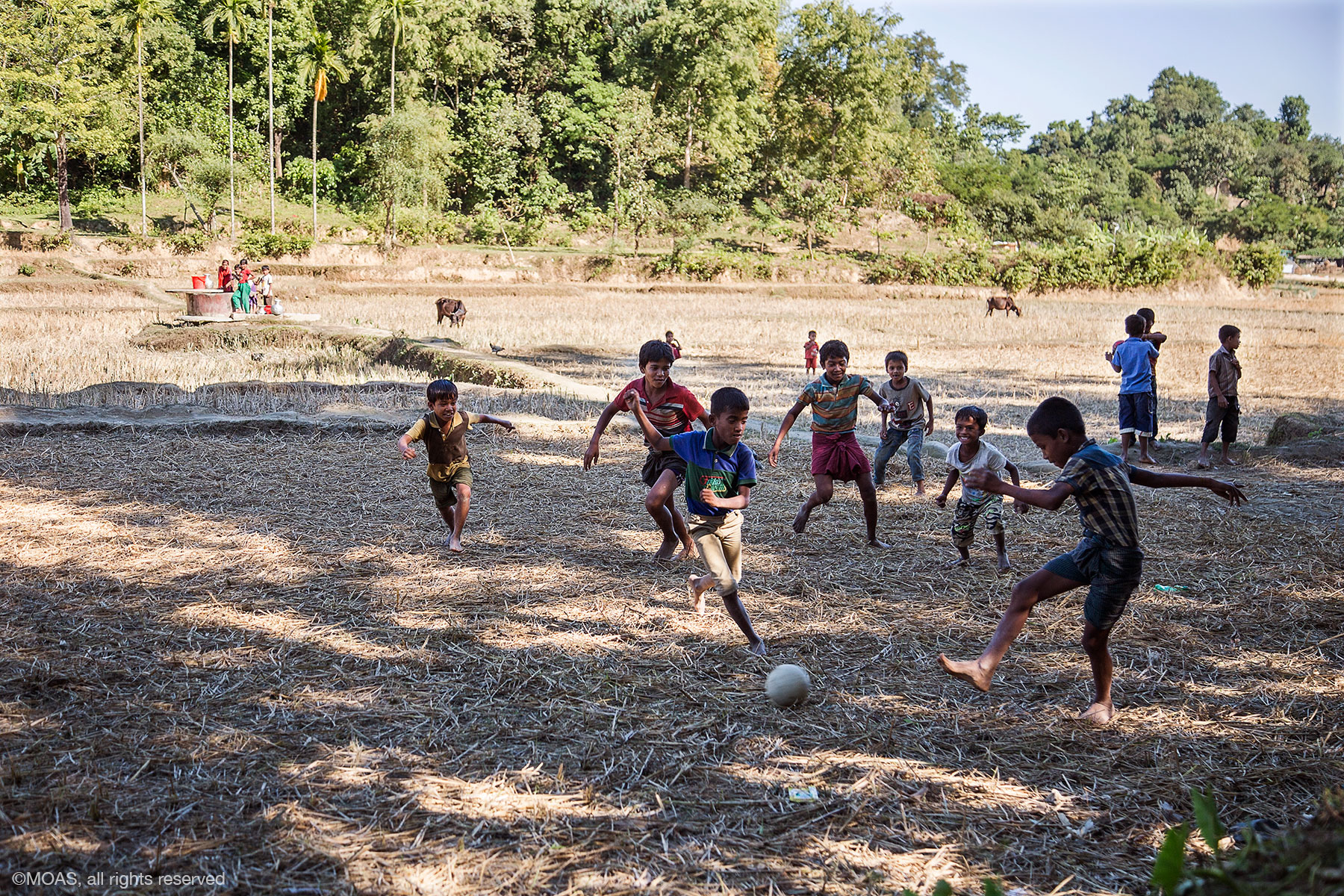 A group of boys play football on a field in Unchiprang.

You can support our work in Bangladesh by donating here, or fundraise with friends to become a part of our activist community. You can also receive regular updates by signing up to our newsletter at the bottom of this page or following us on social media.