Since August 2017, MOAS has been focused on providing humanitarian assistance to the Rohingya refugees who have fled violence and persecution in Myanmar and have entered neighbouring Bangladesh in search of assistance and safety.

When the exodus began in August of 2017, Bangladesh’s Prime Minister, Sheikh Hasina Wazed, opened the borders to allow refugees to reach safety in an act of humanity and brotherhood. Of the 914,678 Rohingya refugees currently being hosted in Bangladesh, 55% are children/minors, while the majority of adults are women; 16% of families are headed by a single female (UNHCR). The biggest refugee camp in Bangladesh, Kutupalong, currently hosts over 620,000 refugees, making it the biggest refugee camp in the world. 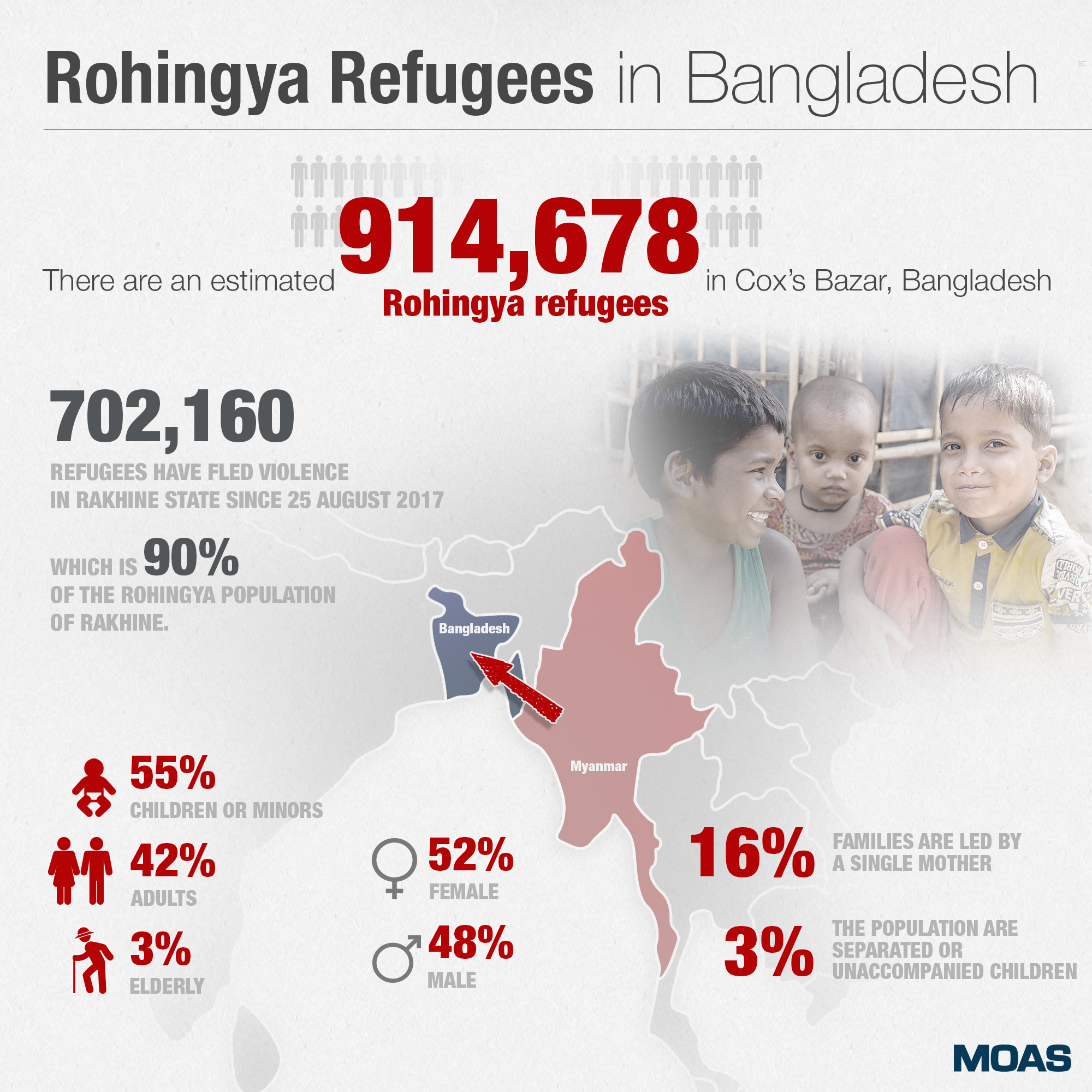 To make the situation yet more challenging, the cyclone and monsoon season has now arrived and the already stretched humanitarian services are being cut off from their target communities by flooding and landslide. The rapid escalation of the crisis and the mass response required have left the international humanitarian community and the supporting NGOs unprepared for the financial burdens now put on them. In March 2018, United Nations agencies and their humanitarian partners appealed jointly for $951 million to meet the ‘urgent needs’ of the community. As of mid-June, only 21% of funding requested has been received, leaving key sectors- such as health and nutrition – sorely under-funded.

So, with such an incredibly vulnerable population, an unprecedented number of refugees, a politically sensitive flashpoint and a joint appeal from the UN and other agencies, why has the Rohingya crisis gone largely underreported by most news houses and media agencies and underfunded by the international community and civil society?

There have been many reasons suggested as to why this issue is struggling to grip the public and engage politicians and media outside of the South East Asian region. Our media, communications and fundraising department at MOAS has come across a few:

The changing political environments in the USA and across Europe have led to significant changes in donor trends and media cycles. The phenomenon known as ‘reactive giving’ has been triggered across many philanthropic communities as protest donations are made to domestic organizations supporting local issues underfunded or opposed by the populist governments of the day. This sees international and overseas giving come second to things like family planning, mental health, LGBTQ support services and so on.

The frequency and severity of environmental disasters in Western states in recent years, such as the California wildfires, the Italian earthquakes and the UK floods, has meant that both national and agency appeal funds for ‘disaster relief’ have been allocated to much- needed domestic crisis response. This has meant that contingency funds and public response to international events (both political and environmental) have been underfunded across the board.

The Asian region appears remote and unconnected to the average person in the most prevalent donor countries. The issue of distance, mixed with a lack of familiarity with the geopolitics of the region beyond major international events, makes complex regional crises, like the Rohingya issue, a challenging one to fully comprehend. The feeling of remoteness is compounded by the immediacy and proximity of other issues. There may also be a feeling that economically and politically strong regional actors (such as Australia and Singapore) will respond to regional crises, thereby discouraging action.

There is a general feeling of fatigue within civil society as social media and modern communications bring issues, both domestic and international, closer than ever. Migration in particular has been a key topic for the last few years, particularly in the USA, Australia and Europe, where the issue has been instrumentalized by politicians, highlighted in the media and flooded funding appeals. This overexposure reduces the impact of each individual campaign and the willingness or ability of the general public to engage in each one.

Who speaks for you?

One of the most delicate issues around the Rohingya crisis is the question of statelessness. With no state awarding citizenship to the Rohingya, there is no single country to which the international community can look for accountability, support and collaboration. The issue affects the durable solutions and sustainable programming being proposed and leaves the community in a kind of limbo. Without a legal acknowledgement of nationality the community is exposed without a clear protector, advocate and representative.

The Rohingya diaspora communities fight this by being incredibly active, legally and socially savvy and engaged with the asylum procedures in host countries and with ongoing responses to the crisis. However, the Rohinya diaspora is smaller in number than most and often struggles with seeing results to their lobbying and advocacy given the current global environment.

WHAT CAN YOU DO?

In light of the above challenges, what can you do to support MOAS in our mission to raise awareness of the Rohingya crisis, advocate for clear management strategies for the months ahead and raise funds for the ongoing services we provide in Bangladesh?

This Refugee Day we celebrate the resilience and strength of those displaced by asking our community to engage in simple acts with a big impact to support refugees around the world. Here are a few #SimpleActs you can do to champion the cause and participate in our campaigns.

Engage with the Diaspora

Help magnify the voices of the community, either by engaging with your local Rohingya community group or one of the many Human Rights / Advocacy agencies struggling to spread the message. Attend gatherings, engage with campaigns or offer your time and services to make an impact.

Share news on the Rohingya crisis with your own community. Look out for coverage on the traditional media as well as activists on social media. We recommend signing up to MOAS’ newsletter (at the bottom of this page) and sharing our blogs and podcasts to help us share the stories of the families we help on a daily basis.

If you are interested in a specific aspect of this crisis, the scale, the demographics, what it means to be stateless, the future of this community, or the history of the Rohingya, use your own talents to illustrate this and tag us on Twitter (@moas_eu), Facebook (@migrantoffshoreaidstation) or Instagram (@moas_eu) using #SimpleActs, or write to us at info@moas.eu. Create a sketch, poem, blog or photo and help us advocate in a more creative way.

Donate what you can

Finally, please don’t assume that costs are being covered by governments or international agencies. If you feel motivated to make a difference and to support MOAS in our attempts to maintain service delivery throughout the monsoon season, please donate whatever you can to our ongoing appeal at www.moas.eu/donate or email our team on info@moas.eu to find out more.