Nayapara Registered Refugee Camp, like all the camps in Cox’s Bazar, has been inundated by monsoon storms in the last month. Heavy rains have caused the water levels to rise dramatically in the streams, pools and reservoirs in the camps. Children are particularly at risk, given the almost total absence of safe places to play, and the irresistible attraction of pools in the hot, humid weather.

The flood and water safety training that has been delivered by the MOAS team to Rohingya participants from many of the camps, has built a strong network of community safety volunteer teams, able to act as emergency first responders in the event of a flood or water related emergency. Given that children are constantly playing in the water and that the majority of them are not able to swim, it was suggested by MOAS that a pro-active approach to water safety be taken, with community safety volunteers patrolling popular open water areas. 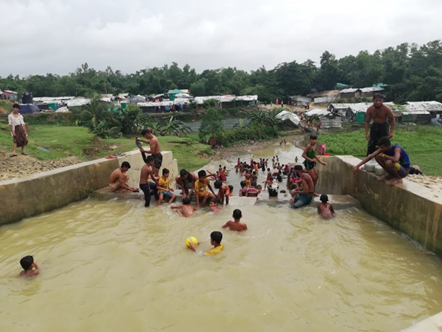 They had not been there long when Mohammed Rofique noticed a boy about 25 meters out, away from the other children shouting and playing in the shallows. He appeared to be in distress and was having trouble keeping his head above the water. Rofique raised the alarm and with the help of fellow volunteers, they deployed a MOAS throw bag, which reached the boy on the first try and using the throw bag and a makeshift floatation device, the team were able to quickly pull him to safety.

The boy that the team rescued, 14-year-old Mohammed Nur, had been playing football with his friends and had jumped into the pool to wash off the mud from the game. However, the water was deeper than he had thought and he was quickly out of his depth. Unable to swim, Mohammed had been on the verge of drowning, before the community safety team saved him. Once safe on the bank, the team helped him to cough up water before handing him over to his mother, who took him straight to a medical centre for a check up

The skills that the water safety training has given Rohingya volunteers made the difference between life and death that day. Without the presence of the safety team, there would have been another tragedy in the camps, another preventable death.

An after-action review with MOAS team leaders identified additional resources that could be developed to help the safety teams perform their roles. Having bamboo ladders available near pools and reservoirs to help people climb or be helped up the steep banks more easily and keeping floatation devices near open water sources, would further support successful water rescues. Work will continue throughout the monsoon season and beyond to help improve water safety in the camps.

MOAS would like to take this opportunity to thank all the Rohingya Safety Volunteers for their commitment in supporting the camp communities and ensuring their safety during the monsoon season. 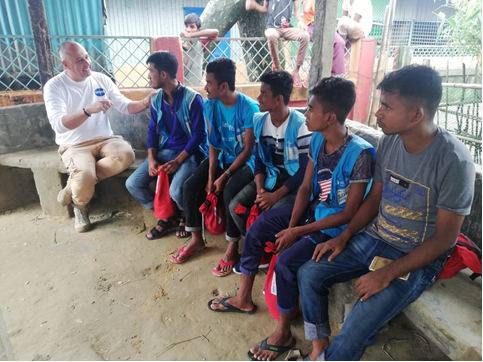