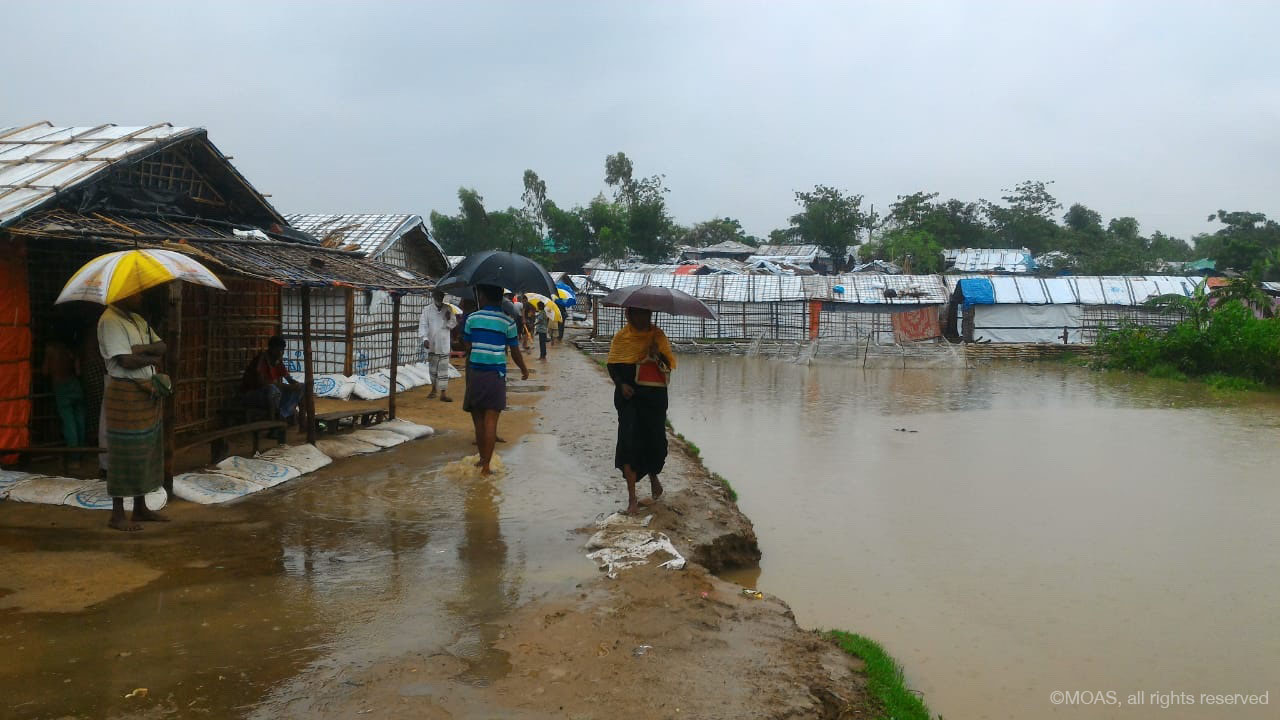 Monsoon season has arrived in Bangladesh, bringing huge risks to the Rohingya refugees living in overcrowded camps in the Cox’s Bazar region. In early June, the ISCG, which is responsible for overseeing the humanitarian response in Bangladesh, recognised that the window for risk mitigation had ‘all but closed’. What now faces those seeking safety in the region, and what is MOAS doing in response?

Every year between June and November, Bangladesh faces a monsoon season that brings severe flooding, flash flooding, water-logging and wind damage, causing devastation to communities throughout the country. This year, the presence of over 900,000 Rohingya refugees living in makeshift settlements has only compounded the danger the monsoon season brings, particularly during the months of June, July and August, when the risk of landslides and flash floods is at its highest.

In March of this year, the ISCG identified over 215,000 Rohingya refugees living in areas at serious risk of landslide and flooding; as of the 24th June, 33,000 people have now been relocated within existing camps, in community shelters, or in newly-created relocation sites (ISCG). A further 3,000 people are to be relocated by mid-July, although worsening conditions mean any further relocations are unlikely.

Beyond relocations, options for short-term evacuation are extremely limited. The lack of available cyclone shelters means that the entire refugee population in Cox’s Bazar does not have access to structures that are safe in high winds. This has meant that humanitarian agencies have focused on supporting refugee households in reinforcing their existing shelters; over 190,000 shelters have been upgraded with bamboo, tarps, wire and rope. Meanwhile, efforts continue to strengthen key infrastructure – such as access roads and bridges – and community facilities to ensure that people are within reach of the help they need. 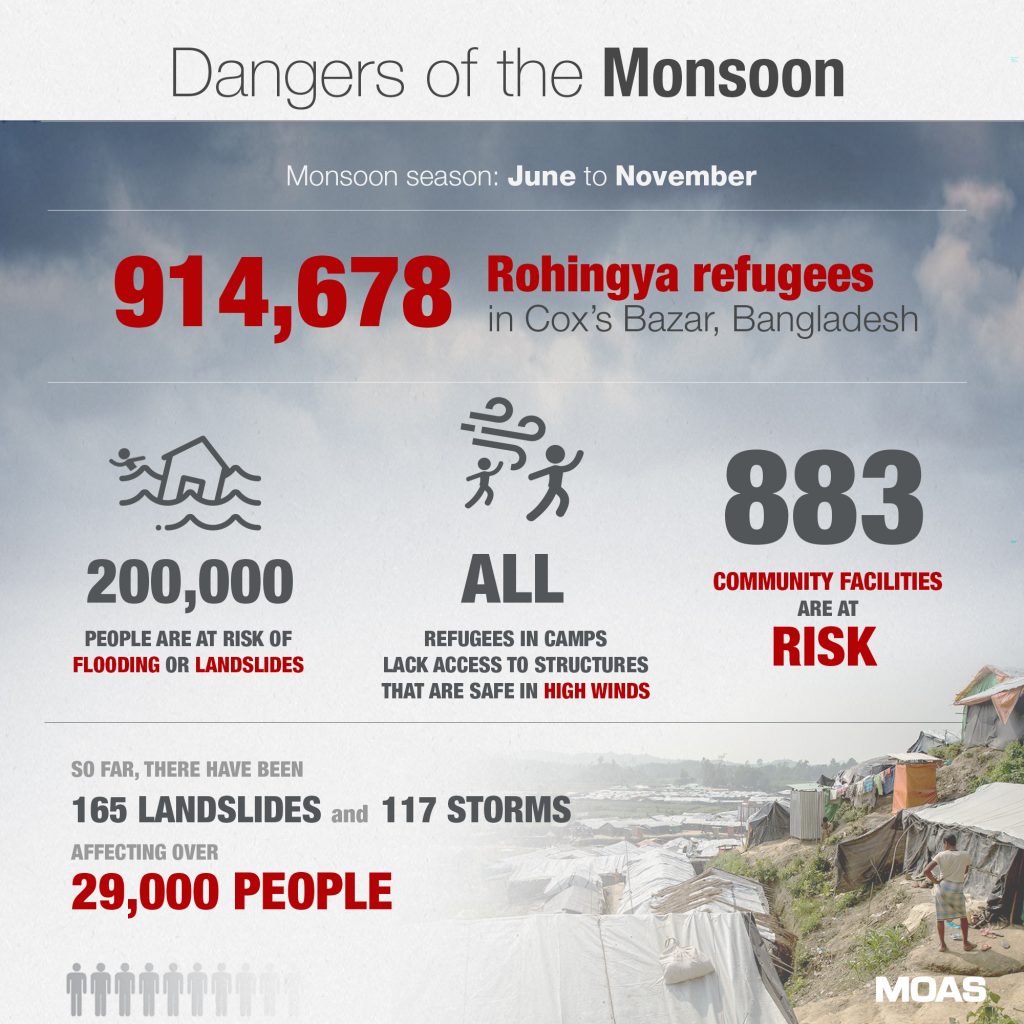 Despite these efforts, since the first heavy rains arrived on 11th May 2018, over 29,500 people have been affected by landslides, storms, flooding and fires. Of those people, 2,894 people have been displaced, while 33 people have been injured and 1 person killed (ISCG). Community facilities, including latrines, water points, learning centres, and nutrition facilities have been damaged, while 1,090 shelters have been completely destroyed and are currently being rebuilt.

The Situation in Shamlapur and Unchiprang
The inhabitants of the refugee settlements served by MOAS’ two Aid Stations are facing specific dangers and challenges. Shamlapur, a busy fishing village with a local Bangladeshi population of 30,000 and a refugee population of 13,000, is extremely vulnerable to flooding and storm surges. Due to the village’s position on a tidal estuary, hundreds of shelters flood rapidly when heavy rains coincide with high tides, causing huge problems of access and flooding to the nearby sanitation and water facilities. 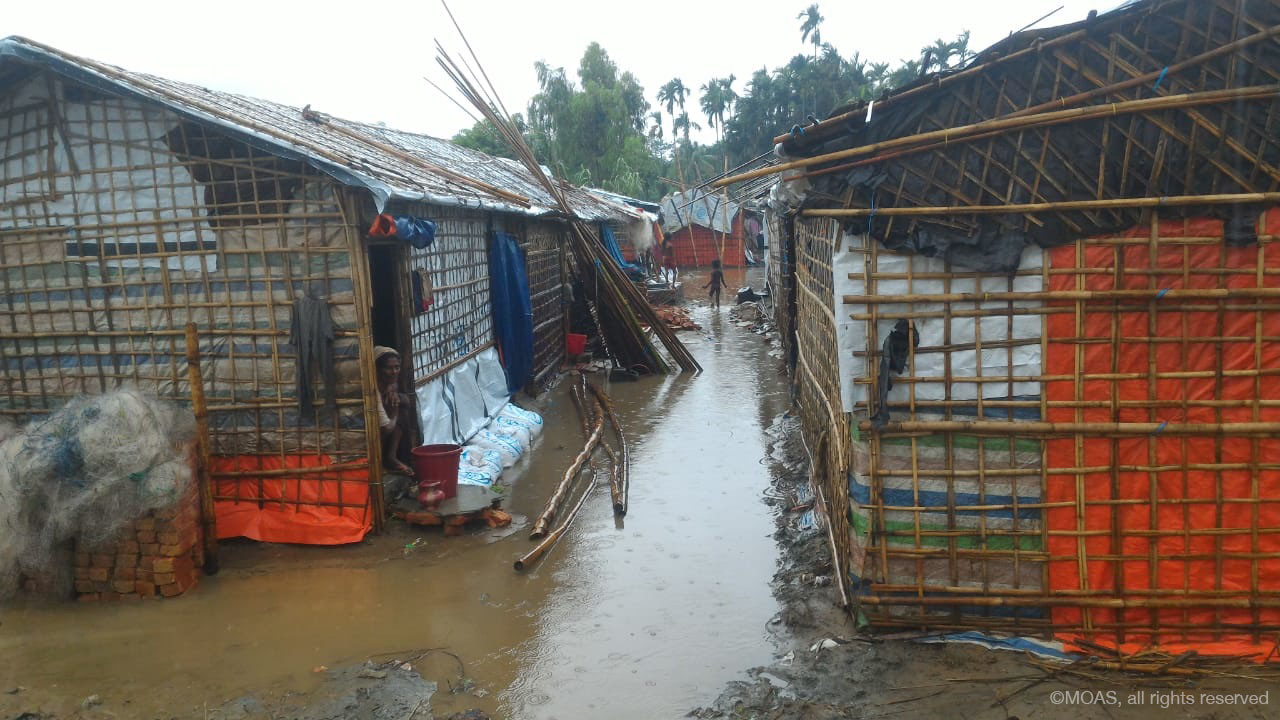 Unchiprang, with its extremely hilly terrain and isolated position, is extremely vulnerable to landslides, thanks in part to continued deforestation. The main canal which runs throughout the camp is expected to soon burst its banks, causing a huge health risk to camp inhabitants as contaminated water threatens to flood shelters. Unchiprang has already experienced several storms which have brought lightning strikes and caused flooding and landslides; all of which are only expected to worsen over the coming months.

Across Cox’s Bazar, the arrival of heavy rains are significantly reducing communities’ access to basic services, degrading living conditions and increasing risks of water and vector-borne outbreaks. Health facilities have been affected by the downpours, with some sites being forced to shut temporarily because of flooding or infrastructural damage. MOAS has already seen a significant increase in the incidence of Acute Watery Diarrhoea among our beneficiaries in Unchiprang and Shamlapur, reflecting the increased risk of the spread of communicable and water-borne disease.

MOAS’ Response
Over the past months, our team has been working hard to prepare our two Aid Stations to withstand the pressures the monsoon brings, reinforcing the health centre structures and ensuring we have the equipment and medicines necessary to treat an increased number of patients. Our team have been part of a Health Sector-wide programme to vaccinate against cholera, while our ambulances are ready to be deployed to reach those in need.

MOAS has also created mobile medical units through which our team are able to provide rapid response medical care to people affected by landslide and flooding. The team has received Flood Safety and Flood Rescue training, allowing them to cross areas of flooded ground and, if necessary, recover and move people to the MOAS Aid Stations in Unchiprang and Shamlapur for further treatment.

You can support our work in Bangladesh by donating here, or fundraise with friends to become a part of our activist community. You can also receive regular updates by signing up to our newsletter at the bottom of this page or following us on social media.