Humanitarian Emergency in Bangladesh: Impressions from a MOAS field visit 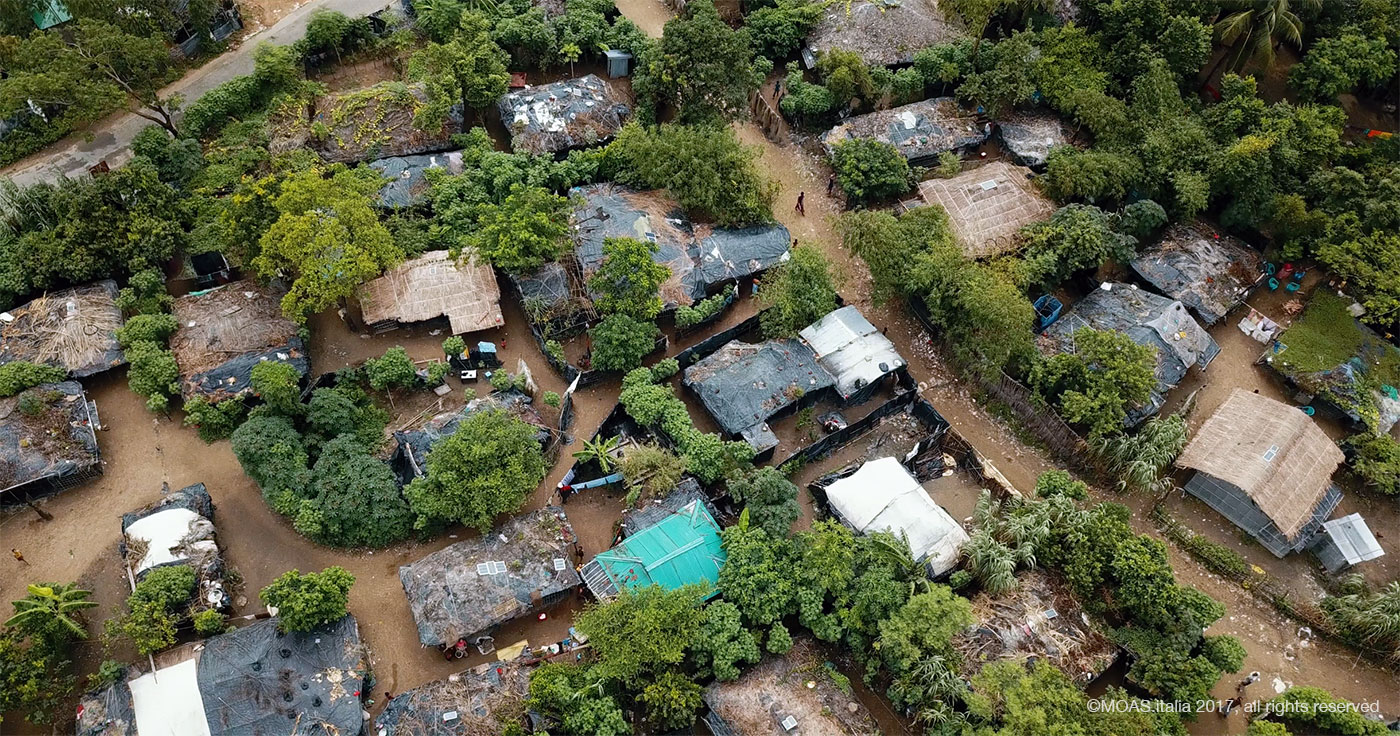 On Tuesday 10th of October 2017, MOAS Co-Founder and Director Regina Catrambone arrived in Bangladesh on a field visit. The aim was to see the progress of MOAS’ humanitarian mission to provide aid and medical relief to the Rohingya refugees that have been arriving in huge numbers across the border from Myanmar since the 25th of August 2017.

Regina’s time in Bangladesh included visits to the makeshift camps and settlements that have been established along the Myanmar/Bangladesh border in the Cox’s Bazar area, several diplomatic visits in the capital of Dhaka, and her attendance at the launch of the first MOAS Aid Station in the fishing community of Shamlapur. Here, we bear witness to the conditions Regina found on her travels throughout Cox’s Bazar.

Over the past two months, in excess of 600,000 Rohingya people have crossed the Bangladeshi border, which has been opened by the Prime Minister Sheikh Hasina in a demonstration of humanity and grace. They have joined an existing population of Rohingya who had previously settled in the region following two major exoduses in the 1970s and 1990s. The many refugee camps across the Cox’s Bazar region now play host to an estimated 800,000-1,000,000 people, at conservative estimates.

The needs of the community range from medical care and food aid to psycho-social support and rehabilitation. The rapid growth of the camps and the logistical challenges of the terrain mean that providing services to those in need has been challenging for the international community on a variety of levels.

The field visit began with time spent in the fishing village of Shamlapur, a small community on the shores of the Bay of Bengal, which has recently opened its doors to arriving refugees. The distance from the main camps and relatively restricted numbers here has meant that limited aid has been directed to this area, and MOAS immediately identified an opportunity to provide much needed services to this isolated community. It is in Shamlapur that MOAS decided to establish its first Aid Station. 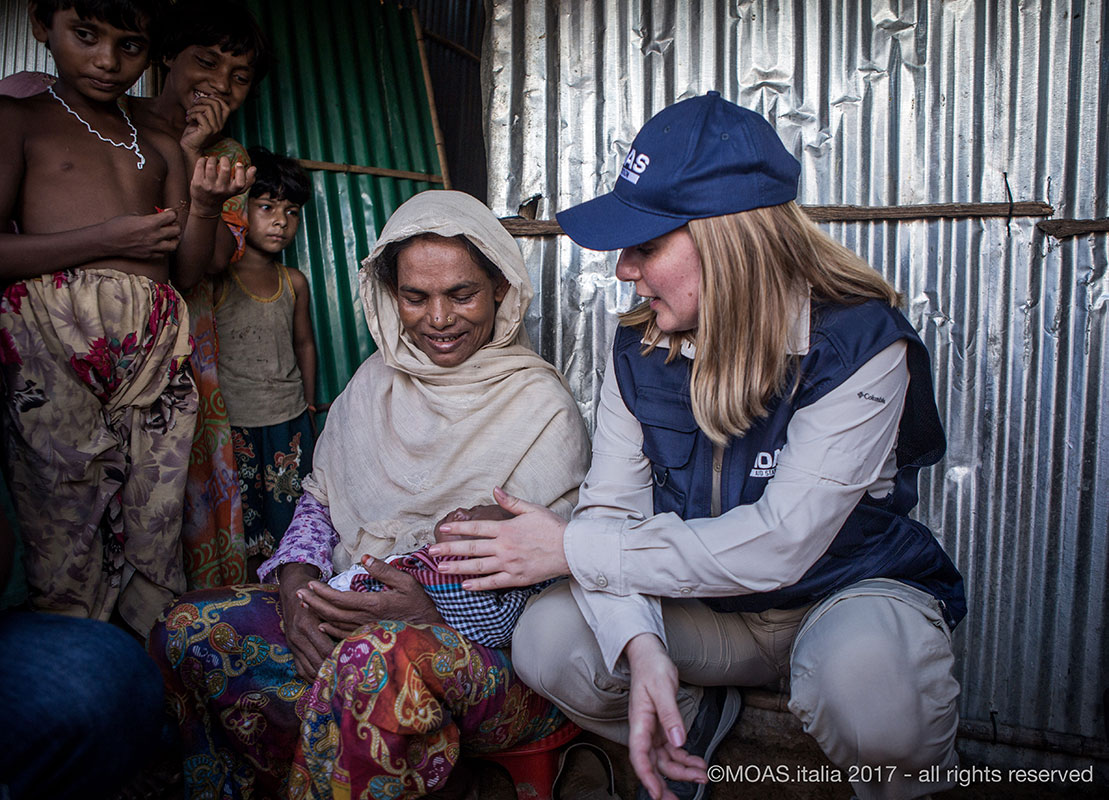 Following the time spent in Shamlapur, the team also headed out into other nearby settlements to assess the conditions and needs within different communities. A trip to Unchiprang, where approximately 40,000 people have settled, drove home to MOAS the need for medical service provision. Specially designed paediatric and maternal health services are especially needed to protect those most vulnerable to disease and malnutrition: the many children who make up over 60% of this refugee population, and their mothers, many of whom are pregnant or still breastfeeding. Unchiprang has been shortlisted as a potential site for the second Aid Station, due to open in the coming weeks.

Having seen the conditions in Unchiprang, where cramped conditions, a lack of proper sewage disposal, and geographical placement in the basin of a valley meant that sanitation and communicable disease were the primary risks, Regina then headed further east, toward the border where the largest camps lie. Kutupalong, the oldest of the camps having been established in 1978, is home to Rohingya from all three exoduses living side by side. Now the biggest of the registered settlements with several hundred thousand inhabitants, Kutupalong has sprawled so far south that it meets the second-largest settlement of Balukhali, an unregistered camp that just a matter of weeks ago was jungle. It has now been rapidly transformed into a far-reaching tent city.

These two camps together draw the most of the humanitarian aid being funnelled into Bangladesh by the international community, as well as being the focal point for Bangladeshi national strategy. However, the scale of the crisis now makes systematic and pervasive service provision throughout the settlements uniquely challenging. The expansion from tens of thousands to hundreds of thousands of residents in weeks means infrastructure and service access has not caught up with the influx.

MOAS reacted incredibly quickly to reports of the initial wave of arrivals and established its Cox’s Bazar headquarters on the 3rd of September 2017. Following a needs assessment within the community and an urgent appeal for assistance from its global community, MOAS began importing food aid for distribution at centralised aid stations, as well as establishing its Aid Stations in proximity to the least-serviced Rohingya settlements. In recognition of the pressures large numbers of arrivals places on the resources and infrastructure of small communities, it was agreed that the Aid Stations would provide medical assistance to the local Bangladeshi community as well as the refugees.

On the 14th of October, just one month after planning began, Regina officially opened the Shamlapur Aid Station with the support of the Shamlapur village leaders, regional officials, the local military and, of course, the Rohingya community. The clinic saw over 1,500 patients in its first week and has become a central point for those seeking assistance, advice and treatment in the area. 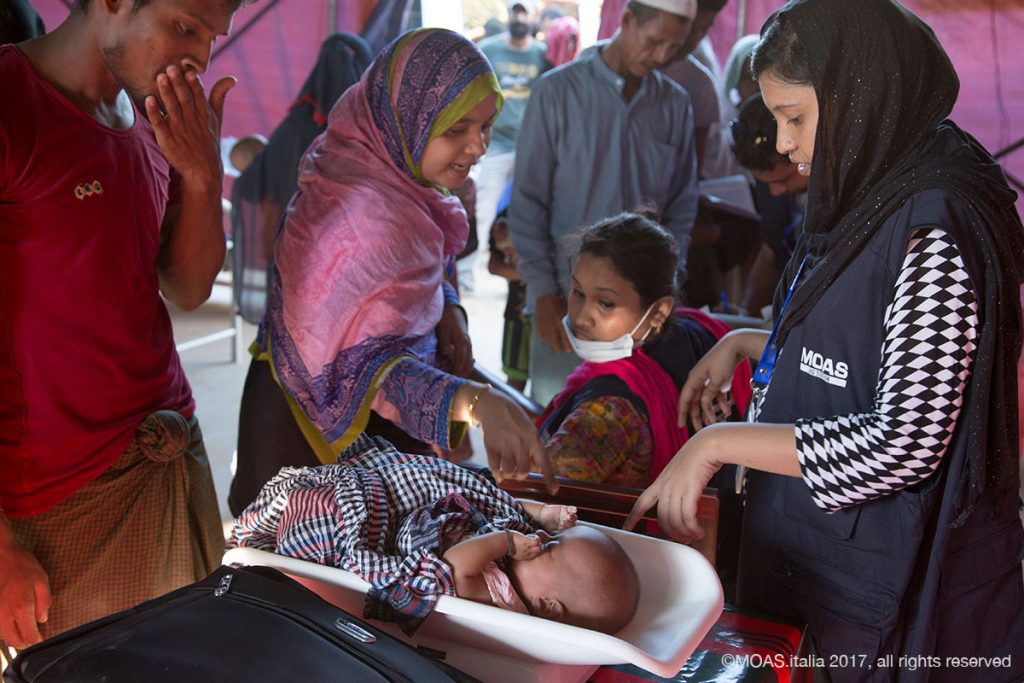 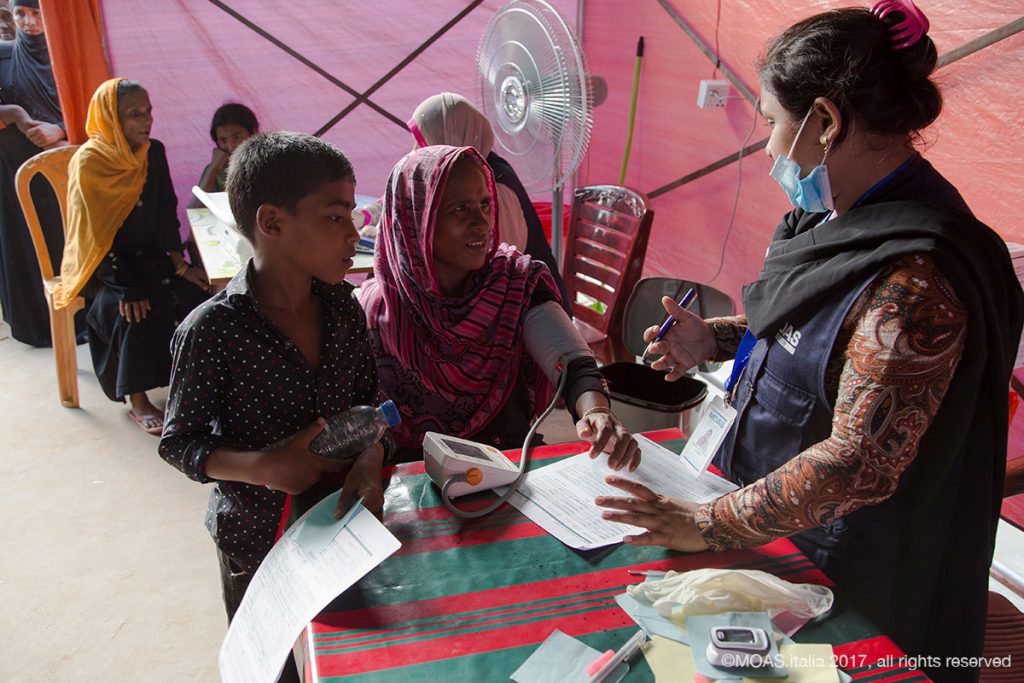 The Aid Station model is due to be replicated across settlements, with changes to service provision based on the needs of the area. For an in depth look at what services the Aid Station provides, the patients we treat and a breakdown of the operations inside it, look out for our upcoming blog: ‘MOAS Aid Stations, An Inside Look’.

When reflecting on this field visit a sense of pride in the activities and achievements of Shamlapur Aid Station, is somewhat overshadowed by the sheer desperate need still present within the community. MOAS is dedicated to providing critical and underlying medical care, with a special focus on child and maternal health, and knows there is much more to do each day.

Keep up to date on our progress here and on our social media platforms or by signing up to our newsletter at the bottom of this page and please, donate what you can to MOAS to help us provide medical care, medication, ambulance services and much more to these communities in need.