There are few sports that can grip people quite like football.  This year’s FIFA World Cup in Russia has been no exception.  Every four years, 32 international teams compete to become the next World Champions.

It’s a spectacle complete with chants, costumes and fanfare, the roars of the crowd and the electricity and tension of last minute triumph. Millions of people join in the action from around the world, watching, listening and reading about who goes through and who gets knocked out.

But what’s playing out on screens is more than just a sport; it’s deeper than that.  Football has a way of unifying people, transcending differences, and in some cases, allowing people to put their difficulties aside, even if just for a moment. 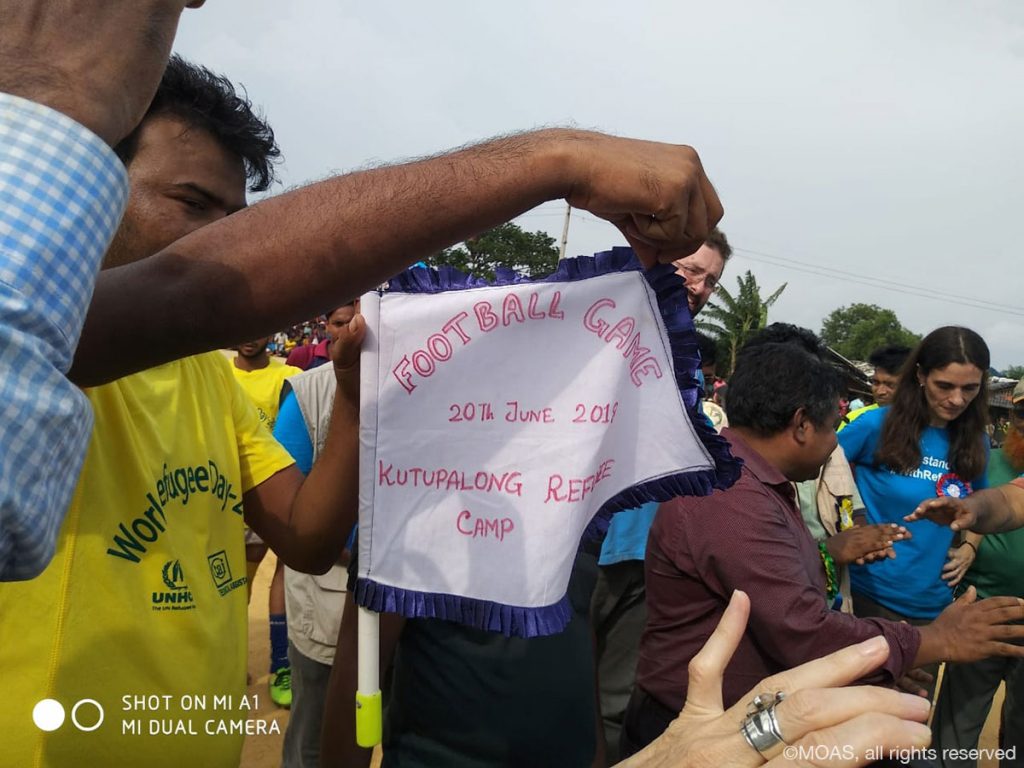 The exchange of the match banner 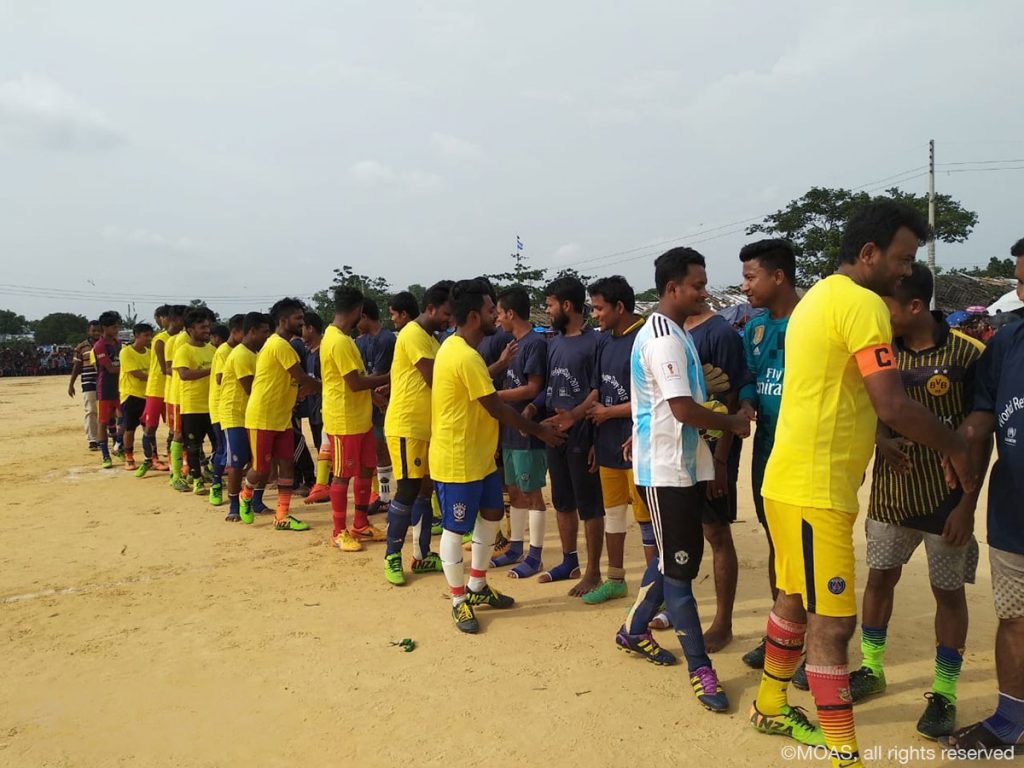 It’s a balmy afternoon in Cox’s Bazaar Bangladesh and the temperature is a sweltering 33 degrees with humidity hitting the high 80s. The referee’s whistle blows and the patch of dusty ground inside Kutupalong Refugee Camp comes to life with the sound of a football passing between feet and shouts from players.  These are Rohingya men representing the Registered Rohingya refugees (in yellow) and their opponents, the Makeshift team made up of newer arrivals (in blue).  The UN Refugee Agency, UNHCR, organizes this event every year. 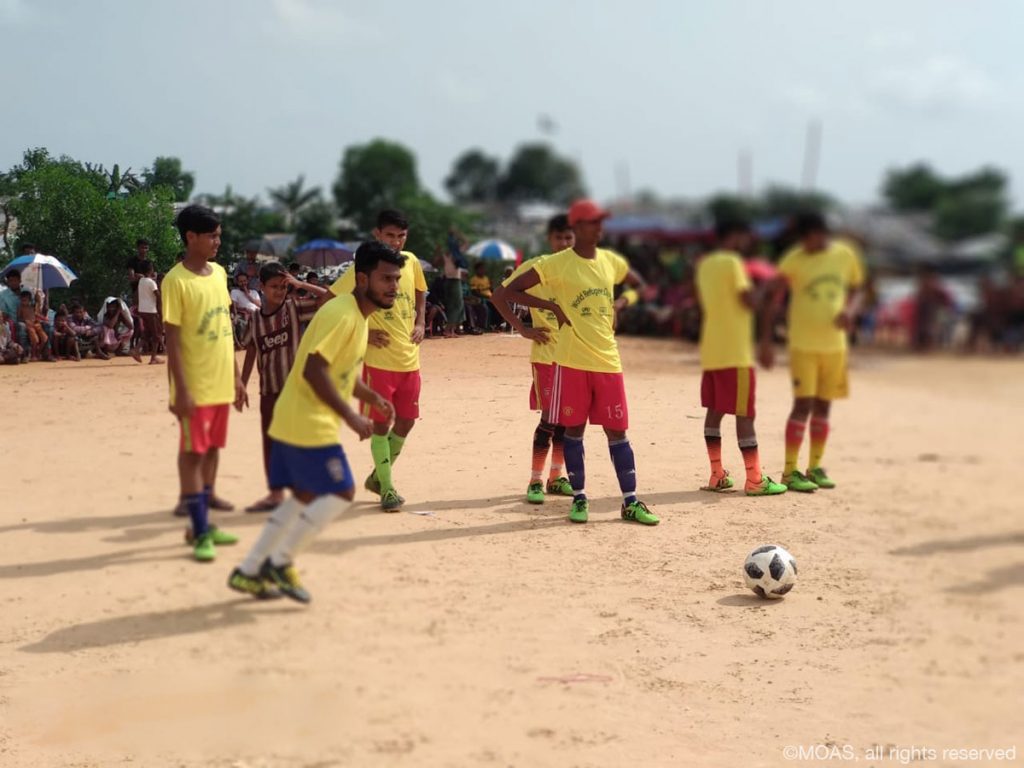 ‘We play a lot of cricket and volleyball but that’s nothing compared to how much we love football.’

That’s Salim, one of the supporters of the Registered Rohingya team. He says sports like football help refugees deal with the difficulties they face.

‘Rohingya people are crazy about football and sport like this really helps us deal with the hardships we face living in the camps.” 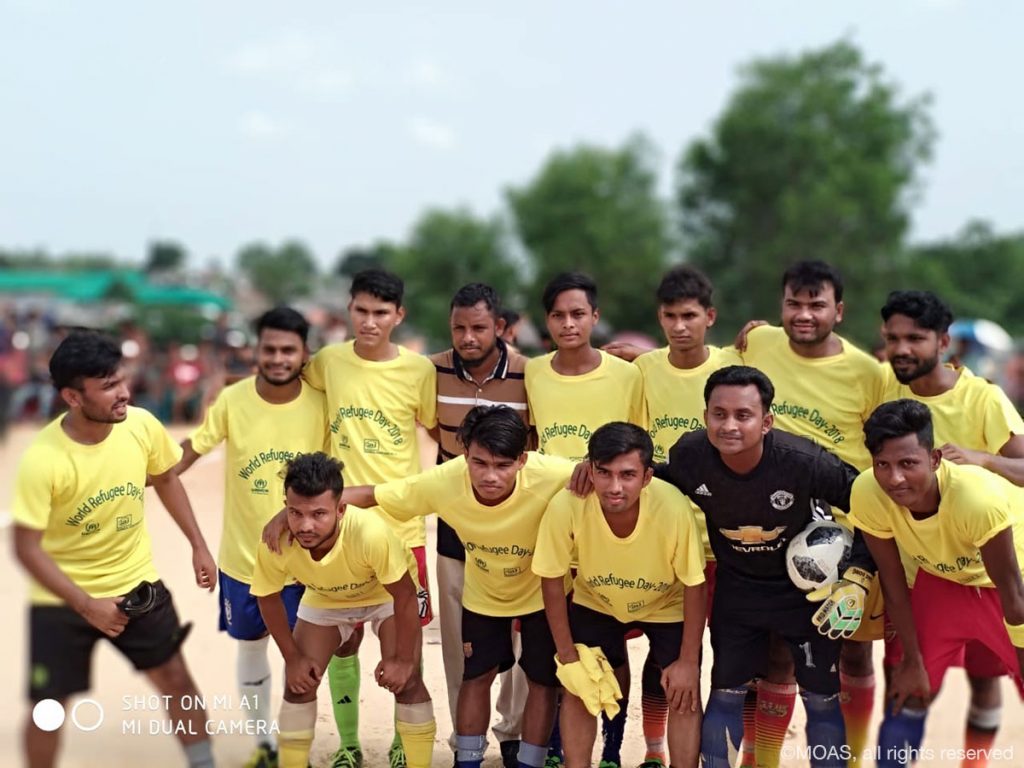 The players from the Registered Refugee team

The game has particular significance this year. Since August 2017, over 700,000 Rohingya refugees from Myanmar have arrived in Cox’s Bazar, Bangladesh. They’ve joined the community of over 400,000 refugees who had arrived in previous waves of displacement.  It means that there isn’t a person sprinting across the makeshift pitch who hasn’t been affected by the ongoing crisis.  Many have witnessed atrocities committed against their families by the Myanmar military, their villages burned down and have faced perilous journeys over land and sea to Bangladesh.

‘I  think that football really is this universal game. It’s played in every town, in every city on our planet. You just need a pitch, but you don’t need a stadium or a grass field. You can play anywhere, you can play on the street, you can play wherever …’ 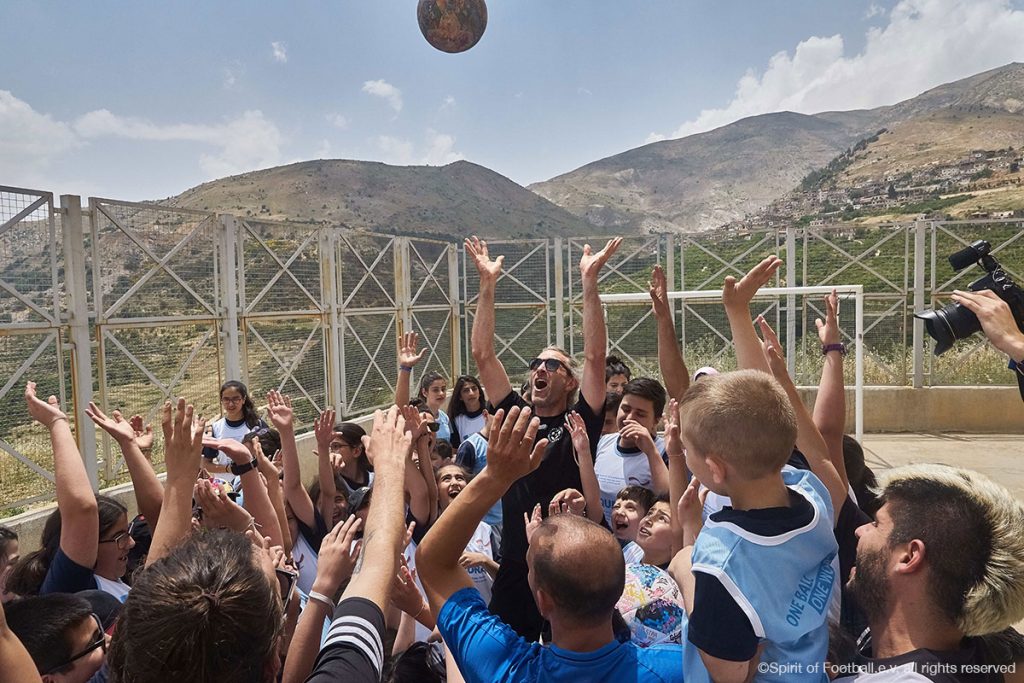 The tour of ‘The Ball’ in Lebanon

That’s Andrew Aris, founder of the Spirit of Football, a German based NGO using football to bring host and refugee communities together. He’s just returned from the tour of ‘The Ball’, a project that’s been spreading the values of football to refugee and host communities around the world, during the World Cup.

He says that football is a simple game but it has the power to transcend complex problems and bring communities together.

‘…It’s just a simple game that can bring people together and can help people forget  – for a moment – about some of the bad stuff that’s going on in their lives in their communities and the world, and do sport, do exercise. You feel the goodness that sport brings and it free one’s mind and you meet new people. So, it’s maybe music that is the only other thing that connects people like football can. I don’t think there’s anything else in our world. It doesn’t matter about religion, language, it doesn’t matter about the colour of one’s skin or age.’

The final whistle blows in Kutupalong, bringing the game to close.  This year’s victors are the makeshift team, scoring 2 – 1 against their yellow vested opponents.  Over by the UNHCR tent, the awards are announced and two gleaming football trophies are awarded. The cheers rise as the blues raise their silverware. 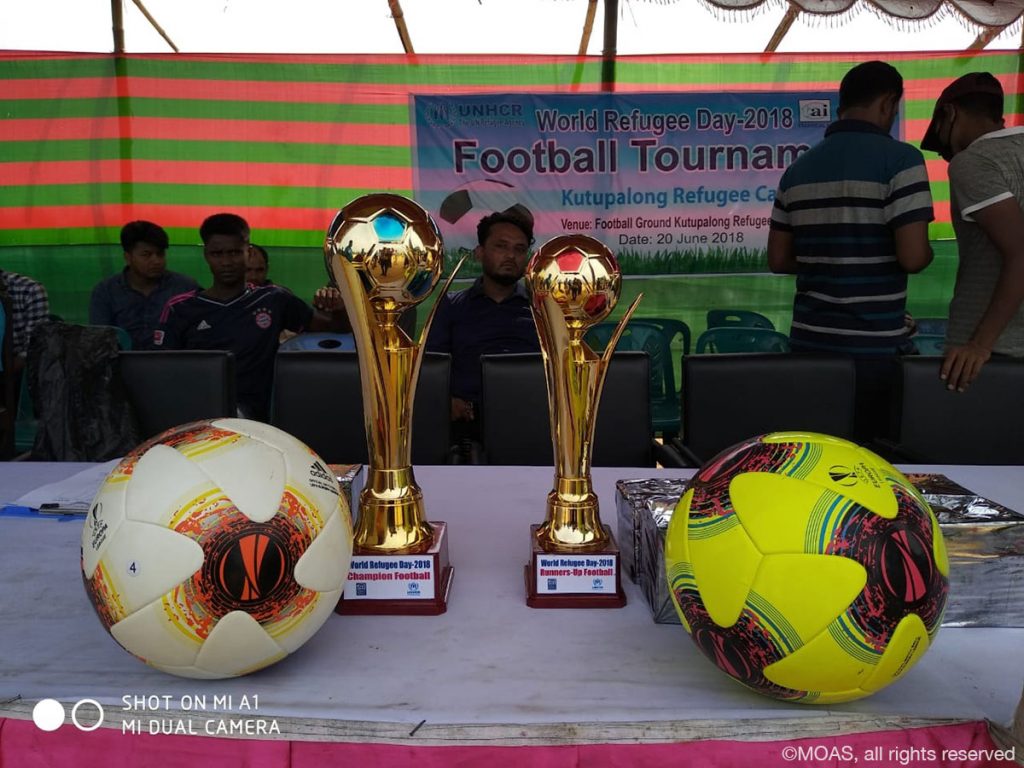 The trophies awarded to the winner (left) and runner up (right) 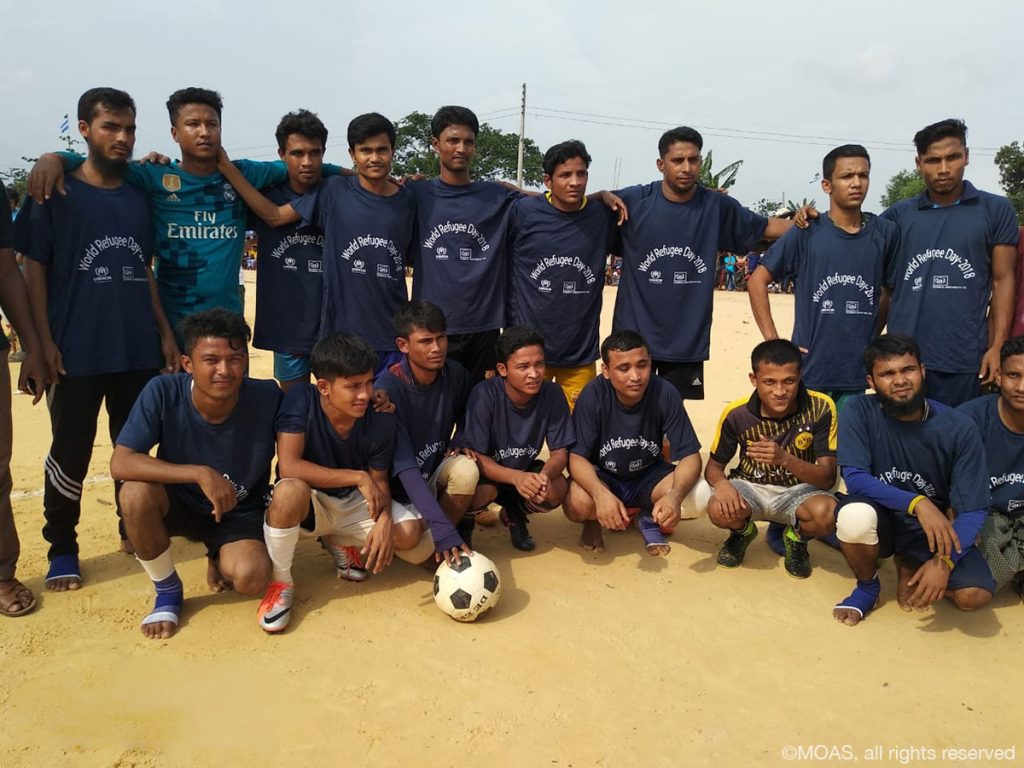 The winners of the football game, the Makeshift Refugee team

Although Salim’s team didn’t win, the experience was what counted the most.

As millions of people tune in to watch the World Cup Final between France and Croatia, take a moment to think about what football means to you and what it might mean to someone else. What’s playing out on our screens is more than just a sport; it’s deeper than that.

You can support MOAS’ work in Bangladesh providing emergency healthcare to Rohingya refugees by donating here, or fundraise with friends to become a part of our activist community. You can also receive regular updates by signing up to our newsletter at the bottom of this page or following us on social media.