The MOAS Aid Station at Unchiprang serves a spontaneous settlement of over 23,000 Rohingya refugees, all of whom have arrived in the months since the outbreak of violence in Myanmar on 25th August 2017. Recognising the immense need in the refugee camp and the potential health crisis facing its inhabitants, the Aid Station at Unchiprang was established and set up in under two weeks, and now treats up to 300 people every day.

Inside Unchiprang refugee camp
Located in a remote part of Teknaf, Bangladesh, Unchiprang refugee camp has been carved out of the jungle on hilly, uneven terrain. Surrounded by rice fields and dense vegetation, many shelters in the camp teeter on the edges of steep drops, while the narrow pathways winding throughout the camp are crossed by small streams of dirty water which flood low-lying shelters when it rains. Entire families live in one-room shelters, and many struggle to access sanitation facilities.

Life goes on here, as makeshift mosques, schools and barbers serve a community trying to rebuild their futures. A busy bazaar lines the main road into the camp, although this is mainly used by local people, as many of the refugees have very little money and must rely on humanitarian assistance for their meals. Children are everywhere, playing between the shelters or diligently collecting food or water for their families.

Of huge concern to MOAS and the other NGOs present in Unchiprang is the profound and growing problem with access to clean water. The toilets serving the thousands of camp inhabitants are little more than deep holes, meaning that sewage is seeping down through the earth towards the water sources and the risk of the spread of water-borne disease grows ever greater. 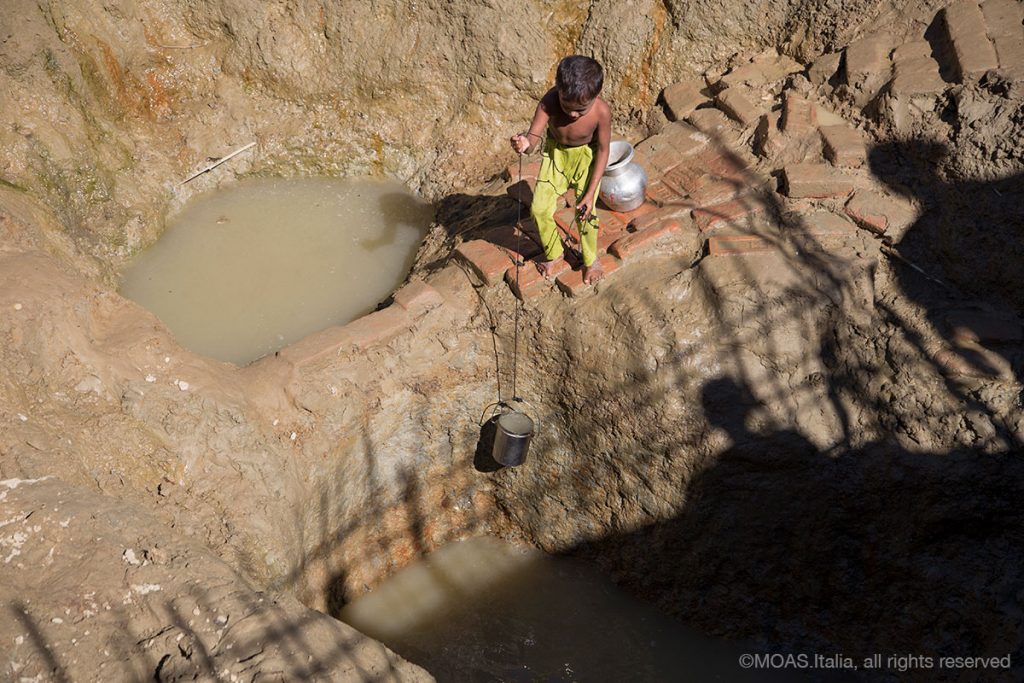 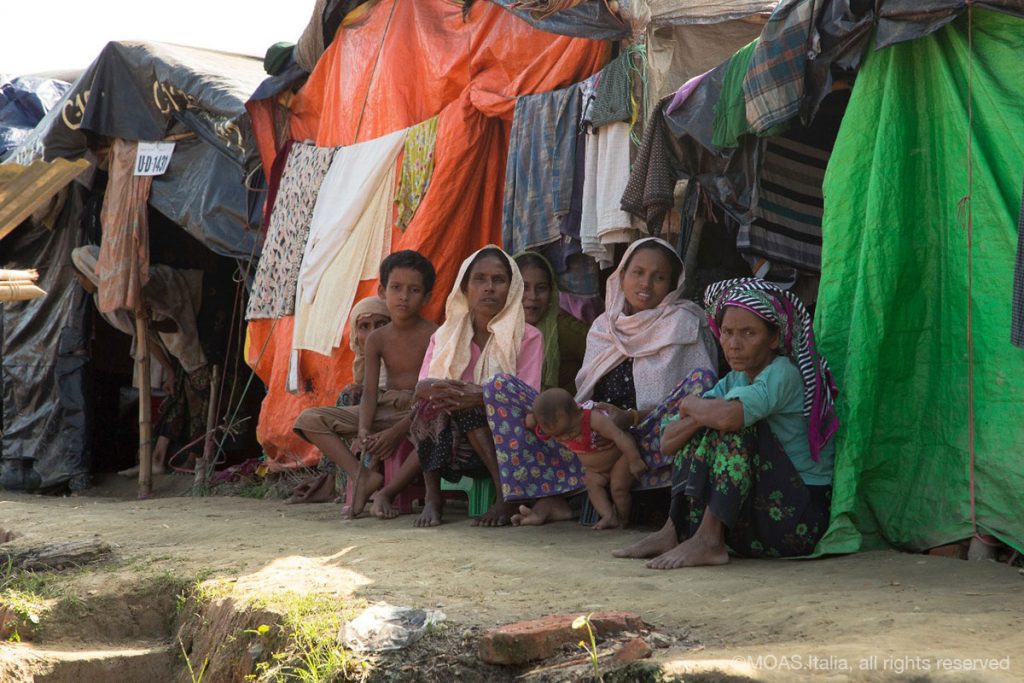 The Aid Station
70% of the patients at Unchiprang Aid Station are newly-arrived Rohingya refugees suffering from physical wounds and trauma from the violence they witnessed in Myanmar, or recovering from the long and difficult journey to Bangladesh. Many of the Rohingya patients we see have had minimal contact with medical services throughout their lives and are often in very poor health, while the overcrowded and unsanitary conditions in the camp only worsen the situation.

Despite its role as an emergency clinic at the frontline of this health crisis, as you first enter the Aid Station the first thing that strikes you is the atmosphere of calm and peace. Set slightly outside the bustle and activity of the refugee camp, the Station provides a space of respite and care. Patients wait in the shaded waiting area, while cultural mediators gently usher men, women and children of all ages into the two medical tents to be treated. As they wait, patients are free to use the clean drinking water provided from a water tower by the Station’s entrance.

The sense of order here is thanks to a finely-tuned system that makes sure that patients are given the most effective care and treatment possible. When someone first arrives at the Aid Station, they are registered and given a numbered tag. They then see a MOAS nurse, who asks the patient to describe their ailment and undertakes the initial triage. They are then categorised as having a green, yellow or red case, depending on the seriousness of their condition.

If someone presents as a green or yellow case – for example fevers, pains, headaches, skin diseases and coughs – the patient receives a full check-up from a doctor, who will prescribe the necessary medicines or, if needed, refer the patient to the adjacent tent for further observation or treatment. Once a patient has received the treatment they need, they then visit the onsite pharmacy, where they can collect their prescriptions free of charge. This free access to medication is vital for many of our patients, who would otherwise not be able to afford the antibiotics, anti-inflammatory and pain-relieving medicines they need.

If it is clear that someone requires further care or is a ‘red’ case, – for example, if they are badly injured, have severe breathing problems or diarrhoea, or have collapsed – they will be taken directly to the emergency tent to receive immediate treatment. There, the team is equipped with ultrasound machines, an electrocardiogram machine, a cardiotocography machine, suction machines, an electrosurgical unit, and cardiac monitor machines, and are able perform minor surgeries and place patients in the recovery suite to be kept under observation. 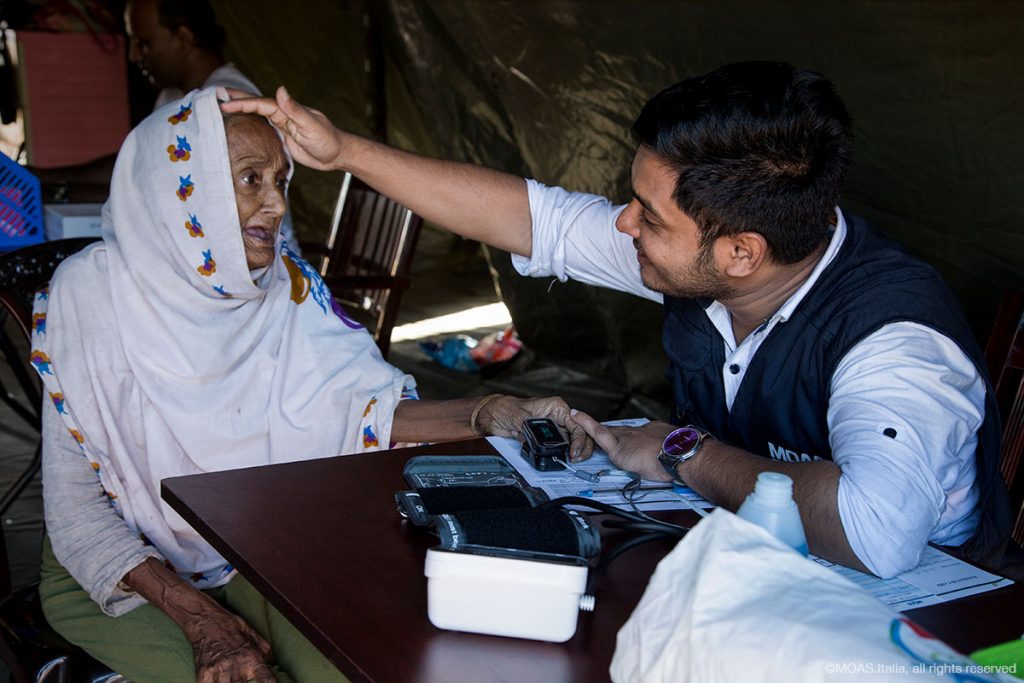 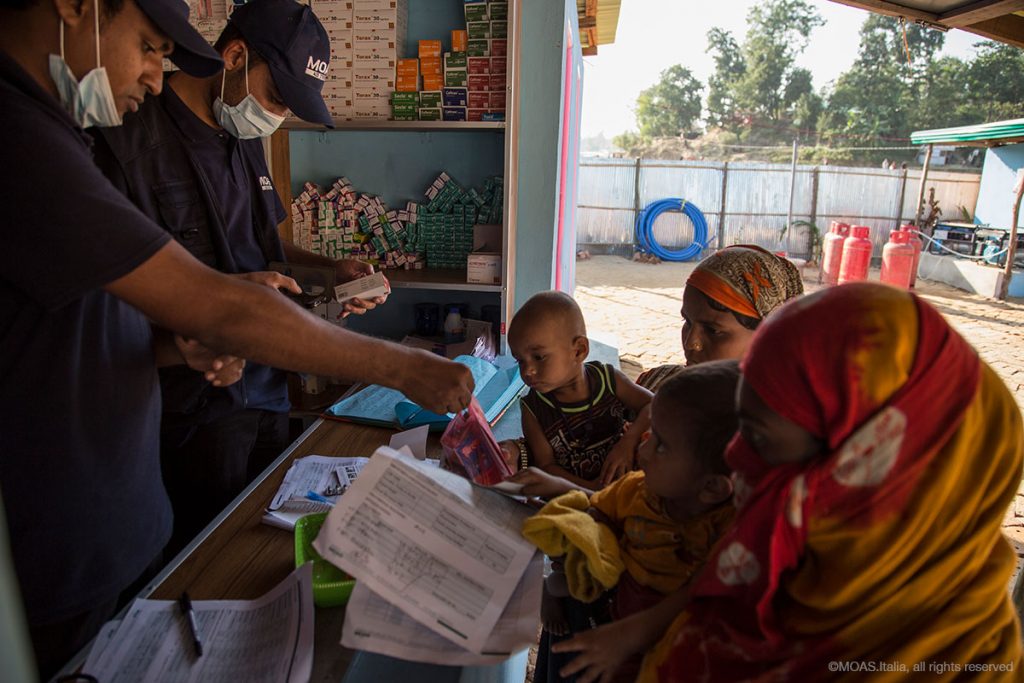 Should a patient present with an extremely serious case requiring major surgery or other serious interventions, the Aid Station is equipped with an ambulance to transport the patient to the appropriate hospital or facility, accompanied by a MOAS nurse.

Having opened on the 10th November 2017, MOAS’ services at Unchiprang have now been accessed by over 10,000 people. Reflecting the demographic make-up of the refugee population, 54% of our patients here are children and minors under the age of 18. Respiratory illnesses, gastric distress, malnutrition and fatigue are the most common ailments, while the poor general health of the refugees and the camp conditions mean that the incidence of acute cases requiring urgent care has been high.

2-year-old Zubair was one such case. He was brought to the Aid Station having been suffering from a fever for over a week, which had let to febrile seizures, threatening long-term effects on his development. The medical team quickly stabilised Zubair to the immense relief of his mother, who told us that it had taken many years of trying for her and her husband to have children.

The remote location of Unchiprang also means that the Aid Station serves as an emergency lifeline for the few local communities in the area, many of whom sustain their livelihoods through agriculture. Recently, Shaiful, an elderly Bangladeshi man who had been working in the fields, was severely injured by the harvesting machine, causing deep wounds to his legs and side and badly breaking his arm. He was rushed to the Aid Station, where the team were able to stem the bleeding and transport him in the MOAS ambulance to the nearest hospital, where he required vascular surgery on his arm. 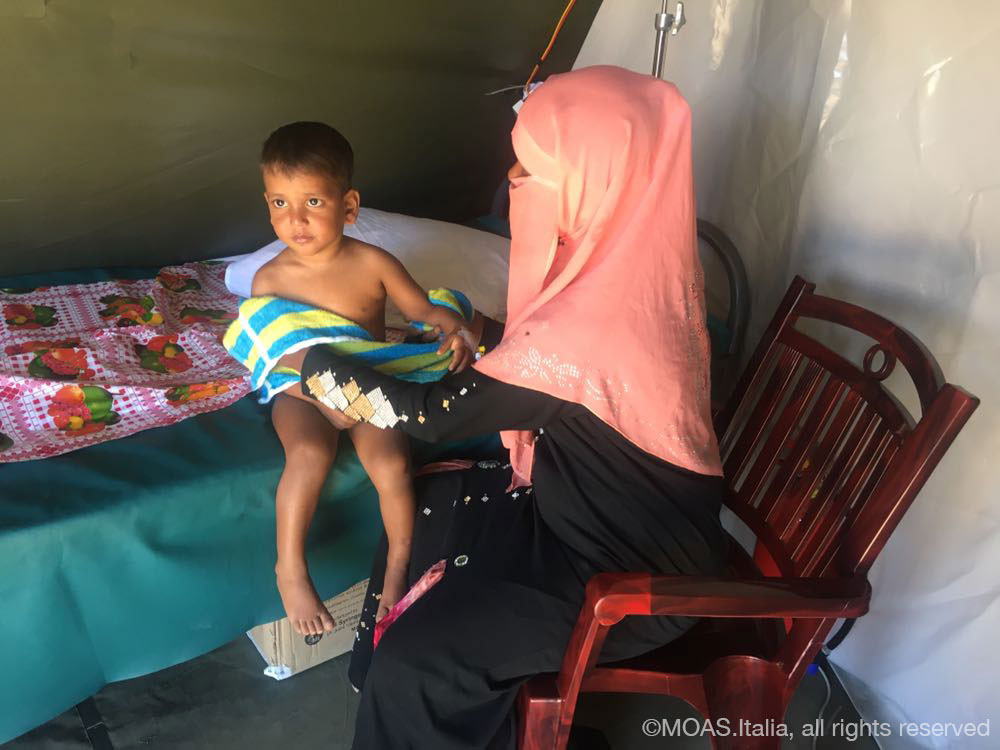 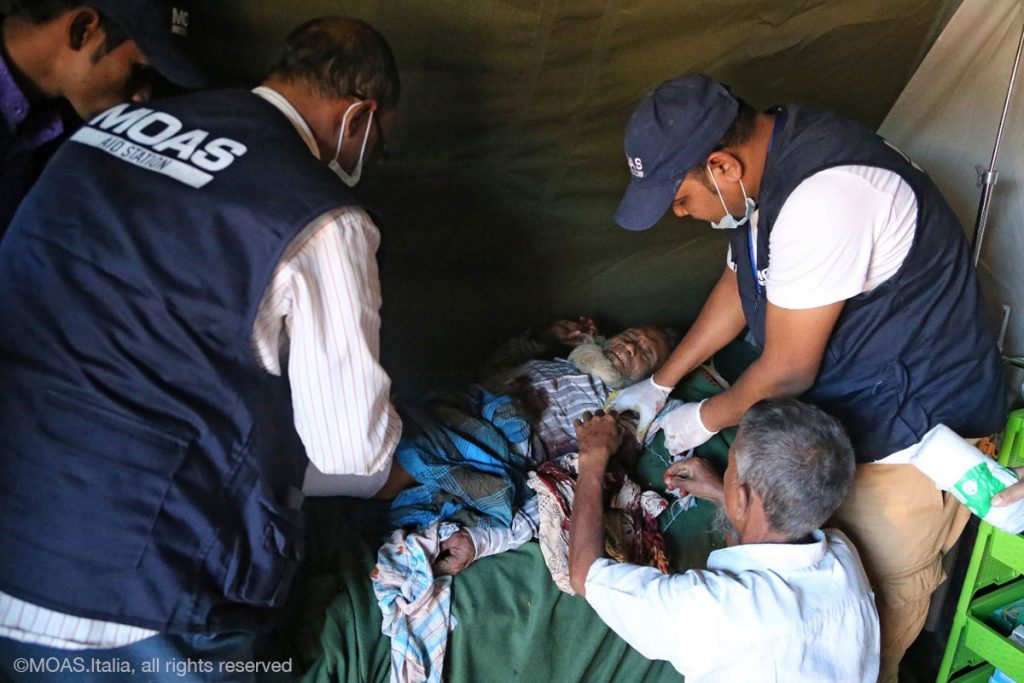 While cases like Zubair and Shaiful’s demonstrate the great existing need there is for emergency care in Unchiprang, the MOAS team knows that as the winter months draw in we will face increasing cases of pneumonia and respiratory problems, while the threat of communicable disease grows ever greater. As we mark our first month here, MOAS looks to the future, determined to continue working as hard as we can to provide emergency medical assistance to both Rohingya refugee and local communities in need.

If you are interested in supporting MOAS’ work, please give what you can on www.moas.eu/donate or consider becoming a fundraising activist on www.moasfundraising.com. You can listen to a podcast about our work in Bangladesh here, or read about our first delivery in our Shamlapur Aid Station here. Spread the word about our work by sharing our stories on social media and sign up to our newsletter for regular updates.