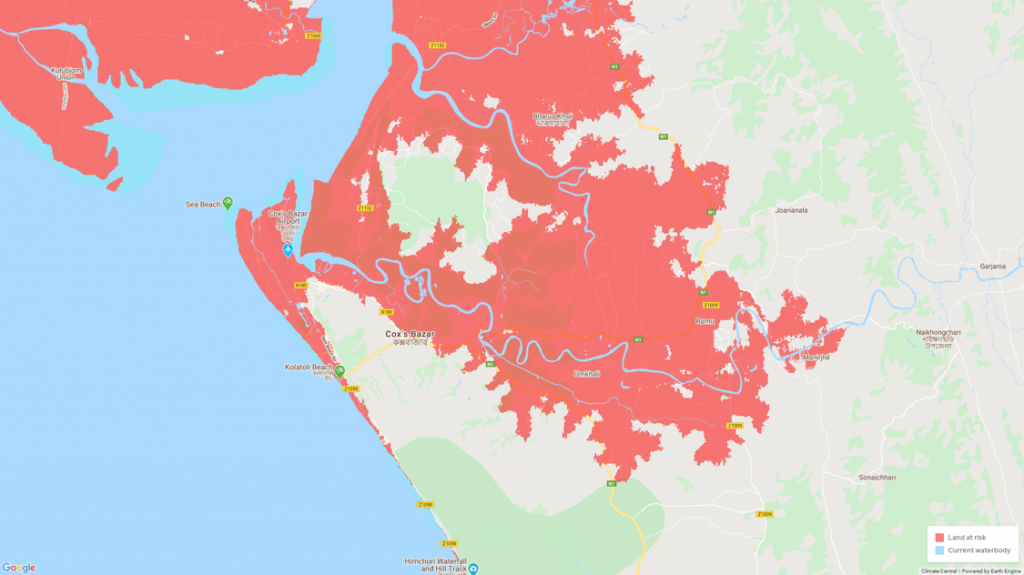 Rising sea‐levels is one of the foremost consequences of climate change. Coastal settlements, infrastructure and ecosystems all over the world are threatened by the double-edged sword of irreversible flooding and extended storm surge. Data based on thermal expansion of ocean water and the melting of glaciers can predict average rising global sea levels; however the effects on local sea levels can vary greatly. This has led to the development of this screening tool by Climate Central, which examines localities with greater scrutiny and identifies areas most urgently requiring adaptation planning and risk management.

In 2017 more than 740,000 stateless people fled their homes in Myanmar and crossed the border to Bangladesh to escape renewed persecution from the authorities. They joined refugee camps in Cox’s Bazar that have hosted displaced Rohingya people since the 1970s. Some families have remained within these camps for generations, dependent on humanitarian aid, prevented from legally seeking employment or travelling onwards. One such camp is Shamlapur, also known as Camp 23. Over ten thousand Rohingya people spend every day of their lives within the confines of this camp. In just ten years’ time they will once again face the complete annihilation of their communities. Even adjusted for best possible outcomes, by 2030 huge areas of Cox’s Bazar will either be flooded by saltwater annually or remain permanently underwater. Hundreds of thousands more of the Bangladeshi host community living and working in the surrounding areas will also lose their homes and livelihoods.

As the situation currently stands, 1 in 4 of the Bangladeshi population already live on land at risk of flooding. During the rainy season more than one-fifth of the country can be underwater. Traditionally this has long been the price paid for rich agricultural soils and lucrative maritime trade routes. Climate change, however, is disrupting historical rain patterns – leading to droughts in some areas and unexpected downpours in others. Silt-heavy runoff from glaciers in the upstream Himalayas has increased, leading to unprecedented riverbank erosion: riverbanks accumulating to an area larger than Manhattan wash away every year. As a result, displacement driven by flooding is already beginning across the country. Sea level rise is a near term danger: governments must make choices not just on the behalf of future generations, but also for themselves.

On a global level, immediate cuts to emissions made roughly in line with the Paris agreement could modestly reduce the danger posed by rising seas. Locally, governments should avoid new construction in areas at high risk of inundation, while protecting, relocating, or abandoning existing infrastructure and settlements in these areas. Contrary to these recommendations, recent expansion of the airport at Cox’s Bazar was carried out in an area predicted to be completely submerged within ten years.

In lieu of rapid government action, MOAS is already implementing a comprehensive and effective flood and water safety response in the Cox’s Bazar area. Water safety experts from MOAS are building capacity at community level to manage dangers encountered at sea and in the fallout of heavy rains and flooding. We provide high quality equipment and specialized training to people living in high risk areas, creating first responders on hand to monitor water sources and provide assistance in water-related emergencies. These skilled volunteers have the ability to act in-line with internationally recognized best practice, reducing water related dangers and deaths in and around the camps of the region.

The training has already had lifesaving results – on the 6th July 2019, a 14-year-old boy got into difficulty whilst playing in a reservoir. MOAS-trained volunteers came to the rescue and saved him from drowning. Over 1,450 safety volunteers have been trained by MOAS so far and this year the program is being expanded to encompass the local fishing community.