Fire risks represent a clear and present danger to refugee and displaced persons and emergency operations worldwide. Together with monsoon flooding, fires are one of the most dangerous/deadly threats to infrastructure and security in the Rohingya refugee camps in Cox’s Bazar region of Bangladesh – putting the lives of thousands of people, particularly children and women, at risk. 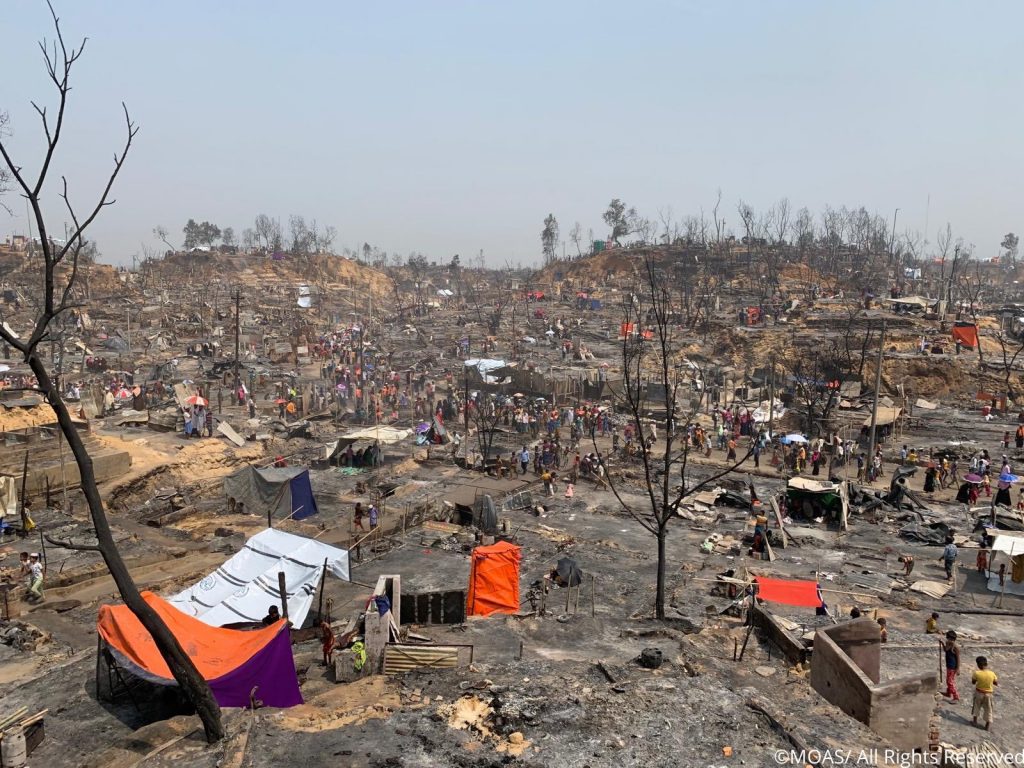 According to the analysis report from Cox’s Bazar Site Management Sector, a total of 172 fire-related events occurred in the camps from May 2018 to February 2021. Seven of these incidences occurred in 2021. In March this year, a massive blaze broke out, leaving 15 dead, over 500 injured and at least 10,000 shelters destroyed. One such event displaced around 45,000 refugees.

Other fires across this period have affected tens of thousands of individuals.  Thousands of shelters and core support facilities like health clinics, distribution points, and learning centers have been destroyed. Over 550 of these were destroyed in the 11 January 2021 fire in the Nayapara Registered Refugee Camp, requiring the relocation of 3,500 individuals while shelter reconstruction took place.

The camps in Cox’s Bazar are largely constructed from flimsy tarpaulin shelters with little or no space between them which makes it extremely easy for fire to spread, particularly during the dry and hot season. Considering the materials used in shelter construction, any fires breaking out in the camps can behave like a wildfire: progress is rapid with the fire moving quickly from structure to structure through the densely packed camp. The widespread use of liquid petroleum gas (LPG) for cooking has added further complexity and potential risk to the process of fighting fires in the refugee camps.

The Bangladeshi Fire Authorities and Civil Defence (FSCD) are responsible for tackling major blazes and the UN and other organisations working on the humanitarian response have created fire safety points with sand buckets throughout the camps, and have provided basic fire-safety training to volunteers. The FSCD unit provides trained firefighters equipped with fire engines and trucks. However, the remoteness of the camps and their cramped layout, with extremely narrow passageways, can make access time consuming and difficult with large fire engines. Furthermore, while sand buckets can be useful for extinguishing smaller fires, once a blaze gains traction there is little that can be done to control it under the current system.

“According to an EU report which assessed the fire prevention, preparedness, and response capacities in the Rohingya camps in 2018, a series of actions are recommended to address the fire issue. Attention is focused on the need to strengthen the capacity of the Rohingya Safety Volunteer Units (SUV) in the camps to act as fire “first responders” by increasing the variety and robustness of their firefighting equipment; and the need to address the lack of bulk water for firefighting through the instillation of dedicated small (~1,000 liters) water storage tanks throughout the camps, and the availability of human-portable pumps and hoses for the SUVs. Nevertheless, none of these recommendations have been put in place so far”, a MOAS expert says.

Given the predictable and inevitable nature of the fire threat and the deadly impact it can have on lives and livelihoods, it is imperative to take action to identify gaps and improve fire response capacity. MOAS conducted a pilot programme in April and May, with support from the U.S. Agency for International Development (USAID), WFP, and implementing partner Helvetas, to identify and verify effective prototypes for fire preparedness and first response. Building on this, MOAS technical experts want to establish a new project which harnesses innovative solutions to address the life-threatening dangers posed by fires in the over-crowded camps – where over 860,000 Rohingya refugees live after fleeing violence and persecution in Myanmar.

This project would facilitate the full implementation of a fire response system across all the Rohingya camps and will focus on two aspects. The first, is to start large scale production of mobile, rapidly deployable, and easily operated Mobile Firefighting Units (MFUs) suitable for use within the Rohingya refugee camps. These MFUs were successfully prototyped in the previous WFP funded project. The second step of the project is the training of 3000 Rohingya Safety Unit Volunteers on the safe and effective operation of MFUs. The training will also focus on fire prevention and the maintenance of equipment.

This initiative is conducted by interagency Site Maintenance Engineering (SMEP) in partnership with the NGO Helvetas and with technical support from MOAS to rapidly design, build, and prototype a proof-of-concept selection of mobile firefighting equipment suitable for use within the unique terrain and infrastructure of the camps. In April, Helvetas/MOAS delivered a set of prototype Mobile Firefighting Units (MFU) for evaluation and field testing. The goal is to maximize the interoperability between the prototypes envisaged in the pilot and the existing FSCD systems and capabilities, including capacity strengthening, where appropriate.

MOAS hopes the solutions it identifies for improvements and addressing gaps in fire-fighting methods and trainings in the Cox’s Bazar camps can contribute to fire-fighting initiatives in displacement camp settings worldwide. Since 2017 MOAS is operating in Bangladesh, bringing aid and assistance to the Rohingya refugees; since 2019 we have been providing expertise and technical advice for the delivery of the lifesaving #FloodAndWaterSafety training to Rohingya refugees and host community.