This week at MOAS we are looking at what it means to be a family in crisis. In many crisis situations around the world, those most deeply affected are women, children and families. The logistical difficulties of traveling with children, the need for childcare alongside life-sustaining services and the vulnerability of the health of children and pregnant or post-natal mothers are just a few things that make families in crisis a particular priority in humanitarian programming. Below you’ll see some examples of the families we have met along our journey and their concerns and priorities. 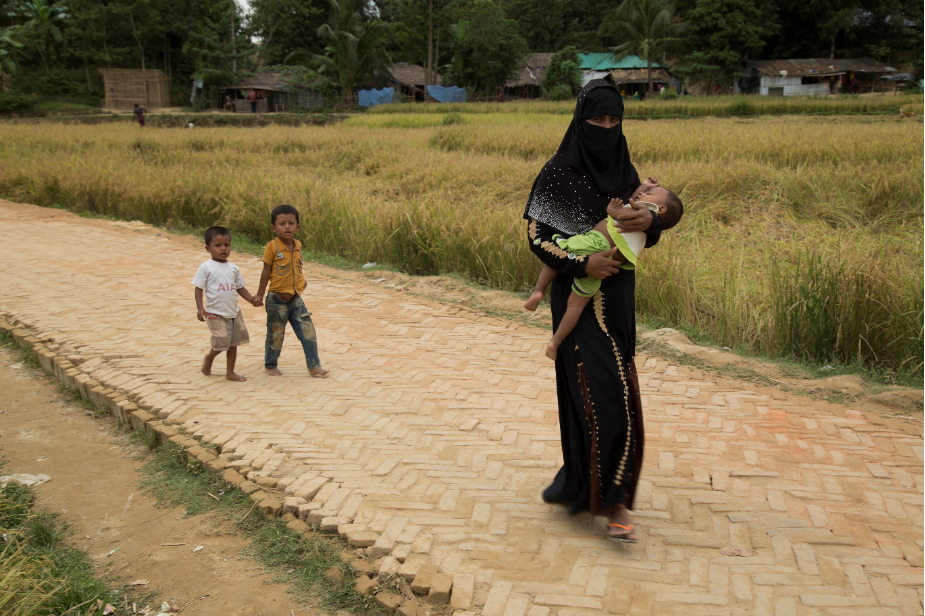 One-year-old Amir had been suffering from high fever for 6 days and lost consciousness on the way to the Unchiprang Aid Station. As a single mother, Sameera struggles to keep her three children safe and healthy in a camp where food is scarce and housing is inadequate. Though their lives are no longer in imminent danger, women and children continue to be at higher risk in camps. 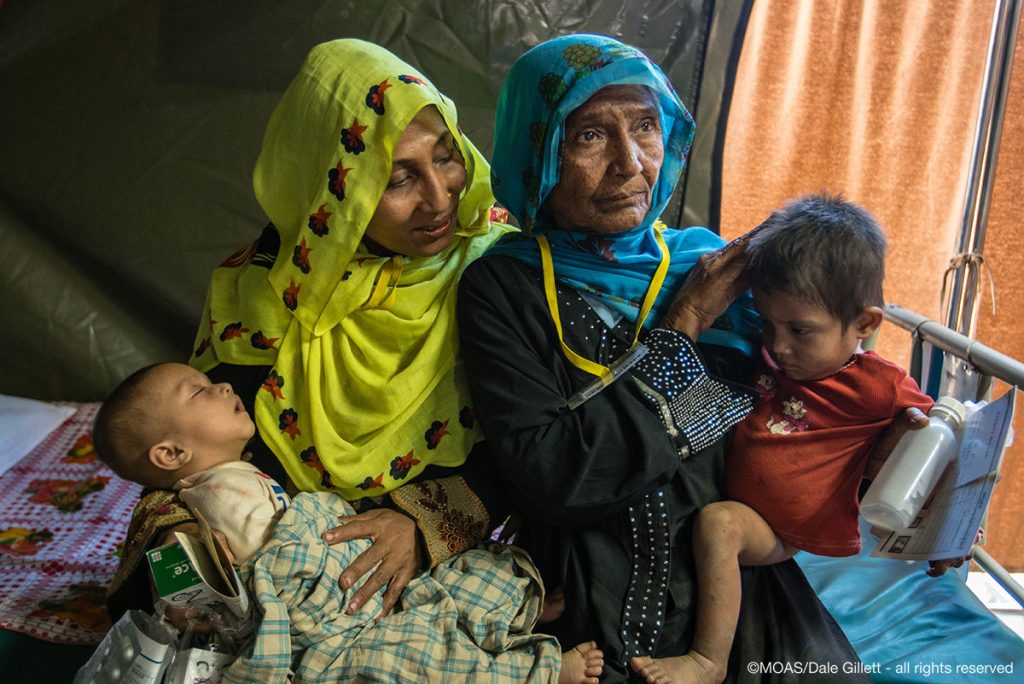 The father of Fatema, the young girl on the right of the photograph, was killed in the violence in Myanmar. After that, her mother tried to flee the country with her and was killed on the journey. Fatema is now among the more than 6,000 unaccompanied children living in Cox’s Bazar. Nuur was a friend of Fatema’s mother and has informally adopted Fatema as one of her own. Without suitable social care systems in place, children traveling without their parents often stay with family members or friends. 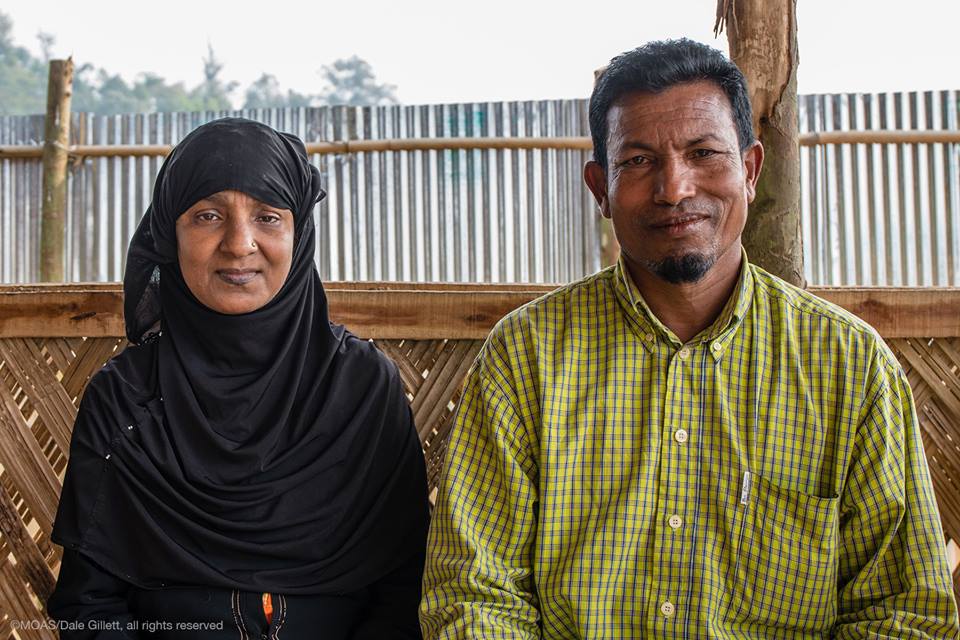 “My name is Mohammed and I’m 58 years old. My wife Faouzia is 55. We have eight children: the eldest is 38 and the youngest is 12. When the violence erupted, the Burmese military shot at us and burned our house, so we had to flee. Faouzia and I have been married for such a long time and have been through so much together that we know we can handle anything. Whatever happens, we’ll get through it together.” 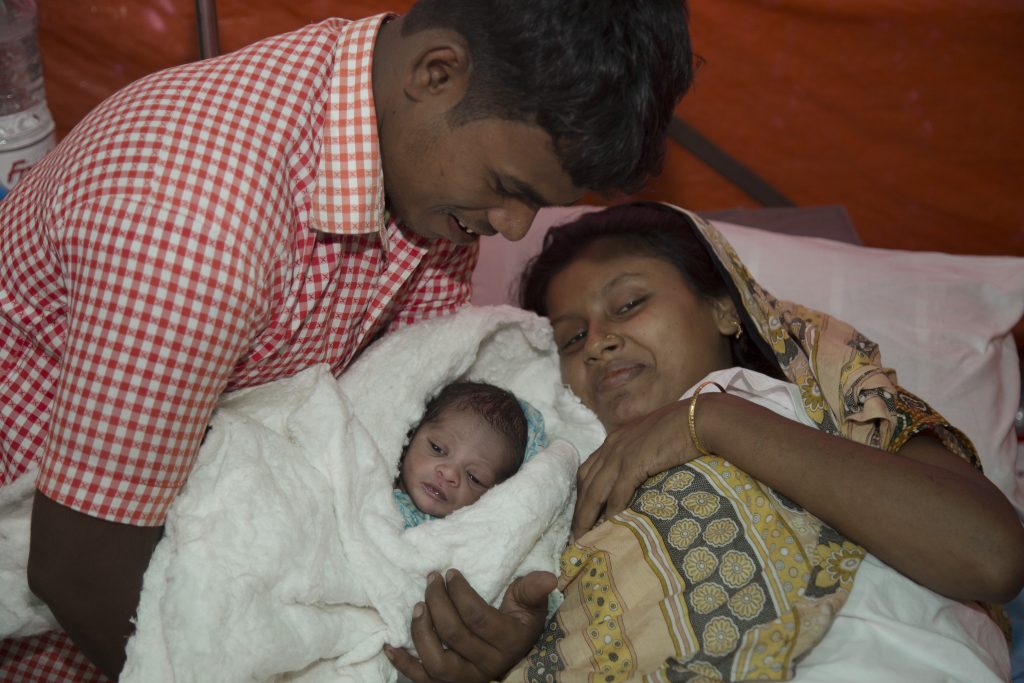 On the 12th November 2017, the MOAS medical team delivered the first baby to be born in the Shamlapur Aid Station. Nurunnahar, a first-time mother, came to the Aid Station in the mid-morning already in labour, and through the diligent care and guidance of the team, a healthy baby boy was born to relieved and delighted parents. Yusuf recently turned one and still lives in the camp with his parents, who are uncertain about the future but hopeful that one day the three of them will be able to return to Myanmar. 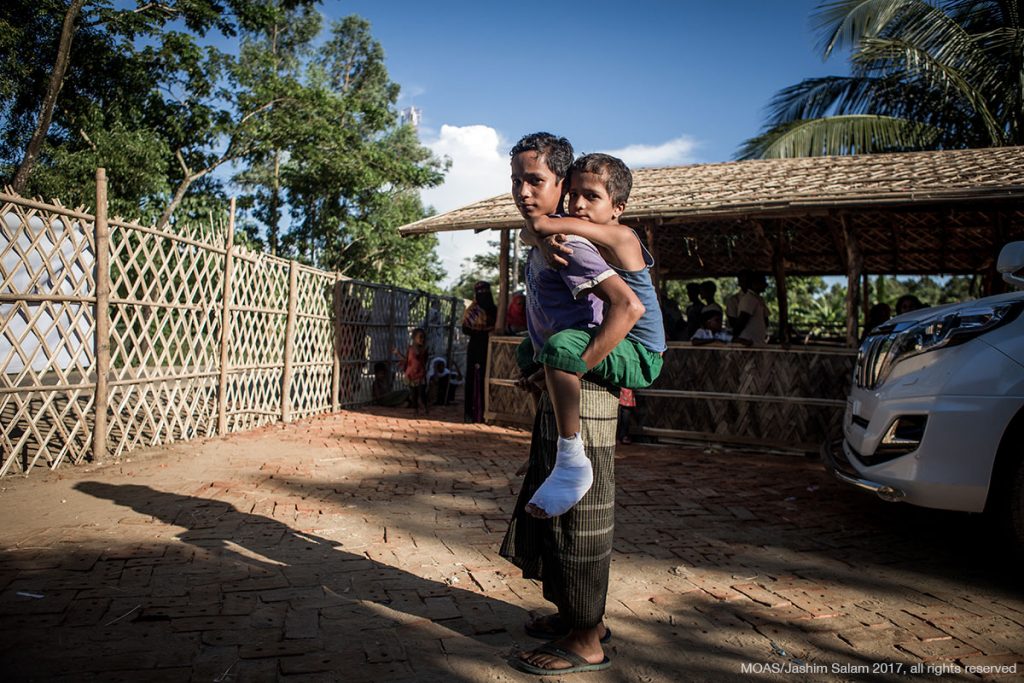 Without safe infrastructure or many educational opportunities, refugee children in Cox’s Bazar spend their time playing in unsafe conditions. Mustakh, the older boy, had to carry his younger brother to the Shamlapur Aid Station to get treatment after he injured himself while playing in the camp where they live. In a community where families are often led by single mothers and parents are occupied accessing basic services for the family, childcare duties for younger family members often fall to older siblings instead. 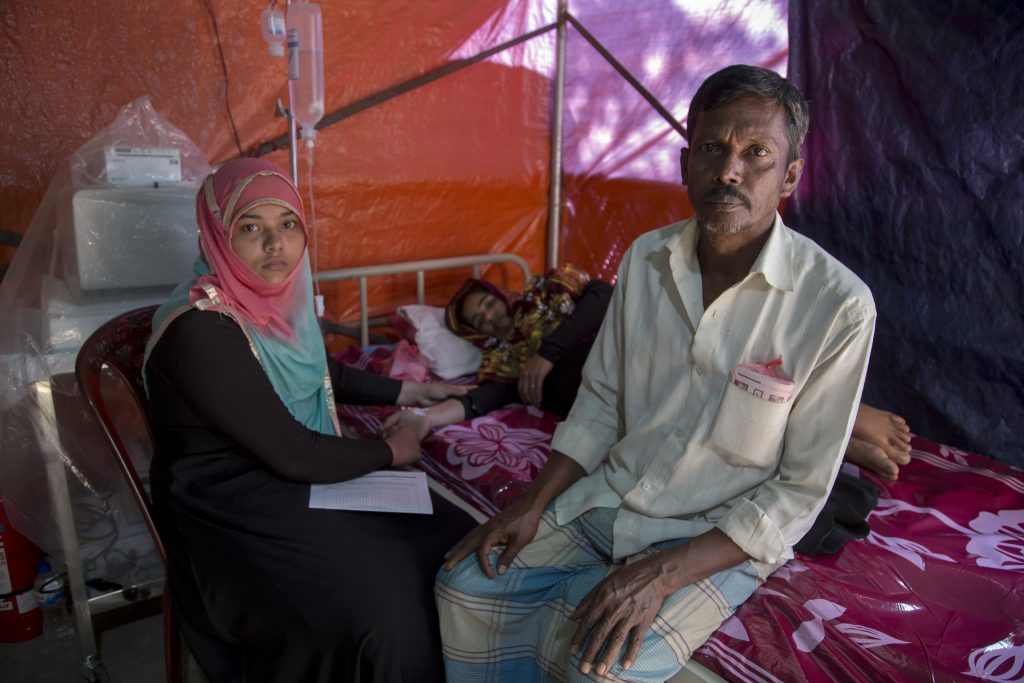 35-year-old Ruwida was rushed to the Shamlapur Aid Station suffering from severe stomach pain. Her husband, Shahad, told us that she has been periodically suffering with this pain for over four years but has never received a diagnosis. Osman and Shahidah have been displaced in Bangladesh for 20 years, and their 13-year-old daughter was born in the camps. Though the August 2017 exodus is unprecedented, the Rohingya have been fleeing violence since the 1970s leaving many families, like Shahidah’s, in protracted refugee situations 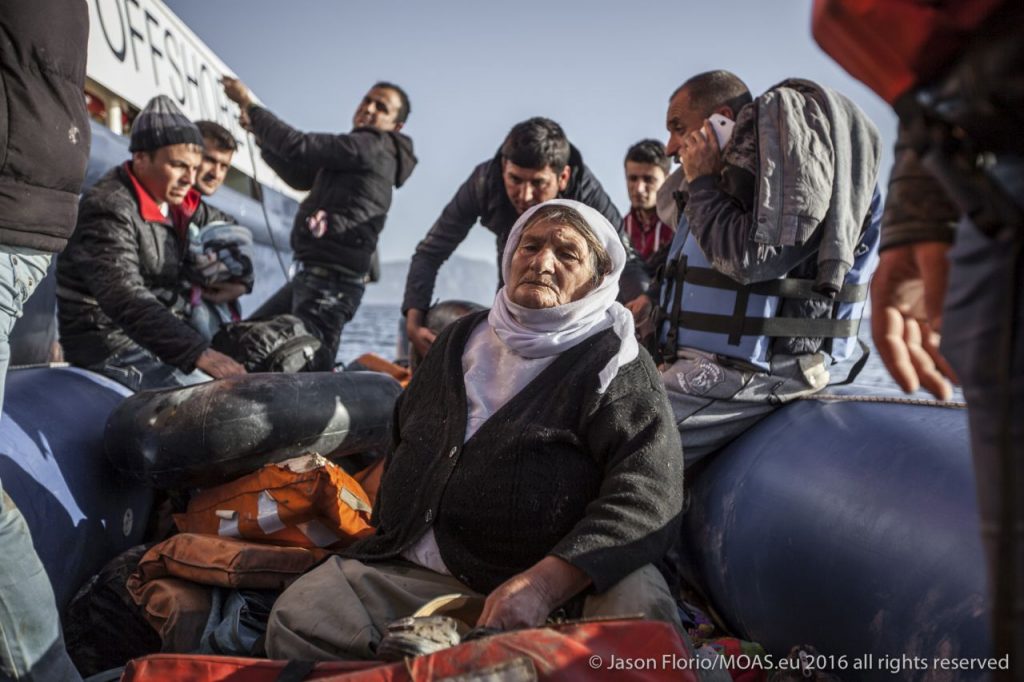 Madam Hallo, 84, and her husband, 92, fled their hometown of Sinjar, Iraq, with their son’s family after ISIS militants overran their village. Her brother-in-law and other relatives and neighbors were killed before they could flee. In spite of her age, Madam Hallo felt she had no choice but to seek safety with what remained of her family. She was found by our SAR crew onboard an unsafe vessel while trying to cross the Mediterranean – in the same year, over 5,000 people died attempting the same crossing. 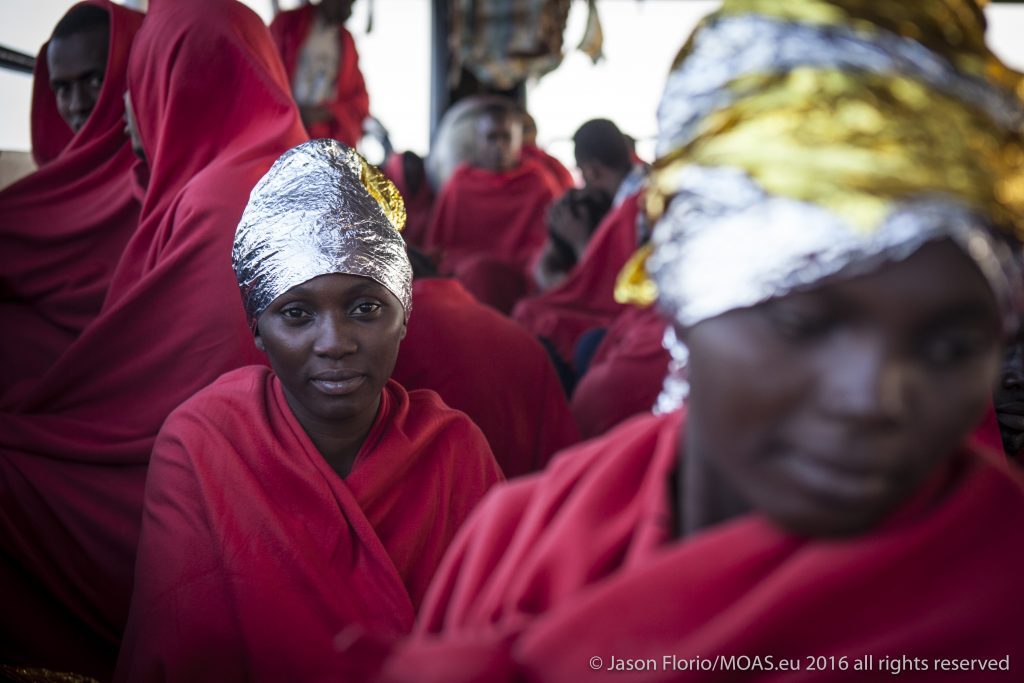 Busayo is a 19-year-old student from Nigeria. She was sold in Niger, along with many others, by a man who had told her she could get work as a nurse. She was then taken to Sebha, Libya and held in a camp. Women and girls, whether fleeing persecution or seeking a better life, are at an disproportionately high risk of trafficking and exploitation throughout the journey – Busayo is just one of them. Fortunately, she was able to escape and cross the Mediterranean, where she was rescued by the MOAS crew in November 2016.

Ammar is from Syria, where he was born and lived until the war took over. He was found by the MOAS crew in the Aegean Sea, together with his mum, dad, brother and sister. He said, “Today I was not afraid at all, because there in Syria I couldn’t go to school and I couldn’t paint, but when I’ll be over there [in Europe], I will go back, I will paint, I will be someone famous and the whole world will like my paintings. That’s why I’ve been very strong and brave. When I was younger, I was very happy to live with my mum and dad, to go to school and to paint. But when the war began, there were a lot of problems, I couldn’t go to school anymore, although I still wanted to learn.” 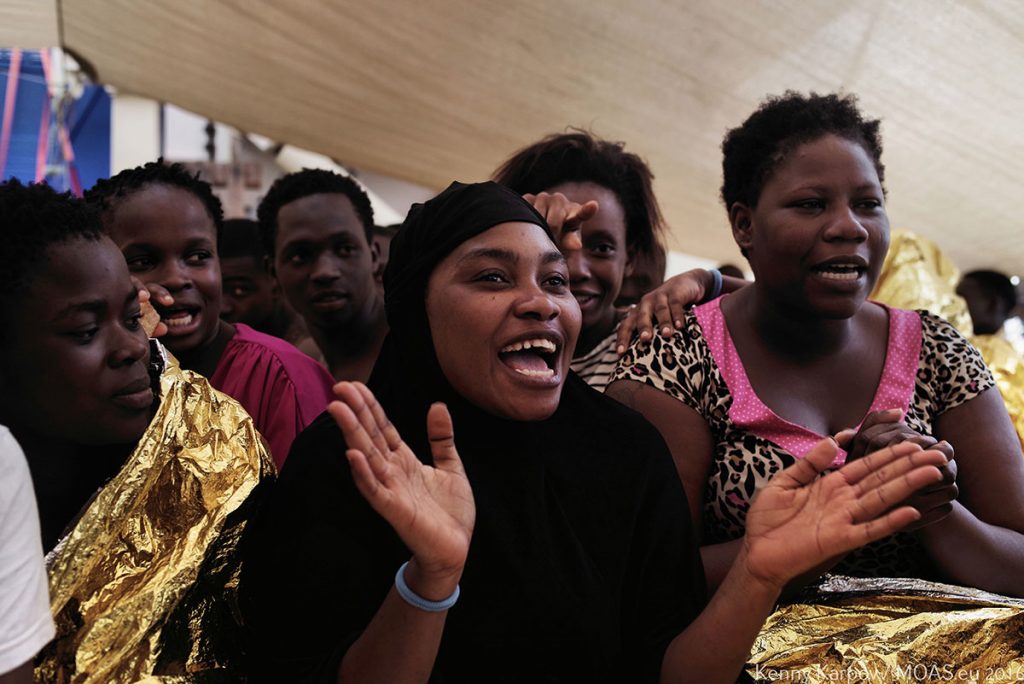 After a long and treacherous journey across the sea in a flimsy rubber boat crammed full of migrants wishing to find refuge, these women sing and clap as they sail toward Italy after being rescued by MOAS. Despite an uncertain future, they no longer face the imminent threat that the dangerous crossing presented and celebrate reaching safety with their loved ones. 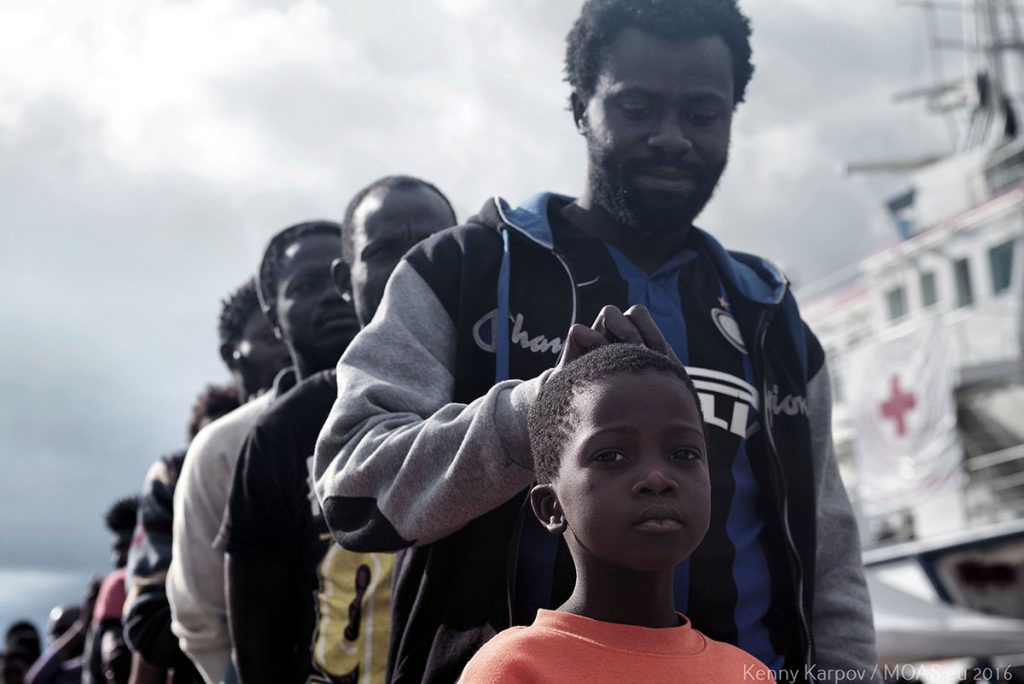 A young boy and his father wait in line to be processed by Italian authorities after being rescued by the Phoenix. He had also been traveling with his sister who tragically drowned when multiple people on their rubber boat fell into the sea. All his father hoped for his children was a future where they could safely go to school and live peacefully without having to fear for their lives. 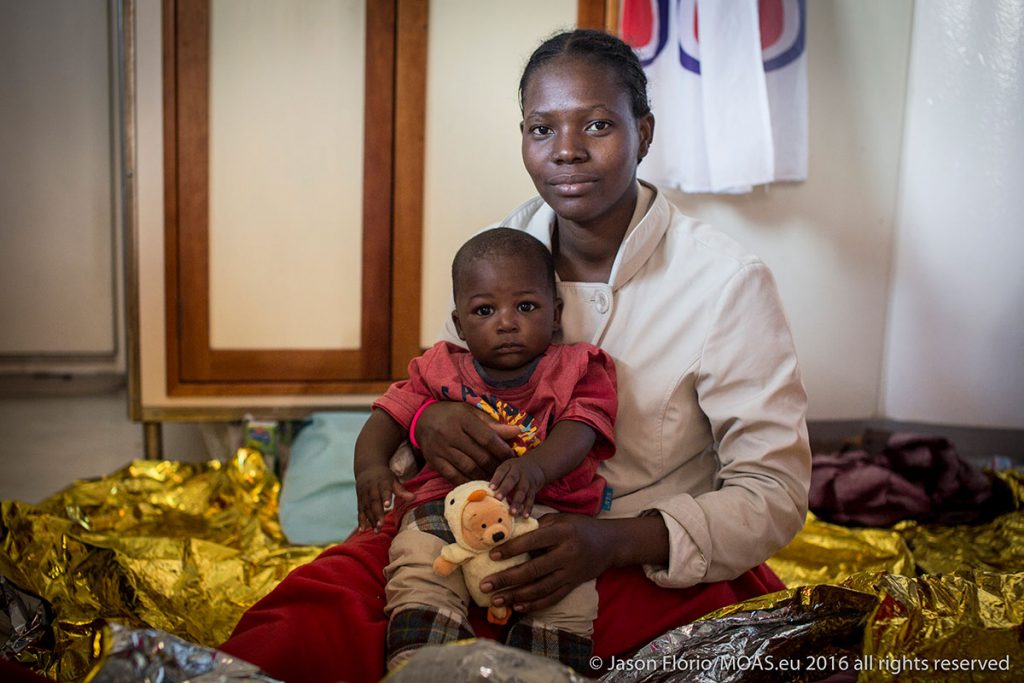 The revolution broke out in Libya and the civil war followed, making our life there extremely dangerous. The country is in chaos and when my son Chi was born, I felt too unsafe to raise him there. “My intention was not to come to Europe, but nowadays you have no other choice if you are stuck in Libya and want to flee from there.”
Yemi, like many others, moved to North Africa seeking job opportunities, but the life she had created for her family was quickly shattered when war broke out. She was rescued by our SAR crew on board the Phoenix when she fled the violence with her baby boy.

You can support MOAS’ work by donating here, or fundraise with friends to become a part of our activist community. You can also receive regular updates by signing up to our newsletter at the bottom of this page or following us on social media.