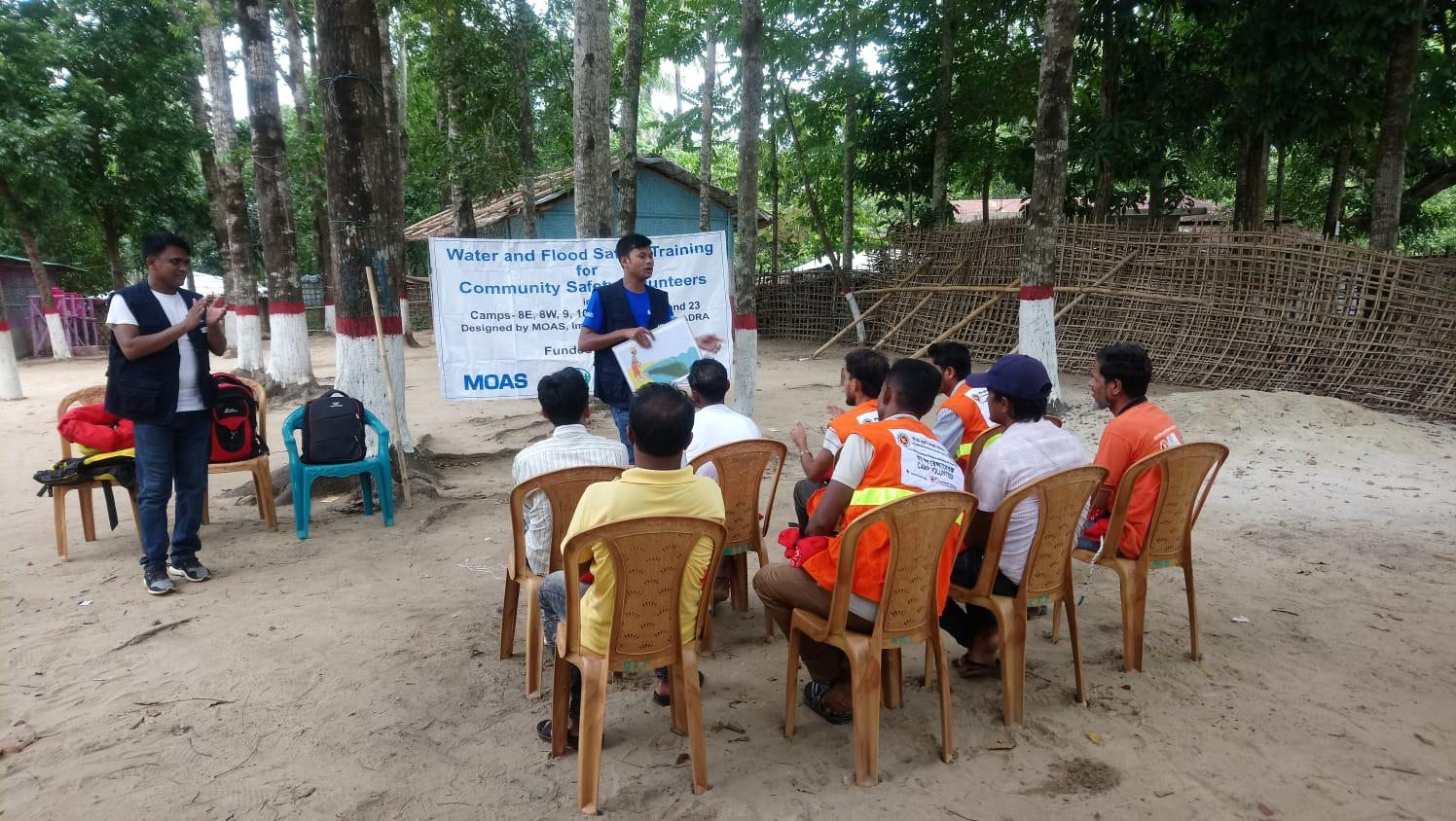 As we approach the giving season here at MOAS we want to document the perspectives of those people whose lives have been irrevocably disrupted by crisis, yet who choose to dedicate their time and energy to making their world a better place. We call this ‘civil society in action’ and this will be the focus of this month’s blog series.

Civil society refers to collective action, i.e. groups or organizations, working in the interest of citizens but operating mainly outside of governmental and for-profit sectors.  It is also sometimes called the civil (or third) sector.

This week we return to MOAS Bangladesh and speak to Salim who works as a cultural mediator and training assistant on MOAS’ humanitarian programs targeting Rohingya refugees. Salim was born in a refugee camp in Cox’s Bazar. His parents, fleeing ethnic and religious persecution in Myanmar, crossed the border from Rakhine State in 1991. Identity is often something hard to self-determine for communities who have been displaced over long periods of time, and especially those born into displacement. We asked Salim how he would describe himself and where he comes from. “I’m a Rohingya guy, I was born here in Ghundhum camp”, he replies.

Despite being born in Bangladesh and living there his entire life, Salim and his neighbors are not considered Bangladeshi, nor is that how many would consider themselves. Some of the Rohingya community has been in Bangladesh since the 1970s and the camps now host second and third generation Rohingya, as well as new arrivals.

Day to day life in the refugee camps is different than that of the wider community with issues such as limited movement and access, service provision, restrictions around education and employment making growing up in the camps a truly unique experience. We asked Salim what it was like to have lived his whole life in and around the camps, to which he replied: ““Actually, it feels like I am living in an open jail. I don’t feel safe here with my family. I have lost my parents, I wasn’t able to help them, because I need lots of money to help them.”

A lack of income-generating opportunities is a huge problem in the camps. Neither registered nor unregistered Rohingya refugees are legally authorized to work in Bangladesh. Those who escape exploitation still tend to seek employment opportunities despite the law, often out of desperation. They have been found to play a significant role in the region’s labour market, but they are not covered by any Bangladeshi labour protection laws. Hence, they are vulnerable to very low wages and unethical employment practices.

The influx of NGOs to the region does present some legal, though short-term, employment opportunities through Cash for Work (CfW) programming. CfW is a cash-based intervention which engages both refugee families and host communities in temporary activities in exchange for cash payments. Salim chooses to dedicate his time helping NGOs, including MOAS, run programs across the various camps of Cox bazar, both on a voluntary basis and as part of the CfW scheme. We asked what motivates Salim to devote his time to the work of the NGOs.

“I am married with two daughters and I would like to make my daughters the most educated they can be. Because of government rules here there are not many chances available for their education. I’m very appreciative of MOAS’ activities here and would like to work for MOAS in the future continuously.”

Under Bangladesh law, refugee children are not permitted to attend secondary school. Salim’s motivation to improve his community evidently stems from a humble desire to see his two daughters receive a proper education. His love for his daughters manifests itself into a commitment to create not just a safe and livable environment, but also a brighter future for his displaced community.

When asked what his dreams for the future were, alongside a proper education for his daughters, Salim replied: “I have a special dream in my heart is that I would like to visit MOAS’s head office Malta. Always praying from Allah for fulfill my dreams.”

NGOs and international agencies often rely on members of a community in crisis to act as mediators, navigators and strategists in the implementation of their programming to serve those very same communities. Working alongside community advocates, like Salim, ensures ecological validity, cultural sensitivity and reliable feedback for the projects. There is too often an assumption that crisis relief or response efforts are driven from outside actors inward, but in reality it’s a partnership that sees the international actors supporting local actors and communities in crisis to rebuild and repair.

If you want to hear more from Salim about his experiences with MOAS you can take a look back at the operational update published on the MOAS website earlier this year (read and listen to original recordings here).