A message from our Director: On its fourth anniversary, MOAS continues to be a lighthouse of hope 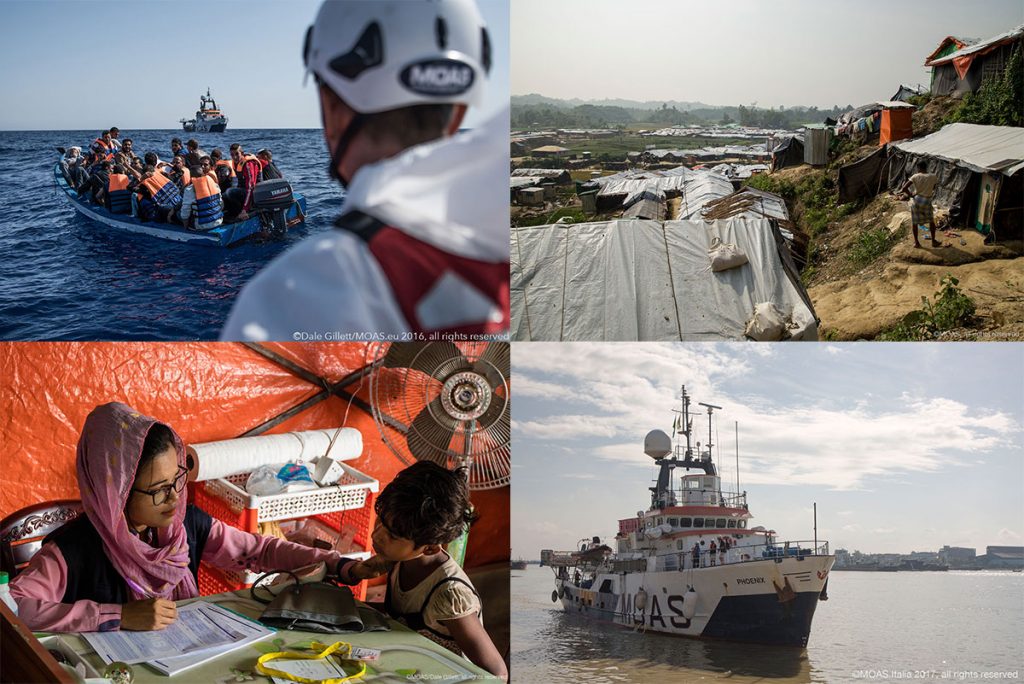 On the fourth anniversary of MOAS’ inception, it feels right to reflect and to sum up the challenges and achievements of one of our most intense years so far.

This time last year, we had reiterated our commitment to rescuing vessels in distress in the Central Mediterranean, the deadliest migratory route in the world. We had just signed the Code of Conduct proposed by the Italian government in order to reaffirm our spirit of collaboration with official authorities on land and at sea, as well as with other Search and Rescue (SAR) entities.

Soon after, Libya unilaterally declared its SAR zone, thus reinforcing the growing role of Libyan authorities in rescue operations. This led to a dramatic change in the maritime operational scenario for those working to assist flimsy boats and unseaworthy dinghies. Meanwhile, several thousand kilometres away, the latest military crackdown and wave of violence against the Rohingya minority in Myanmar, mainly in Northern Rakhine State, was triggering an unprecedented exodus. In just a couple of months, more than 650,000 vulnerable people sought sanctuary in Bangladesh, having survived inter-communal violence, desperate journeys, human trafficking and unspeakable abuse.

The change in the operational environment in the Mediterranean, combined with the appeal of Pope Francis who, on August 27th, called on the international community to support our Rohingya brothers and sisters, pushed MOAS to take action. Determined to continue our life-saving mission, we suspended our SAR operations along the Central Mediterranean route.  MOAS did not want to become part of a mechanism focusing only on preventing people from arriving on European shores without caring about their rights and dignity.

In compliance with our guiding principle to mitigate the suffering of the world’s most vulnerable migrant and refugee communities, we shifted operations to Southeast Asia. Upon our arrival in Bangladesh in September, we distributed 40 tons of humanitarian aid and opened two primary health centres, called Aid Stations, where both Rohingya refugees and local host communities receive free and high-quality medical assistance. Having identified the highest priority in to be the provision of essential healthcare, we opened our medical centres in the fishing village of Shamlapur and in the remote and poorly served camp in Unchiprang. Between October 2017 and June 2018, MOAS treated and assisted almost 69,000 children, women and men in extreme need of medical assistance. The monthly average of patients treated in Shamlapur is almost 4,500, while in Unchiprang it is almost 4,000.

Among our patients, 44% are children and 41% are women and girls who have often survived sexual violence. 54% of children are aged between 2 and 12, while the second largest group represented is aged between 7 weeks and 2 years old. A huge number of MOAS’ patients have never seen a doctor in their entire lives. At our centres pregnant women are given the best maternal care, including pre/post-natal care for their newborns. Furthermore, MOAS took part in vaccination campaigns under the guidance of WHO and Bangladeshi government to prevent outbreaks of communicable diseases.

MOAS’ work this year has not been limited to relief activities on the ground, but also included innovative aerial and maritime missions. In December 2017, we supported UNHCR during the aerial evacuation of 74 vulnerable refugees stranded in Libya. 51 children, 22 women and one man were then transferred to a safe facility in Niger in the hope of being further resettled. Between April and May 2018, the Phoenix was also deployed for an observation mission to document migrant and refugee crossings in the Andaman Sea, where in 2015 thousands of desperate people were stranded at sea by traffickers on so-called “ghost boats”. When the observation mission ended in late May, the Phoenix had patrolled 2,674 nautical miles and profoundly increased situational awareness in the region.

Looking to the future

In 2014, MOAS successfully completed its first rescue operation and since then has grown into a dynamic international organization. In 2017, MOAS further extended its scope to keep hope alive among the Rohingya people and adjusted to a new operational scenario on land. If 2014 was our starting point, 2017 marked a turning point and 2018 is proving our capacity to operate in increasingly diverse and challenging environments.

In spite of different scenarios and geographic areas, one thing remains always the same: our commitment to making this world a welcoming and fair place. The smile of a mother whose children are finally safe is the same all over the planet, and the joy of a father whose family receives the medical and food assistance they need is the same in every place on Earth.

In light of the world’s growing indifference to human suffering and humanitarian catastrophes, MOAS continues to be a lighthouse of hope and to raise up the voices of those too often ignored. MOAS bears witness to the strength, courage and resilience of today’s victims of violence and persecution.