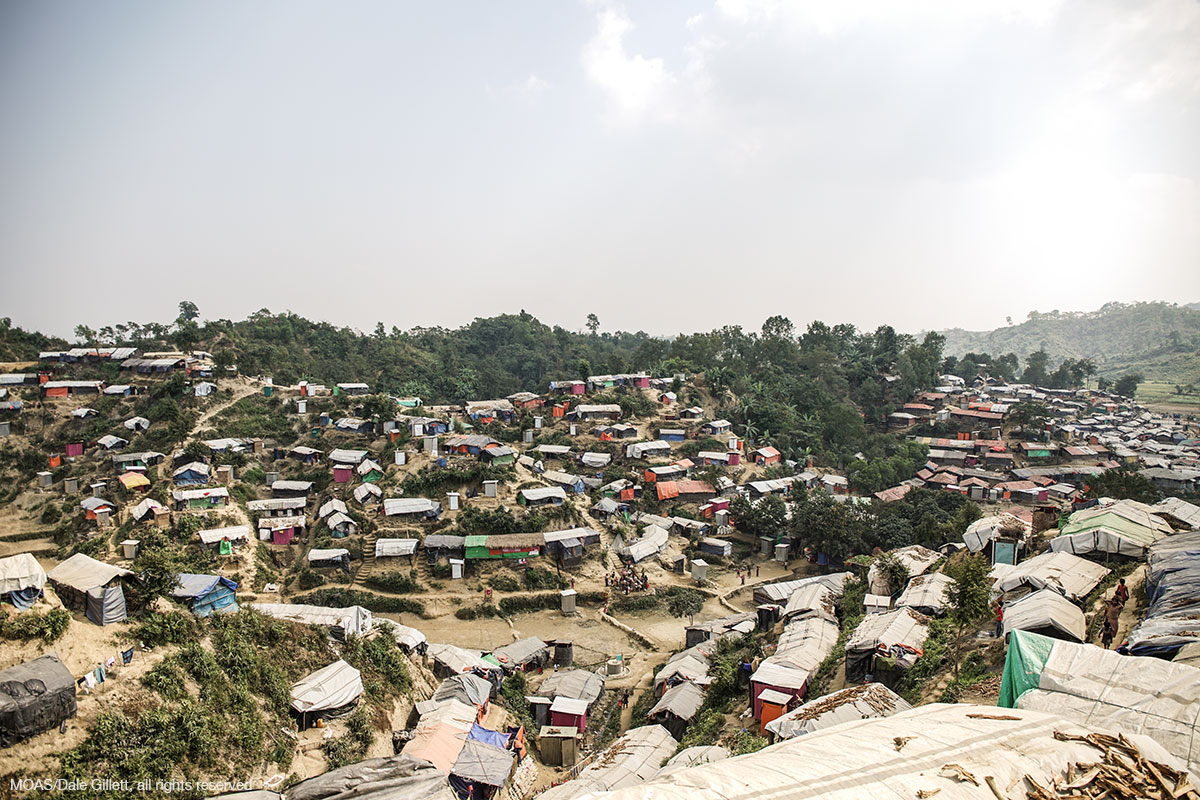 In a few weeks we’ll see the first signs of the cyclone and monsoon seasons in Bangladesh. Strong winds will whip up to one hundred kilometers an hour and heavy rainfall will flood most of the country, almost two metres of water in some places. It’s a natural event but this year’s season could come with a human cost greater than previous ones.

In this episode we’re going to look at why the cyclone and monsoons are dangerous to the Rohingya refugees living in Cox’s Bazar region. We’ll explore what’s happening on the ground, why it’s like this and how aid agencies are preparing for what’s being called ‘a crisis within a crisis’.

With rainy season approaching, attention is now on the land the Rohingya refugees are living on. Cox’s Bazar is a mostly flat region made up of rich soils deposited by annual floodwaters and bound together by thick forests.

But, many of those trees have been cut down to make space for and to build refugee shelters. Aid agencies and disaster preparedness groups are saying that this rapid deforestation has destabilized the ground. 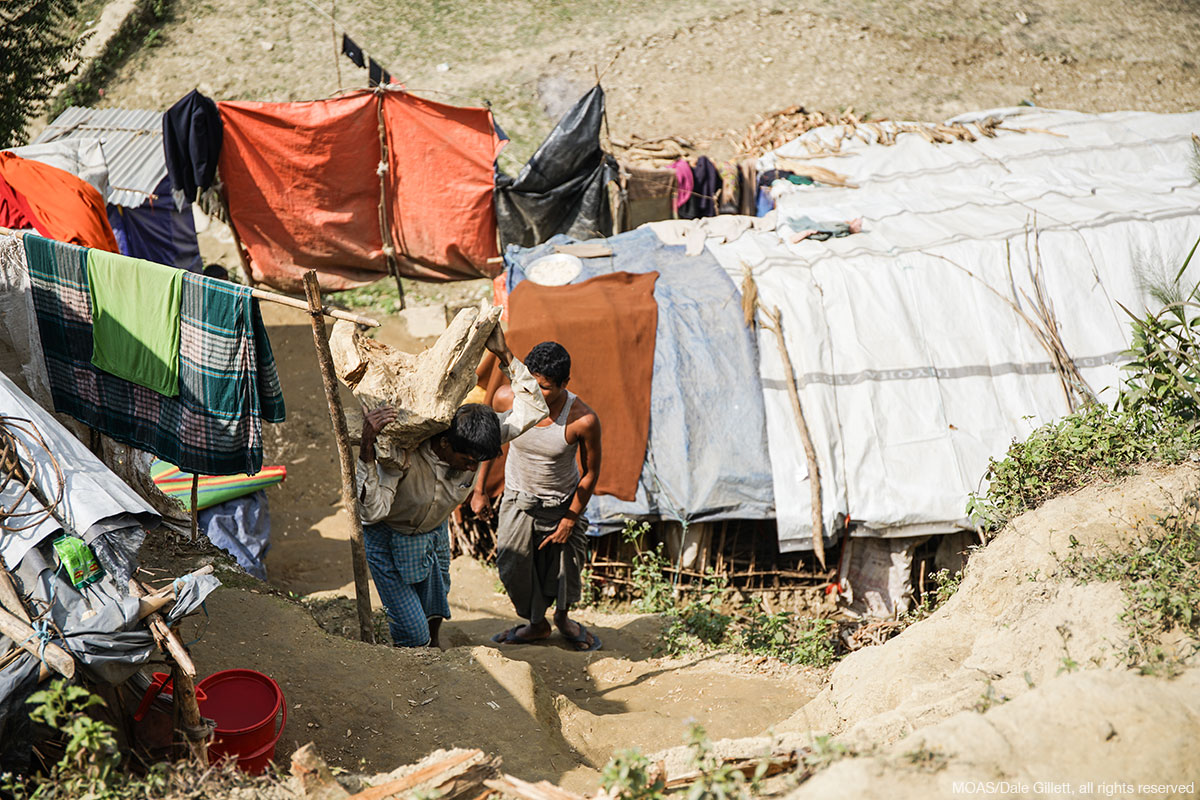 ‘The most important thing at this point really is to identity those areas in which there is significant risk.’

Dave Petley is the Pro-Vice-Chancellor of Research and Innovation at the University of Sheffield. He’s compared satellite imagery taken of the Balukhali camp from November 2016 and most recently 20th January 2018. The change is dramatic and spells danger.

What kinds of risks do you foresee coming from the deforestation and the coming weather?

‘This is an area that is monsoonal so we expect to see in this area heavy rainfall from late may through to October with the rest of the year being quite dry. We know from experience and from the work that myself and my group have done over the last few years that the monsoon rains in the upland areas of Bangladesh causes landslides and causes floods and these problems are particularly profound on steep slopes where woodland has been relatively recently removed.

The removal of the trees leaves bare vegetation, it leaves loose soil and all of that is increasing the likelihood of sliding and reducing the amount of water that is going into the ground increasing the probability of flooding. This is an area that looks like it’s quite prone now to landslides and significant floods and we would expect to see a relatively high incidence of both of those should there be intense rainfall, a sort of cloud burst event in this area during the forthcoming monsoon or indeed a subsequent one.’ 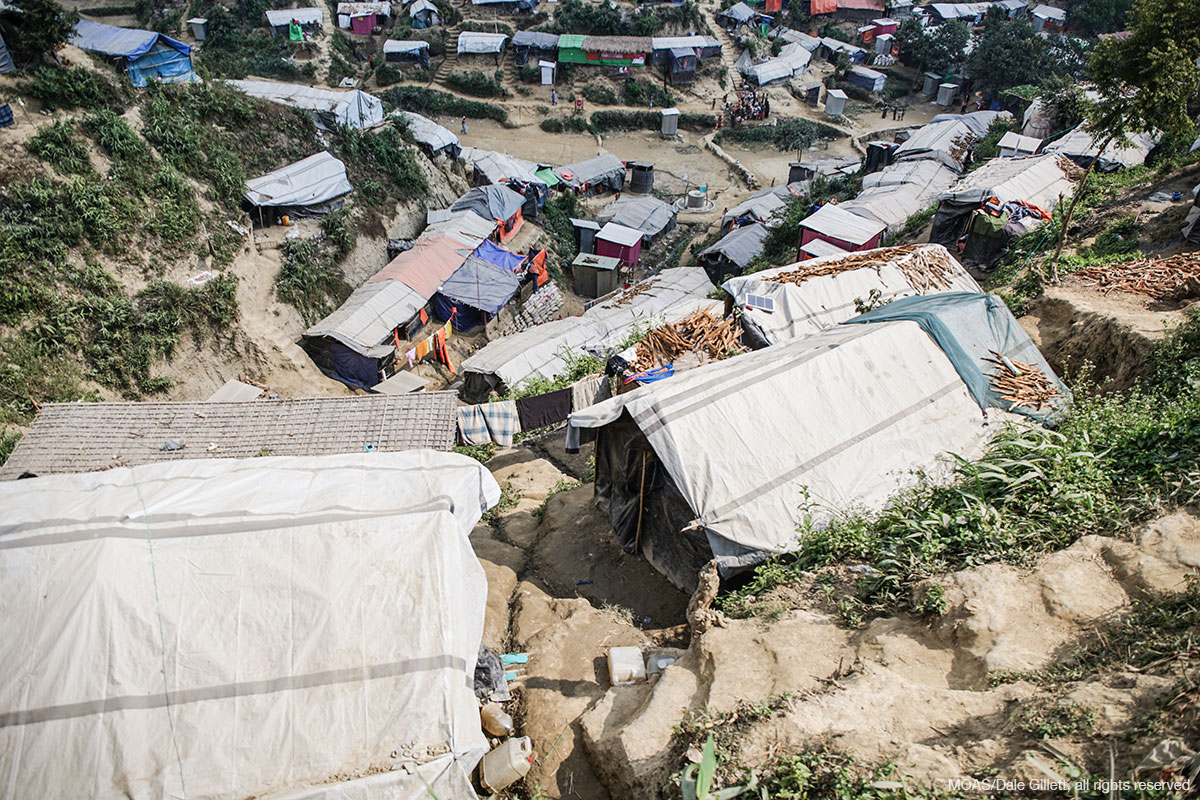 What kinds of preparations would there need to be to mitigate the damage and potential loss of life?

‘My view is that they probably need to do a series of things. The ideal would be to try to make sure that there aren’t people living in areas that are as high risk as this. That’s not very likely to happen given the humanitarian situation on the ground in this region at this particular time.

A second order problem or solution to this problem would be to identify those areas that are particularly prone to land-sliding and the work that was done by ADPC (Asian Disaster Preparedness Centre) and various others indicated that where the slope gradients are 35 degrees and greater, the risk of failure becomes significant and 50 degrees there’s a 50% chance of failure in a really heavy rainfall event.

The most obvious first order response to this would be ahead of the rainfall would be to try to evacuate the areas that are on or just below slopes with those critical gradients and those low-lying areas that will be subject to flooding. Ideally this would be done ahead of the monsoon but if nothing else, there ought to be identification of those areas and when heavy rainfall events occur, movements of those people over relatively short distances to locations that are safer in the short term is probably the best solution to reduce the likelihood in these cases.’ 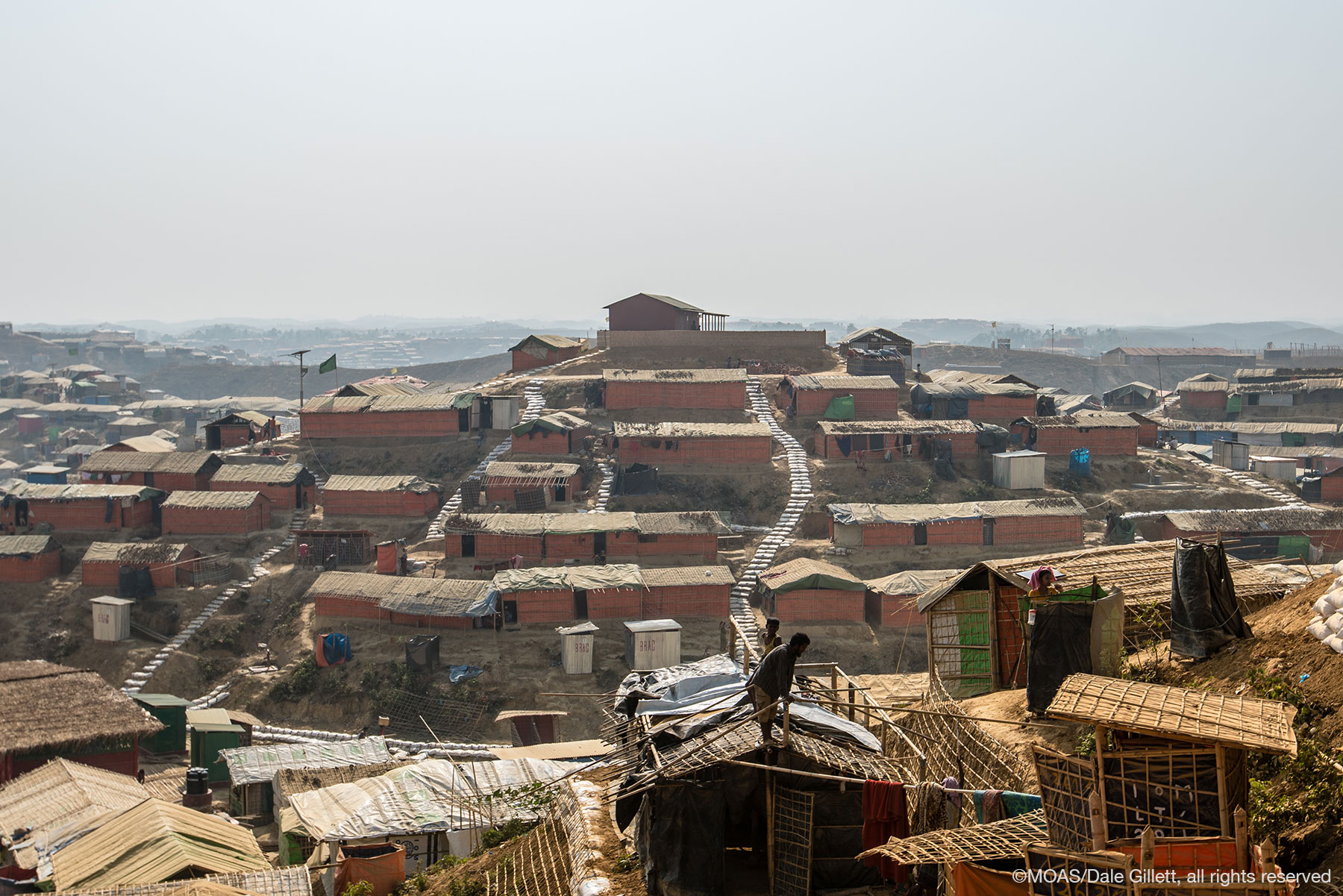 The Kutupalong and Balukhali mega-camp could be the worst affected by the flooding and landslides. It’s home to over half a million refugees living in cramped conditions. If the projections are correct around one hundred thousand of them are in danger of becoming homeless or worse. Paul Chamberlain is MOAS’ flood rescue expert. He was recently in Kutupalong assessing the situation and preparations.

‘We’re looking at people’s homes in the bottom of a drainage basin and its absolute madness the fact that this is the only piece of flat land that people have got so when it was dry that was where they chose to build their shelter but with the risk of monsoon and the flooding, all of these houses are at risk of being swept away.

There’s some kind of mitigation measures in place here, they’ve tried to build steps, the angle of the slope is critical.
The steeper the slope, generally the easier or more prone it is to landslide but what the steps do is reduce the loose debris on it so we reduce the risk of it being a slurry based landslide but we’re talking about huge huge quantities of rain so even if the steps remain intact, we look at this drainage basin, this area becomes flooded, that area becomes flooded.’ 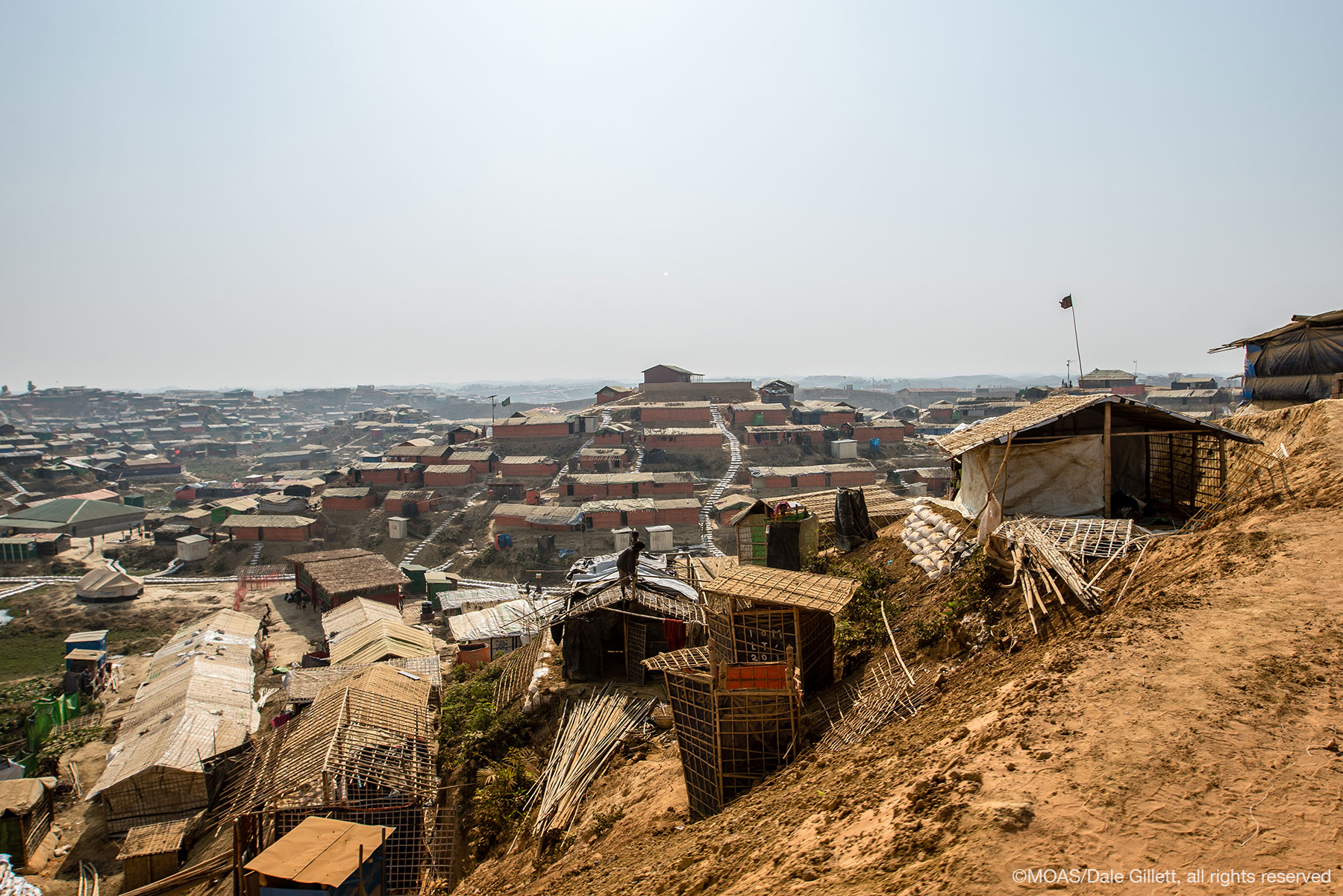 Aid agencies are moving people from flood areas, improving access routes and leveling slopes prone to landslides. But, getting people ready for a natural disaster is one thing, protecting them from coming medical threats is another. How do you prepare when one quarter of washrooms and latrines, almost half of tube-well water and other vital services are at risk?

Emmett Kearney is WASH Officer for UNHCR, based in Kutupalong. WASH provides medical protection to prevent illnesses like diarrhea but the coming weather is creating even more work for them.

Beyond those three key initial risks that we see, we have the acute watery diarrhea outbreaks. That’s expected with that large amount of rain this densely packed population and the very basic water and sanitation services in place. There’s a very high percentage chance of an outbreak of acute watery diarrhea also linked to the scale of latrines that need to be built and emptied.

This is another aspect that WASH sector is particularly concerned about emptying latrines and bringing that fecal sludge away from the settlement areas to a place be treated, we don’t have enough treatment capacity yet. Agencies are working as best they can to scale up but we’re going to be under capacity.’

Services could be damaged by the weather so what are you doing to prepare?

‘Since the initial influx everyone’s been well aware that the clock was ticking before the rain began so the emergency infrastructure that was put in place to deal with the 10s of 1000s who were arriving every day is being replaced because we need more semi-permanent or water and sanitation facilities that are more robust that can protect people and the water. We are doing construction of improved latrines with larger volumes to hold more waste, construction of improved water points drilling deeper into the ground and ensuring the wells and the hand-pumps were secured from contamination, scaling up our fecal sludge management so that’s desludging of latrines, transport of waste and treatment of waste.

We’re providing a lot of trainings for WASH agencies and for hygiene promoters on a variety of topics, acute watery diarrhea prevention, acute watery diarrhea outbreak response, improving the well drilling construction, having better latrine designs and we’re scaling up our general emergency preparations so that’s having contingency plans in place for all of the risks, pre-positioning of stocks throughout the camp.

With the rains we expect there to be more difficult access to get into the camps so having pre-positioned stocks like aqua-tabs which you can put into buckets of water to disinfect them or tools to be able to respond to the landslides when they take place.’ 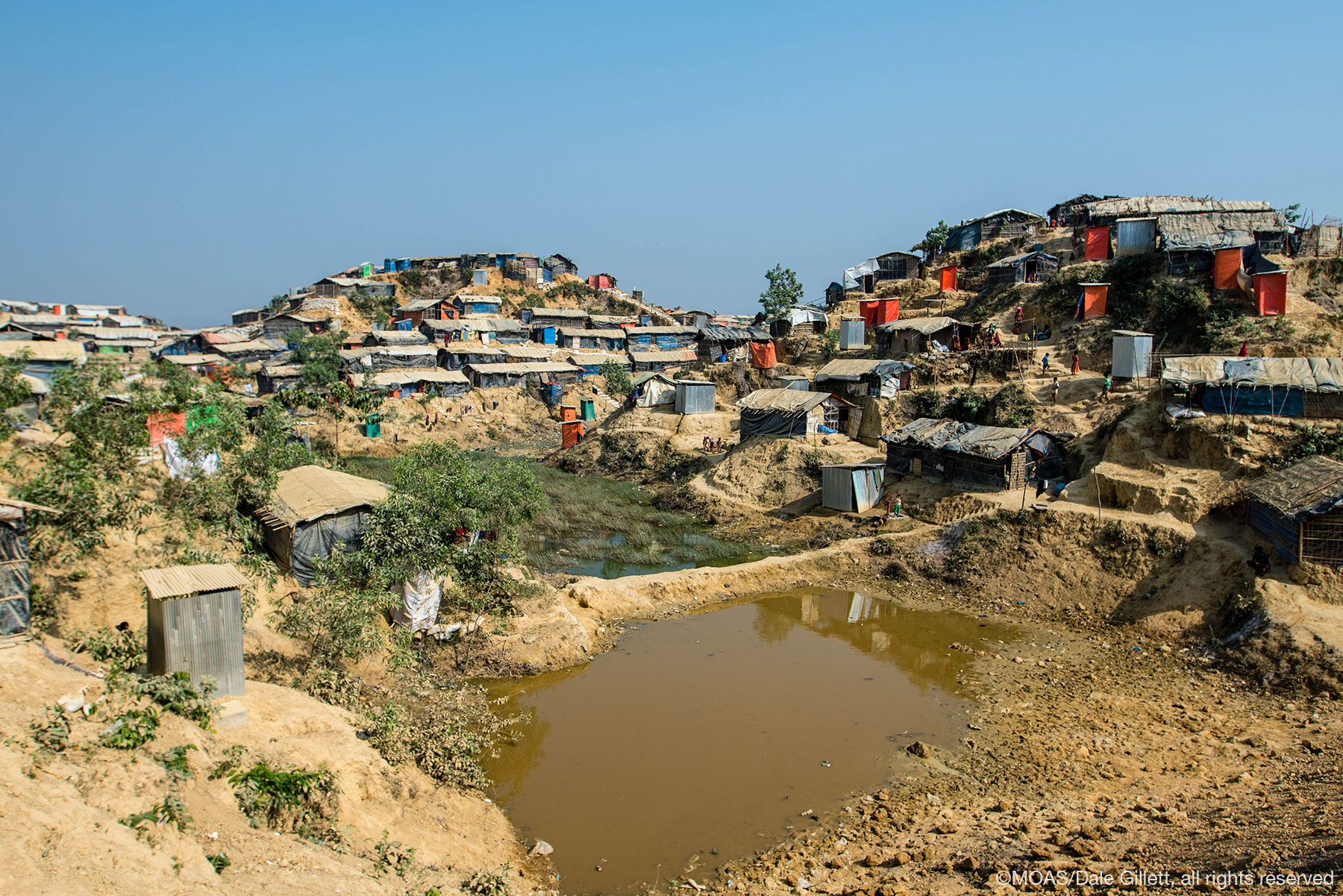 What if the worst happens?

‘You have to plan for the worst. You start with removing access.

Until now we’ve had a road cutting through the middle of the camp. We hope that its reinforced but we have to plan for losing access to that road because its newly constructed and from there we know that we need to have teams ready to go in case of flooding, ready to move in and move people to higher ground or move to other areas.

In case of acute watery diarrhea outbreaks the health sector has prepared treatment units where people can be brought quickly and on the WASH side we’re preparing messaging and hygiene promotion through community volunteers to pass the messages about what acute watery diarrhea is, how people can respond, where they can go to distribute different materials to reduce transmission.

To prepare for the worst you have to first sit down and imagine the worst and try and work through the scenarios of having no access of having different emergencies on top of each-other, cyclone and then flooding and then acute watery diarrhea disease outbreak and then you have to make sure that the resources are in place so that you’re able to respond.

The human resources, people are trained, the teams are ready, capacities are there, that the stocks are ready and the communication lines of coordination mechanisms are set up and people know who’s going to do what where, who’s going to decide the next steps.

All of these things need to thought out in advance.’ 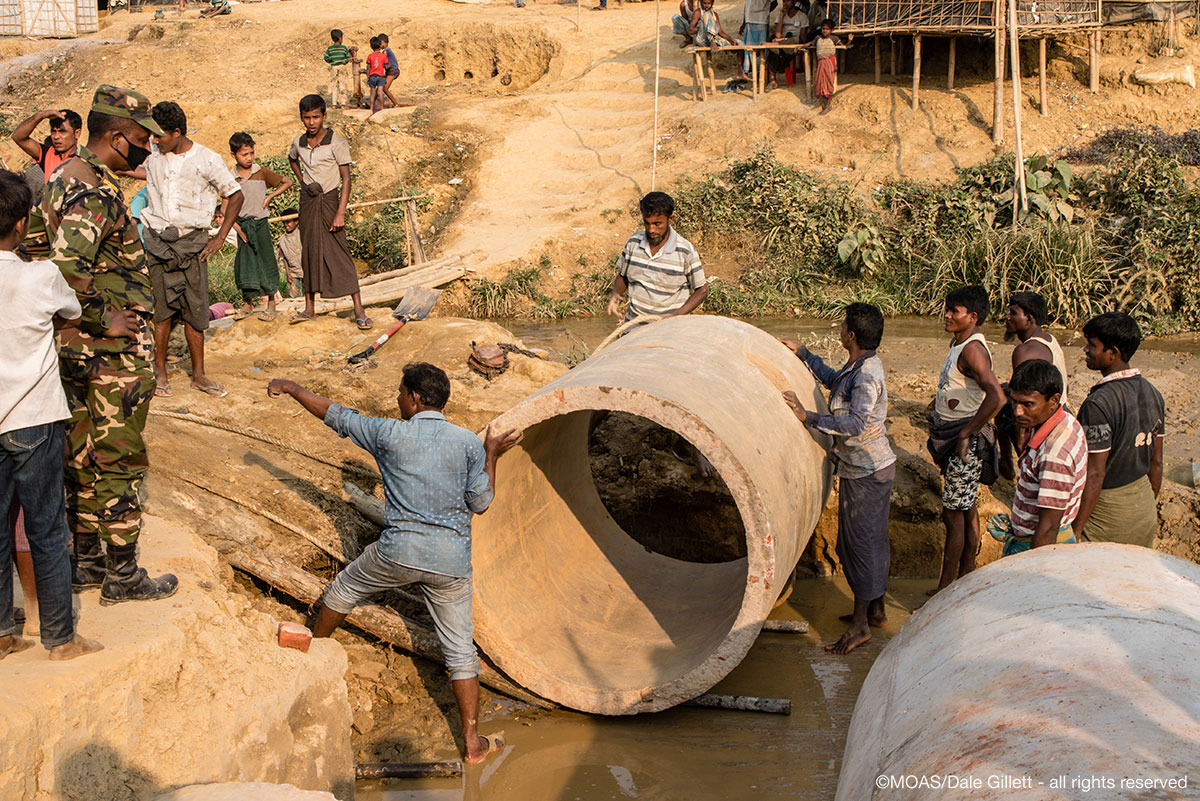 Just weeks from now, rain and winds will hit the Cox’s Bazar region. It’s been a top priority to shore up the camps for the flooding and landslides expected to devastate the refugee settlements. But, we don’t know how effective they’ll be until it hits.

MOAS has its own Emergency Cyclone and Monsoon appeal raising funds to continue helping the refugees during the season. You can donate by following the link here: