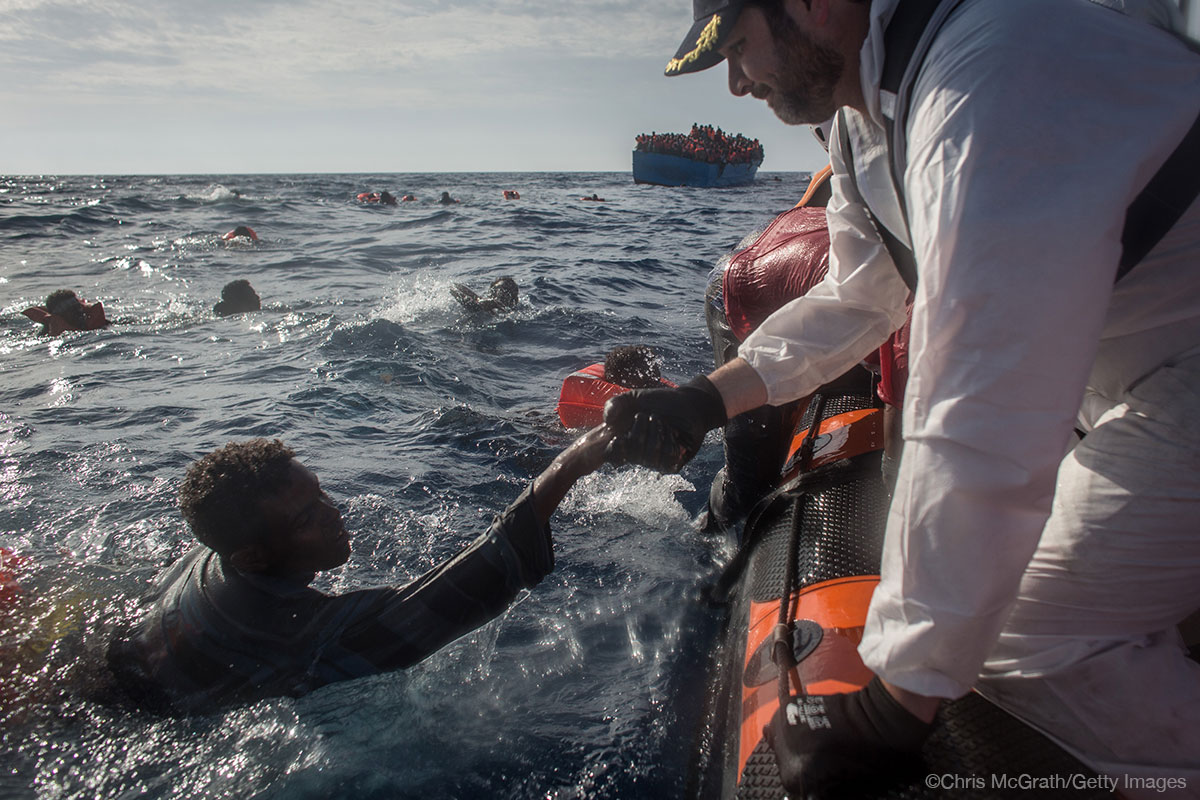 33 casualties on board, including 7 children, 14 women and 12 men, as boat carrying approximately 750 people partially capsizes in the mediterranean

24th May 2017 saw one of MOAS’ most tragic rescues to date. Overcrowding and sea swell tipped hundreds into the water during a rescue yesterday. 32 bodies were recovered to MOAS vessel Phoenix alongside 604 survivors, one of whom has since died on board despite our medical crew’s desperate efforts to save him. Several survivors are still in critical condition, including a 6-month pregnant woman who is being monitored for pregnancy related complications following the stress of losing her young son yesterday.

The MOAS aircraft began spotting vessels in distress in the early morning of Wednesday and the Phoenix’s RHIBS (rubber hulled inflatable boats) were soon after deployed to begin the first rescue. As people shifted on deck following life-jacket distribution a slight swell hit the vessel, causing it to roll heavily, washing approximately 400 people overboard leaving still hundreds locked below deck in the hold.

At this point the Phoenix issued a mayday relay to authorities as the MOAS RHIBs began pulling people from the water and other MOAS crew members attempted to break the locks into the hold of the wooden boat to rescue survivors from below deck.

An Italian navy helicopter appeared on scene to scout survivors, a Spanish aircraft deployed 3 life rafts and the Italian Coast Guard, navy and 2 commercial vessels approached to assist as many hundreds remained in the water. The numbers of people in the water made the rescue efforts increasingly delicate, requiring extreme caution and care as the rescue boats navigated the people and debris at sea in a hunt for survivors.

604 survivors were eventually embarked onto the Phoenix, both from the water and the hold of the wooden boat, following forced entry by the MOAS team.  Approximately 80 survivors were also taken on board by tug boat Gagliardo.

As the recovery operation for casualties began, MOAS’ post rescue medical team turned their attention to the survivors in critical condition. Three of the most critical patients, diagnosed to be suffering from broken and fractured bones and a 9-month pregnant woman suffering from complications (accompanied by 2 family members), were medically evacuated from Phoenix by the Italian Navy vessel Libra.

Despite tireless life – saving efforts by the MOAS post rescue team, one man eventually succumbed to complications on board and has passed away. A 6-month pregnant woman whose young child is among the casualties on board is also being monitored closely following complications related to her pregnancy.

“There are no words for what is happening in the Central Mediterranean right now. It is a horrifying tragedy that continues to unfold on Europe’s doorstep. MOAS is doing everything it can but alternative solutions must be found by Europe’s leaders if this continuing loss of life is to be mitigated.” Says Christopher Catrambone, MOAS founder who was witness to yesterday’s rescue efforts.

Finally, the Phoenix began its journey north with 598 survivors and 33 casualties on board and is due to disembark in an Italian port on the morning of Friday 26th May.

Regina Catrambone, MOAS Director, says: “We are all devastated by the needless loss of life yesterday, particularly that of young children. We strongly urge the G7 leaders currently meeting in Sicily, at the heart of this humanitarian crisis, to focus on implementable humanitarian solutions, rather than pushing unrealistic agendas centred around border control. As the Phoenix sails north today it not only carries the weight of the 32 bodies recovered at sea, but also the weight of the apathy of the global community and its leaders.”

About MOAS:
MOAS is a registered charity dedicated to preventing the loss of life by providing professional search-and-rescue services along the world’s deadliest border crossing – the sea. Originally founded as a private initiative in 2014, MOAS was the first NGO to set sail into the Mediterranean with the aim of rescuing migrants and refugees who were making the perilous journey from Libya to Italy. Since then, MOAS has grown into an international organization that has rescued and assisted over 35,000 children, women and men in the Central Mediterranean and Aegean Seas.

Photos are available from the Getty Images wire service.